Earlier this season, a small group of Beak Squad students did a robot quick build as part of our school’s two-week intersession. We chose to do a Level 3 Hab climb concept as we noticed that few (none?) of the Ri3D teams had attempted it. Our hope was to prototype a concept to help our own team understand a level 3 climb and to share with the FRC community for inspiration. We kept it relatively quiet because, frankly, I wasn’t sure we would end up with a robot at the end of our intersession.

Since then, our reveal video on YouTube (https://youtu.be/UQSIw8anUqM) has almost hit 10K views without us sharing the link anywhere. We are obviously very excited that it gained traction within the community and I have some questions for you all. Please respond to the poll below and feel free to add more detailed thoughts about the impact our video had on your climb design process. 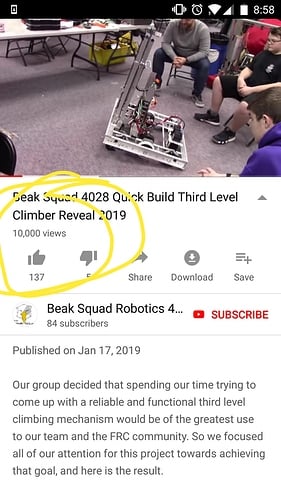 Looks to me like you can update that “almost 10k views” section.

I wonder if Steven should do a similar poll on his video from week 1?