It’s our team’s second year this year and we are starting to brainstorm some Drivetrain Types to experiment with/prototype during off season. What do you guys think the most beneficial drive types are? Please list some pros and cons as well.

Pros: Simple to build, effective in almost all games, customizable, very robust, and repairs are easy.

I thought mecanum or H-drive would be good because they are relatively simple compared to other drive types but are still agile and able to strafe. Octocanum drive also seemed promising but very complex for our abilities and tooling.

Gotta +1 this one. If you’re set on doing a custom drivetrain, this is what I would consider the best starting point. If you practice designing a WCD to the point where you get past all the hiccups you run into, the process becomes amazingly fast.

That makes a lot of sense. Our chassis this year was from the KOP and we have some issues with turning. It gets stuck when turning and rocks back and forth when stopping and accelerating. Any ways to fix this or prevent it from happening with future chassis?

If you want to make a robot geared towards outreach go shifting mecanum and put a chair on it.
Anyone can do a mecanum but doing one well means keeping it balanced so it isn’t a brainless out of the box build, it will take some thought and is a reasonable challenge. Adding shifting motors means you can have 4 different people learn about the assembly or one person practice 4 times plus some pneumatic work. Throw a chair on it and congrats you know have a very effective robot for outreach programs and community appearances. The looks of curiosity you get when people notice wheels on wheels, and the ability to sit on a chair that moves sideways makes for a good demonstration just about anywhere.

Quick question about your KOP chasis, did you give it some steroids?

I can’t say I’ve heard of turning problems like that on the KOP Chassis. It could be ground clearance or somehow having an improper center drop.

A slight amount of rock is to be expected with any 6 wheel drivetrain due to the center wheels being dropped slightly, though if there is extreme rocking you may have a weight distribution problem. If you really don’t like it you can put omni wheels in the corners and remove the drop entirely, at the expense of being more susceptible to pushing, or you could do an 8 wheeled drivetrain with the center 4 wheels dropped.

The first thing I would prototype is known as the Kitbot on Steroids. (See the link @IronicDeadBird posted.)

You take the kitbot frame, swap the transmissions to a 2-speed shifting transmission of your choice, and make other tweaks that you think you’d like to try.

To answer the rocking: The KOP chassis has a dropped center wheel on both sides when in 6WD configuration. It helps with turning, but you do rock a bit when accelerating. If you’re having trouble turning I might suggest wrapping one wheel on each side with tape, probably back or front, to reduce the friction and see if that helps.

No, straight from the KOP. We did have to replace the motors with the ones we got from last year’s kit of parts because the wrong motors were shipped.

Good idea! We will try that after our next/last commotion next weekend. Our robot is also relatively top-heavy. Could that be that issue and if so, are there any good fixes?

If you could share a bit more about your robot and post a picture or two, that would help for giving suggestions on how to move weight downward. 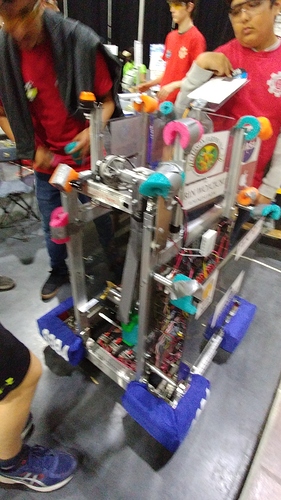 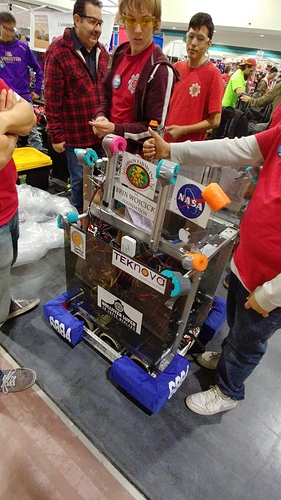 Also I limited the top speed of the motors to 0.7 in the code, so it isn’t even at full speed.

Stick with a kitbot drive chassis; I would definitely avoid anything custom.
Being on a newer team, you always want to look for what can improve your game the most, and the kop chassis is a pretty good drivetrain by itself, so custom isn’t necessary. Become masters of the Kop drivetrain. Programming it, make a really nice electrical board, and be able to disassemble and assemble a side in under 20 minutes. That way, next build season, you can get a drive train done (mechanical, electrical, and programming) in one week. If you design the electronics to be set inside of the drive base, you can build right on top. Your focus can be on mechanisms and drive practice early on, and that alone will give you an advantage on in 75% of teams.
Programming is often overlooked when considering your drive train. Factor in at least, if not more, time for your programmers to get the controls down really well. Encoders are definitely your friend.
6 wheel drop center is a really solid generalist drivetrain to start with. It may not seem as cool, but simplisity is your friend.

Also I limited the top speed of the motors to 0.7 in the code, so it isn’t even at full speed.

What’s your reasoning for this? I would just keep it at full to allow the drivers to send it at its fullest potential!

That was their request. I think they wanted it slower to have better control without the bot tipping.

Would it be good to make a custom west coast drive or regular tank drive during off season? I feel like doing something a little more challenging would be a good learning experience. I like your logic though; it makes a lot of sense

Is there a reason for slowing the drivetrain through software instead of mechanically?

Also, west coast drive all the way. It will stick with you for years.

This is something teams will do to intentionally reduce power output of motors to reduce thermal loading and make them more robust. You would gear the drive speed for the expected lower output RPM.

Simplicity. It would probably be better to change the gear ratios but like I said, it’s only our second year and most of our members are new.

It depends on what challenge you want.
This year, we started working on a redline drivetrain. We thought it would be cool, and give us a much needed edge over the competition. Over time, we realized that while we could spend most of the pre-season (and build season) trying to develop this redline drive, we could just optimize a kit bit chassis with not too much difference. The end goals:

Take apart and reassemble a side in 20 minutes.
Have extremely clean electrical work that fit inside the robot chassis.
Have encoders, PID driving, solid autos, and a robot that drove straight when you told it to.

To varying degrees, we developed the above, and it was a great choice. It was different than normal because many of the optimizations were taking something we somewhat knew, and trying to perfect it. We still have a long ways to go, but it’s something that students were proud of and is making a difference in our competition. Many of the above will transfer to any drive train, so it make sense to perfect those skills first.
Documentation is also key. Develop a substantial way for your team to continue to teach new incoming students. Once the students of your team are graduating, knowledge can be lost, so by developing a system for teaching new students the above, not only will that knowledge stay, it will grow.
Feel free to ask me any questions, and I’m happy to show you our drivetrain, electrical, and code if you would like.