Biggg Conga Line In the middle of the field. 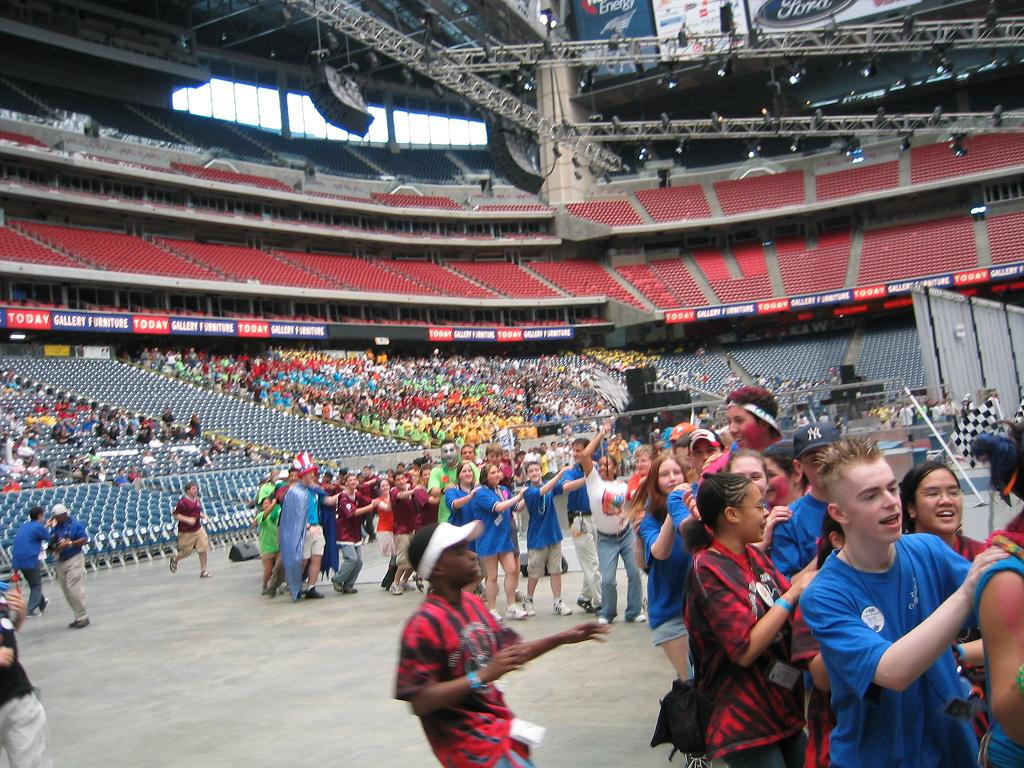 hehe. yeahs. i saw it all the way from the archimedes fields. good job. ehhe.

Ha, yea, I was a little shocked to see it from on top of the stands, but I am pretty sure I got the whole thing on vid, near the end, you all were wrapped around everything, it was confusing!

Yes things did come to a halt but not to admire the line. The Firemarshall was involved. Seems we were not suppose to leave the seating area.

Tigertrons (222) were at the championships. They had to leave because their plane was going to leave. Just so you know

The conga line was a welcome divserion from the tension of the matches… I believe the fields did suspend the matches for a short time while the conga made its way through, until the fire marshall kicked everyone back to their seats.

Please ignore the post made by CyberKnights195… he is a little annoying kid who cant deal wih defeat. Even tho we didnt win the award, it was still awesome, and it was more fun that anything. If you got the impression that my team was cheering just to get the award, please ignore that becausee that WAS NOT the reason… thanks!

There are many types of spirit, and the team that did win was spirited as well… Its hard to get a good idea of just how spirited everyone is becaue there are multiple fields and you really dont get to see all the teams. I was in your division and will agree that your team was very spirited, you never stopped chearing and making noise but i noticed as well a big part of your team was always in the stands. I dont think this is a bad thing in the least it just proves the point that you likely didnt have the chance to see a lot of the spirit in the pits, outside, and other places in the arena. On behalf on team Combbat (21) I applaud your spirit and it really looked as though you guys were having a lot of fun. We were seated next to you when we were in the stands and i often found myself being motivated by yours teams endurance. Good job, and dont let losing an award bring you down or think that you went unnoticed

That congo line was so freaking fun–I’m sad that they made us stop:( Houston rocked my world :)

yeah Wildstang!! You guys are awesome!!

Hey Ya’ll, hehe still got some texas in me.
i was right in the front of the line, with some my pals from our team, the conga line was by far the best, if anyone has any more pics of it or know anymore info aobut it, please try to sent to us.

Darn i missed the huge congo line, oh well, better luck next year. I was on the galieo field, so I had not gotten a break to get a chance to see the other fields and other experiences, although we still had fun.

As a team captain from Team 195 the Cyberknights, i’d like to appologize to the board for the mis-conduct of two of my team-mates. I hope we all realize this is a public forum and everyone has the right to speak their mind, therefore there should be no personal attacks. They just lead to flame wars between users and degrate from the usefulness of this forum. I would be lying if I said that I wasnt disappointed that we didnt win any awards however the judges made their decision, a good, fair decision and congrats to all the teams that won awards.