I noticed there has been quite a bit of confusion about the recent announcement canceling both championships and the season being over.
Well I found out through the power of google that they way the word “suspended” was used in the title means that already postponed events in districts and regionals can still be rescheduled because what the word suspended means is to temporarily delay so yes we will not be able to go to the world championship but if events are rescheduled we will be able to still play in an official competition but later the usual.
I hope this helps clear up some confusion.
Thanks, Quack

Here is a screenshot of the definition

I wouldn’t pin our hopes on a google definition. For now, my team is putting the robot in storage and focusing on outreach. Fingers crossed, we will get to compete once again though.

I would bet that the difference, legally speaking, is that “cancelled” means you get a refund, and “postponed/suspend” means you don’t, until later, when they’ll eventually officially cancel the event in a few months. I very much doubt we’ll be resuming the season in August.

The fact that “suspended” was used for events other than champs, which are “cancelled”, implies their is a difference. But things can be suspended indefinitely… so, yeah, don’t hold your breath.

Additionally, the word being used for all the major sports leagues in the country is suspended and they say they plan on finishing the seasons at some point or another. So, we may have hope.

also here is the definition of suspend from https://www.merriam-webster.com which should be a more reliable source 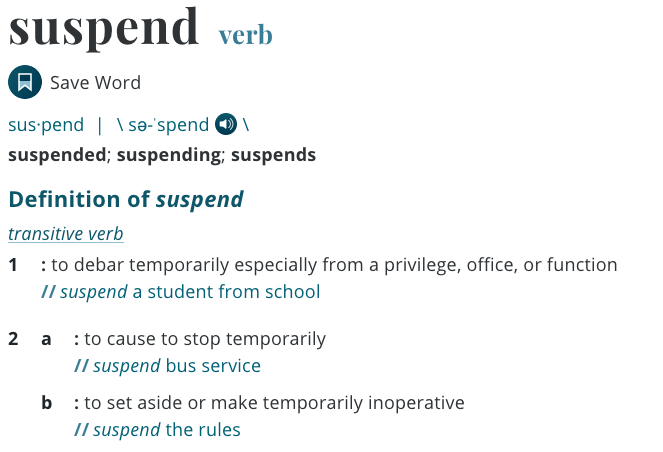 I think you nailed it. Lawyers will argue the definition of “is”. I would not go by an internet dictionary. Suspend gives more options than cancelled.

You have to look up the definitions in a law dictionary, not a regular one.

Keep in mind that when PNW was originally postponed, FIRST PNW stated that their events and DCMPS would happen in the fall. Just because all of FIRST is now postponed, that doesn’t mean that it’s cancelled; it’s likely going to be a case by case basis with each district and region determining whether or not certain district events and regionals can be rescheduled.

Obviously the internet has good resources, but it is still a bit of a jungle. The point remains that colloquial definitions and legal definitions can be different. Lawyers are happy to argue the point until you run out money. [snark] (The quickest way to make a Lawyer be quite is to stop paying them.) [/snark]

The NBA used the term suspended, as well. I suspect it’s the same rationale for FIRST. Some events may end up rescheduling. PNW has been open about attempts to reschedule in their thread. CHS already has a tentative date for their new DCMP in June. I double FIRST can or will mandate that each and every event reschedule, it’s simply not feasible. But some will, thus why the entire season isn’t cancelled.