Bracket to Decide the Worst Song Played at FRC Events

Inspired by this thread. I’ve created a bracket to decide, once and for all, what is the worst song played at FRC Events. I vow to that I will blacklist the winning song at every event I personally organize for the next 10 years.

I picked 6 contenders that I frequently hear cited as the worst song, and I will also add 2 write-in entries. Here is the bracket*: 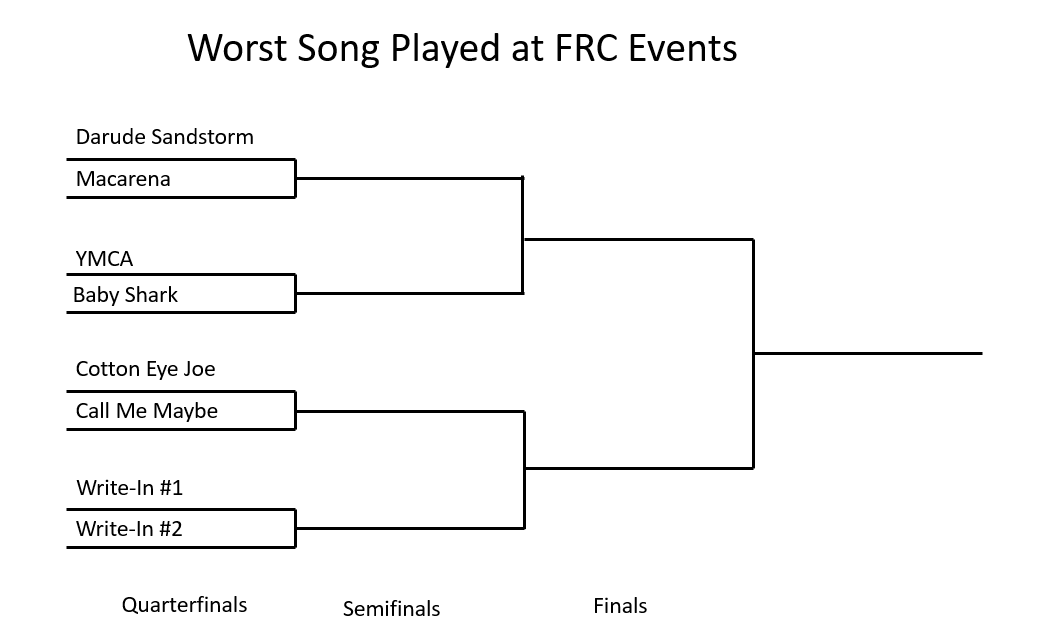 To add a write-in, simply respond with the name of a song that is not on this list. To qualify as a write-in, the post must contain only the name of one song (you can argue why it is bad if you want in another post). The song must also be one that is played commonly at FRC Events, I decide what “commonly” means and my decisions are final, go make your own thread if you don’t like the rules. The two write-ins will be the songs listed in the responses with the most likes/hearts (think of the hearts as broken hearts whenever you hear the song). The write-in with the most likes/hearts will advance to the semifinals, and I will put the name of both write-ins into the updated bracket on Oct 30.

Feel free to use this thread to explain why one song is worse than another. Let’s see what the worst song is!

Which is Worse? Darude Sandstorm or Macarena?

Which is Worse? YMCA or Baby Shark?

Which is Worse? Cotton Eye Joe or Call Me Maybe?

Explanation: this song made me realize squidward was right the whole time and that listening to SpongeBob say “I’m ready” all day would drive any reasonable person insane

Fitz and the Tantrums - HandClap

Explanation: there’s already a much better song telling everybody to clap their hands

telling everybody to clap their hands

I would like to take this post to pedantically point out that HandClap by Fitz and The Tantrums does not explicitly tell the listener(s) to clap their hands, but merely infers that they will.

Some may argue that this indirect messaging is the exact kind of thing that ought not to enter our good, literal song lyric FRC event music playlists.

Anything played at 4x the volume it should be played at.

Unpopular write in opinion:
Loud rap in general, not that there’s much of that allowed.

I used to be addicted to the hokey pokey, but then I turned myself around.

Shouldn’t this be a double elimination bracket to get the best results?

but then I turned myself around

That’s what it’s all about.

Seriously, none of these write-ins has any chance to unseat Baby Shark as the Worst Song Ever Played at any FRC event.

The Weird Al lunch song they played at champs

This. This song is worse than all others combined. It is completely in opposition to the entire idea of Gracious Professionalism.

It is completely in opposition to the entire idea of Gracious Professionalism.

And you can’t dance to it.

well, you could do the I’m A Little Teapot dance, I suppose.