Build a New Operator Inteface each year or not?

Check the following from the rules:

In the definitions:
OPERATOR CONSOLE – the Innovation First-provided Operator Interface unit and any associated equipment, control interfaces, display systems, structure, decorations, etc. used by the DRIVERS to operate the ROBOT.

And then:
<R81> Teams cannot use Operator Interfaces from previous years’ competitions

I would interpret this to say that you ARE permitted to use the frame, or any other components from last years CONSOLE except the operator interface itself. Of course, this has to be justified with COTS and cost rules.

You cannot use the Operator Interface, but you can reuse the ‘frame’. We built one out of 8020 and Lexan a few years ago and this will be our 3rd year of using the frame again. All we do is swap the O.I. and joysticks if we need to.

I think you will be OK if you use a frame from previous years. We have never been inspected about that…

Unless something wierd happens that I’m not expecting, I think this is what my team will do as well. We built a really nice little case last year (with a handle and all) from some Igus (I think-???) parts with the OI mounted on top. All that you could see on top was the joystick handles, the OI, and a box of switches we used to fire our shooter, turn our conveyor on/off, etc… I think we’ll just (obviously) switch out the OI, and take out the box of switches and put in the new ones we need for this year, but that’ll be it… I really want to put in a missile switch (with the flip cover and everything) for something in this year, but what, I don’t know yet…

We’ve used our frame for about 4 or 5 years now! It’s so simple yet effective we just haven’t worried about it. We’ll probably be making a new one this year though as the current on takes up the entire station area (which was a real pain to drive last year in the center station with our controllers tucked behind the center goal ball return chute)

We’ve been using the same frame for the past couple of years, just changing out the OI and some of the switches, we always seem to use the same joysticks though.(probably because they’re comfy or something)

I’m wondering, especially given the GDC’s emphatic stance on the six-week window this year, if reuse of even decorative parts of the operator panel is even allowed. The question came up at UCF last year, and it was allowed in at least one case I know of, but Last Year Is Not This Year.

Let’s liven things up on Q&A.

Is it permissible for a team to use the structural or decorative elements of past years’ operator consoles, provided that the OI is replaced with this year’s unit and any custom controls are fabricated after Kickoff?

I just joined a new team, but on my old team, their OI were a set of wings that was worn on the drivers back going up to the field from the pit (pretty cool…) This was reused year to year, except of course for the hole in the front that would continuously get bigger as I continued to create larger and larger Project Boxes full of buttons for the drivers

This is totally cool. The idea (I think… maybe up for discussion) that FIRST has is that the OI unit is replaced due to updates, and that modifications are made to controllers to better serve your robot, but if you have a theme or a solid design, you should not be required to change it. I think its kind of like a mascott; you don’t change that every year, do you?

Here is a picture of the old OI.

Sorry for the low resolution. It had to fit in 100KB for this post. 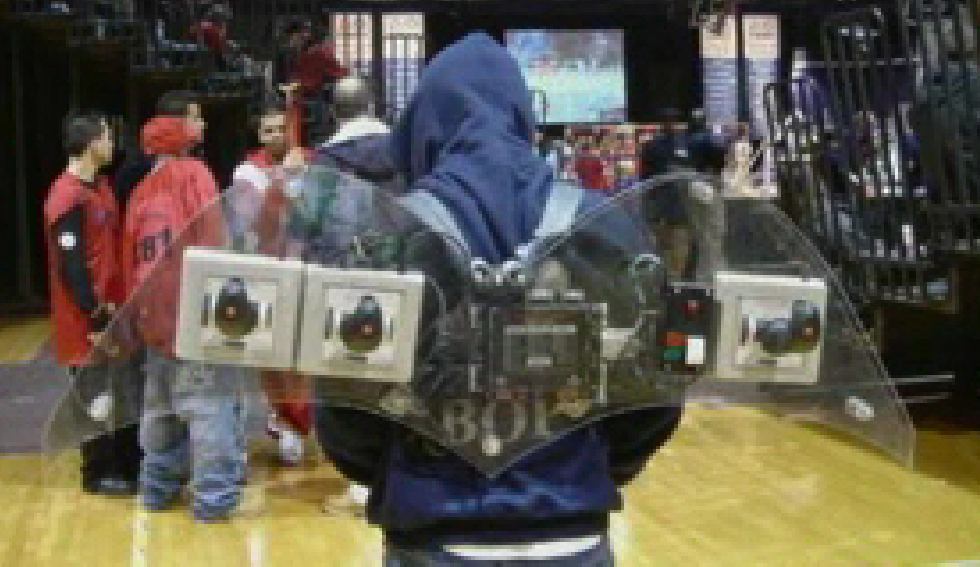 Here is a picture of the old OI.

Sorry for the low resolution. It had to fit in 100KB for this post.

Those are awesome. Hmmm. The ideas are flowing through my mind now for a new oi board

I don’t know if the rules require it or not exactly, but we build a new one from scratch each year anyway. It’s typically I think 1/16" alumunimum L brackets that are riveted together, with a sheet of wood for the bottom level and a combination of lexan and aluminum for the top.

Let’s liven things up on Q&A.

Quote:
Originally Posted by FRC1618
Is it permissible for a team to use the structural or decorative elements of past years’ operator consoles, provided that the OI is replaced with this year’s unit and any custom controls are fabricated after Kickoff?

I’m not seeing the Q&A question for this. Am I blind, or is it not there for some reason? Could you post a link?
Thanks!
Steven

I am thinking that rule <R11> means we now have to make a whole new operator console and cannot use any of it from a previous year:

However, for all other purposes the items listed above are considered part of the ROBOT and must
comply with all other applicable rules and requirements. In particular, these items are subject to
the shipping deadlines specified in Section 4.5.1.1 and must ship in the crate with the rest of the
ROBOT.

Am I the only one that read the new rule this way?

I am thinking that rule <R11> means we now have to make a whole new operator console and cannot use any of it from a previous year:

Am I the only one that read the new rule this way?

sounds like the rules could be read either way to me…