My team has tried quick release in the past but found that the latches that triple helix suggested broke really quickly. We switched to using bolts this year (and somehow managed to strip out a 1/4" long 1/4-20 thread in aluminum…) but overall had a much better experience without quick release.

How are you doing yours? I have a similar system using L channel but i’ve found that it’s time consuming and difficult to line them up with the drivetrain while making them

We use 1"x2" for our frame, with 1"x1" angle on the bumper above/below the frame. drill holes through the whole thing and drop the pins in. So long as the holes are aligned, it’s very quick and easy, and we’ve never lost a pin!

This is what we made for ours! It’s a knurled nut,
bolted to the chassis. With a bent R clip holding it on. The brackets are made from cut pieces of chassis with t- nuts behind the wood holding the bolts countersunk into the bracket. 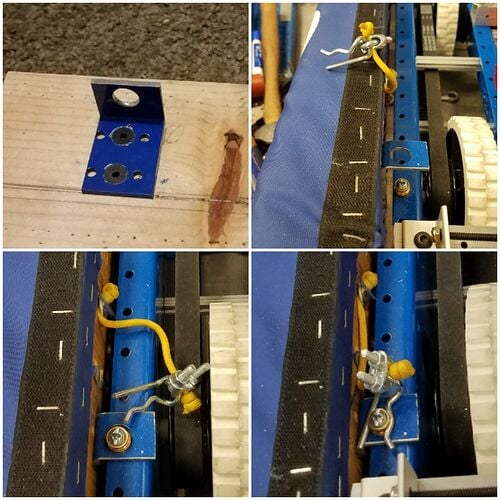 We’ve used toggle clamps a few times over the past few years. (I think this is the part but not sure). They hold down a lot of force but you will need a additional methods to make sure they don’t let loose from horizontal forces.
https://www.mcmaster.com/clamps/hold-down-clamps/compact-hold-down-toggle-clamps-9/

In the past we also used the triple helix method and really had problems with them. (But that was 2016 so I think everyone who tried quick release bumpers struggled.)

I wasn’t nearly as active in 2018-2019 but we used Delrin blocks on the bumpers that would fit into several vertical tubes on the chassis then put clips in. From what I heard from @NustinJewton these worked really well except occasional challenges of getting the bumper clips to fit in. They also had problems packaging to fit correctly with a swerve drive.

I really like this plus the the lanyard to keep the bumper hardware from wondering off.
I wonder if you could replace the knurled nut with a vbearing.

I don’t know if the rollers would be a problem or not. We went with the knurled nut because it was cheap at just under $1 each from Amazon. We liked the slide snap latches, but not overjoyed with the price. So I went looking for something that was less expensive, but could still work the same way.

I can’t find the exact name of them right now, but we just switched to using these click on attachments (the red circles) and we like them a lot. We’ve pretty much hated every bumper attachment method we’ve ever had, but we finally like these. They’re quick and reasonably strong, and they don’t involve any small parts that some kid puts in his pockets and then they disappear.

We used them previously to attach some internal components that we wanted to be easily removable and they worked well, but we were concerned about using them as bumper mounts. However, we’ve been to two regionals with them and really put them through their paces, and they’ve held up very well.

The only downside is that they weight more than the other options, but if you aren’t near max weight, they’re a viable option.

Could a bolt with a larger diameter, say 3/8", be used in place of the screw with the knurled nut? A hole would be drilled in the bolt for the R-clip.

It’s crazy to me that bumpers have been a mainstay in FRC since 2008, and 14 years later there still isn’t a universally agreed on effective method of mounting bumpers. I maintain that bumper mounting is still one of the last FRC engineering challenges that have yet to be completely solved.

Better yet, our group seems to dislike all options, so every year we cycle through a different one of the options called out above.

Probably in part to bumpers being an afterthought for most teams.

With all the advances in motor power available, I’m suprised bumpers haven’t gotten an upgrade tbh.

Anecdotally, I would have to agree. Many/most teams treat the bumpers and their mounting system as an afterthought. Since many of them are in a hurry to get the bumpers done each season, it is likely they implement the last idea they heard about that season.

For years we’ve gone “bumper shopping” at regionals, asking other teams with nice looking bumper mounts if they like them, and the answer, pretty universally, is “no, we hate them, we’re doing something different next year.”

My personal favorite method right now is a method I saw Team 696 use at Beach Blitz in 2021. Whether it will still be my favorite method (or even one they continue to use) is to be seen. It’s good, but it’s still more effort than 0, and I do love things that are 0 effort.

My team recently switched to using https://www.mcmaster.com/quick-release-pins/ring-grip-quick-release-pins/ in the KOP chassis rails for holding the bumpers. We have an angle bracket on the bumper side that the pin passes through. We haven’t competed yet, but it has worked during driver practice.

I maintain that bumper mounting is still one of the last FRC engineering challenges that have yet to be completely solved.

I expect that’s because of the differences in frames (KoP frame versus everything else people come up with). AndyMark has a reasonable kit for mounting bumpers (I saw reasonable, because it can definitely be done differently for quicker bumper swaps), but I very, very rarely see teams use it properly. Most teams miss the difference between the front/back and side bumper mounts, and specifically step 10 from AndyMark’s documentation: 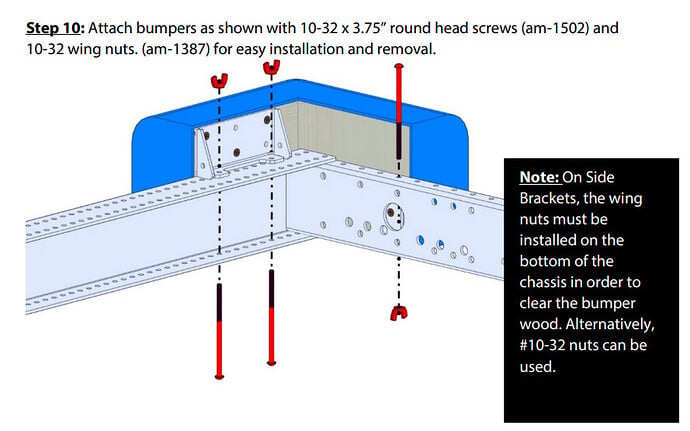 Instead, they put the front/back mounts on the side as well (and ignore the side mounts). Given the hole spacing there, that forces the bumper plywood a fair way off from the frame for the entire length of the robot. I’d love to see a cheap, quick, hard to screw up alternative for teams!