R33 states that there can be no gap from the frame that the bumper covers longer than 8 inches. Our wheels are 8 inches and as I understand it the wheels are not included in the frame. How are we supposed to have gaps of less than 8 inches? I have a picture attached of our current bumper mounting system. 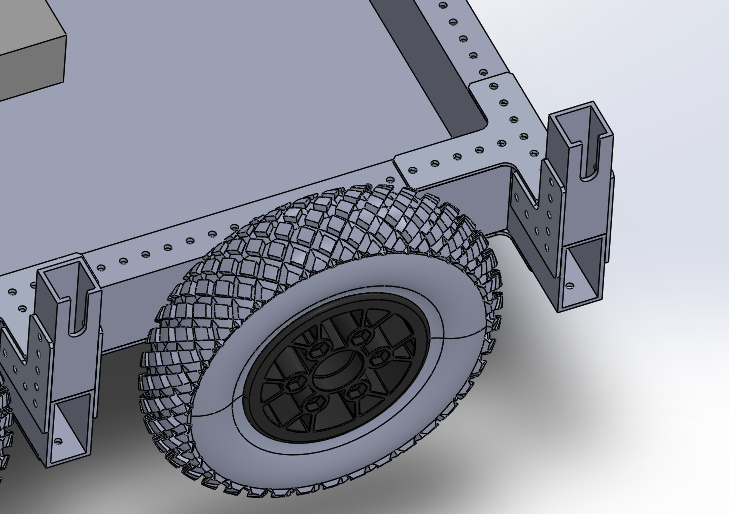 Add some material that defines your frame perimeter. Angle, polycarbonate, sheet, just something that sits outside the wheel.

We normally add a 1x1" tubing (the thin stuff from vex) rail that runs the entire perimeter of the robot for bumper mounting. As pointed out you will need to make some modifications as the bumper rules require them to be lower this year. 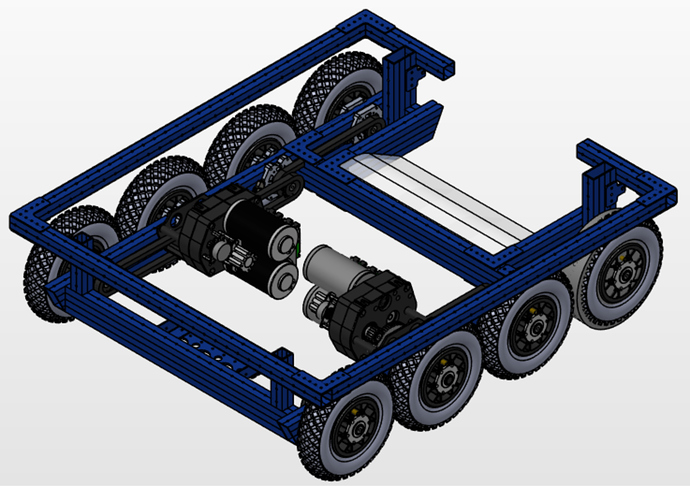 Doesn’t that make the top of the bumper higher than 7 inches?

Yes, that example I showed was from 2016 where the rules were different. For this year you could make a cut out at the position of the wheels or somehow else make it so the wheels can still be removed.

It may be neccessary to move your wheels in from the frame perimeter if you cannot fund some other geometry that satisfies the bumper rules.

Question: What is your CURRENT Frame Perimeter measurement?
Because I think you can solve your issue with a 1/8" strip of metal, if you’re careful about it. But you need to make sure you have the Frame Perimeter available to do it.

If your current perimeter is within 1/4" of maximum, make some frame changes first. But it’s important to note that R33 doesn’t specify how strong the Frame Perimeter is, just that it backs the bumpers.

A better method would probably be to recess the wheels more and put angle brackets in between the vertical risers.

Tie a piece of string from one of those tubes to the other. Prove me wrong.

If you are so tight on the FP that you don’t want to push out any farther, you can add “wings” to your risers, even made of 1" square tube that actually backs and supports the bumpers, if you wish. At 6" above the ground, an 8" wheel is about 5.6" wide, so there’s plenty of margin to be able to get the wings within 8" of each other. You can do even better if you miter cut the ends.

There does seem to be some odd wording in the rule.

R33. BUMPERS must be supported by the structure/frame of the ROBOT (see Figure 10-8). To be
considered supported, a minimum of ½ in. (~13 mm) at each end of each BUMPER wood segment
must be backed by the FRAME PERIMETER (≤¼ in. gap). “Ends” exclude hard BUMPER parts
which extend past the FRAME PERIMETER permitted by R31-B. Additionally, any gap between the
backing material and the frame:
A. must not be greater than ¼ in. (~6 mm) deep, or
B. not more than 8 in. (~20 cm) wide

I think in this case Frame Perimeter refers specifically to the physical structure of your robot that that imaginary line or string is coincident with. The bumper rules could use some clearer wording all around. There’s just needless ambiguity that leaves too much up to interpretation for teams and RI’s.

How can an imaginary line, or a piece of string, support anything?

R1. The ROBOT (excluding BUMPERS) must have a FRAME PERIMETER, contained within the BUMPER ZONE, that is comprised of fixed, non-articulated structural elements of the ROBOT. Minor protrusions no greater than ¼ in. (~6 mm) such as bolt heads, fastener ends, weld beads, and rivets are not considered part of the FRAME PERIMETER.

The frame perimeter is comprised of structural elements.

Tie a piece of string from one of those tubes to the other. Prove me wrong.

You can prove that a piece of string is a “structural element”?

It appears that this is something that they intended to allow. But, the bumper rules are really left over from previous years where this was either not allowed or not a useful thing to do. Correspondingly, they have not been fleshed out.

So, for example, R1 says that the elements of the Frame Perimeter must be “fixed,” “non-articulated,” and “structural.”. Q&A 11 asked abiut the “fixed” part of that - the pieces of the Frame Perimeter are fixed relative to each other, not necessarily to any other part of the robot. But, we have not gotten similar guidance about “non-articulated” and “structural.” Presumably those are also in relation to each other, but that’s not clear.

You can imagine, for example, a design where the entire frame perimeter (and the bumpers attached to it ) articulate out of the way. Allowed? Probably, but not 100% clear yet.

You can simply add 1/16 poly or AL right over the face of that wheel between your supports. The crazy part about the rules is structural stability of that frame perimeter is not defined so anything can close that 8 inch gap. Like the post above, Even a piece of string would technically count although I don’t recommend trying it. They cant prove that wrong but they can still force you to change it at inspection.

Yes, its part of the structure. It does not carry a load but its an element. The rules do not speak to size thickness, strength stability, etc… I fa sting does not qualify would a 1/32 X 1" piece of AL satisfy the rule? Where is the line in the sand?

I think I’m going to use a solution similar to this and many of the other solutions where I add something past the wheels, but does the metal sheet (or etc.) have to touch the whole bumper vertically or just part of it?

You can simply add 1/16 poly or AL right over the face of that wheel between your supports. The crazy part about the rules is structural stability of that frame perimeter is not defined so anything can close that 8 inch gap. Like the post above, Even a piece of string would technically count although I don’t recommend trying it. They cant prove that wrong but they can still force you to change it at inspection.

One of our local powerhouse teams ended up having to do this to meet the letter of the law so they could pass inspection last year. If I recall correctly, it was a 6" piece of polycarb that was supported by the frame tubes at only one end.

I’m fairly certain you can’t articulate the bumpers relative to the frame. Is there a Q&A question about this?