Has anyone attempted to attach the bumpers to their robot using neodymium magnets (in this case, 1/2 x 1/8 inch disc magnets)?

We would be attaching the magnets through an 1/8 inch aluminum plate.

with the amount of impact the bumpers will be taking this year due to the lack of safe zones i doubt that would be a great idea.

E. must attach to the FRAME PERIMETER of the ROBOT with a rigid fastening system to form a tight, robust connection to the main structure/frame (e.g. not attached with hook-and-loop or tie-wraps). The attachment system must be designed to withstand vigorous game play. All removable fasteners (e.g. bolts, locking pins, pip-pins, etc.) will be considered part of the BUMPERS.

I’m not sure I’d consider magnets to be a “rigid” fastening system, nor a “robust” connection. If you can apply enough force by hand to detach the bumper, that much force will happen some time in a game.

But I’m not an inspector.

I wouldn’t pass you if I could pull your bumper off by hand. You also have to take your bumpers off and put them on for inspection. This would mean that your bumpers couldn’t be permanently attached by magnets either. Was there a reason your team wanted to use magnets as a fastener?

I would say no, magnets are not a rigid fastening system. They may be hard to pull off, but they’re much easier to slide. One glancing blow and your bumpers would slide out of position. Then when your team was rushing to get off the field and someone grabs the bumpers to lift the robot, they’ll either come right off… or worse, hold long enough that the robot falls and hits someone!

I think there are ways to do this and make it work very well.

Magnetic jigs can get some really good contact forces.

But do make sure that you “get it right”… expect your inspector to “vigorously” test a novel bumper attachment system. Then get the judges to give them a pull so you can show off your innovation, and explain why your new design is better than the old one.

Just make sure it works… it isn’t better if it doesn’t work!

As an inspector, I would be cautious about passing this. I might allow you on the field to see how it does in combat, with the understanding that if you have any problems, the Referees would kick it back to the inspectors who are going to make you do something more permanent.

Novel idea, but not yet convinced it is a good idea.

Dr. Bob
Chairman’s Award is not about building the robot. Every team builds a robot.

I think this could work.

But, there are right and wrong ways of doing this. If it were me, I’d design it so that sliding forces (in all directions in the plane of the backing) are resisted by some sort of edges—for example, if the magnets are recessed into the frame, and the bumper backing has steel plates that stick out slightly and fit snugly into the recesses. I’d also spread those points of contact so that pushing on the top edge can’t lever the bumper away at the bottom edge. Finally, I’d pick very strong magnets. Not too strong that they can hurt you (much), but strong enough that you can’t pull it apart by hand. Then I’d devise some sort of lever action or sliding mechanism to disengage the magnets from within the frame. (For example: pull a tab to slide the magnets upward and out of the recesses, then the bumper falls off. Another example: design cams that push really hard on the bumper backing, using some sort of suitable mechanical advantage. It might look strange if you have to pull out an extra-large Allen key to take your bumpers off, but it will be worth it.)

As for your proposed size of magnet, you should do the calculations (and have those calculations handy at inspection). With enough of those (my gut feeling without doing the math is 16 to 24 per side), this could work.

The standard in the rules is “a rigid fastening system [that forms] a tight, robust connection to the main structure/frame (e.g. not attached with hook-and-loop or tie-wraps)…[which is] designed to withstand vigorous game play.” I don’t think that categorically excludes magnets.

But I’m not an inspector.

You (as a referee) could always invoke T07 to enforce a robot rule, especially if the bumper is clearly not up to the job during gameplay.

I am an inspector.

If you stand on the bumper and it doesn’t come off, it’s ‘robust’
Any magnet I can imagine, through 1/8" aluminum, will not be nearly strong enough.

If I were you, save the magnet money and use something else.

Hopefully these diagrams clarify what I was thinking. One set of several steel plates is mounted to the bumper plywood with countersunk screws (not shown). The other steel plates hold the magnets, and fit down into vertical slots against one face of the frame rail.

As described above, you don’t want the magnets to be obstructed by 0.125 in of aluminum. You want the magnet, directly between two steel plates, making contact with both. The first plate is the backing of the magnet (on the robot), and the second plate is attached to the bumper.

As for magnets, choose something like this, then pot it in metal-filled epoxy (e.g. Devcon or JB Weld) in the recesses of the magnet backing plate. It has over 19 lb[sub]f[/sub] per magnet in this configuration. To pull it straight off, you’d need 475 lb[sub]f[/sub] (likely more than the pullout strength in the wood). To lever it off by pushing at the top edge (e.g. in a robot-to-robot collision), you’d need something like 237 lb[sub]f[/sub], not accounting for the resistance offered by the edge of the bumper-mounted steel plates in their slots, or the fact that the opposing robot would be pushing on a rounded pool noodle. If you stand on it, the downward component of the force goes into the slots in the frame, while the magnets pick up the horizontal component.

As for the magnet backing plates, they pull straight up, with a wiggling motion, to remove the bumpers. (Grease their faces to make this easier.) 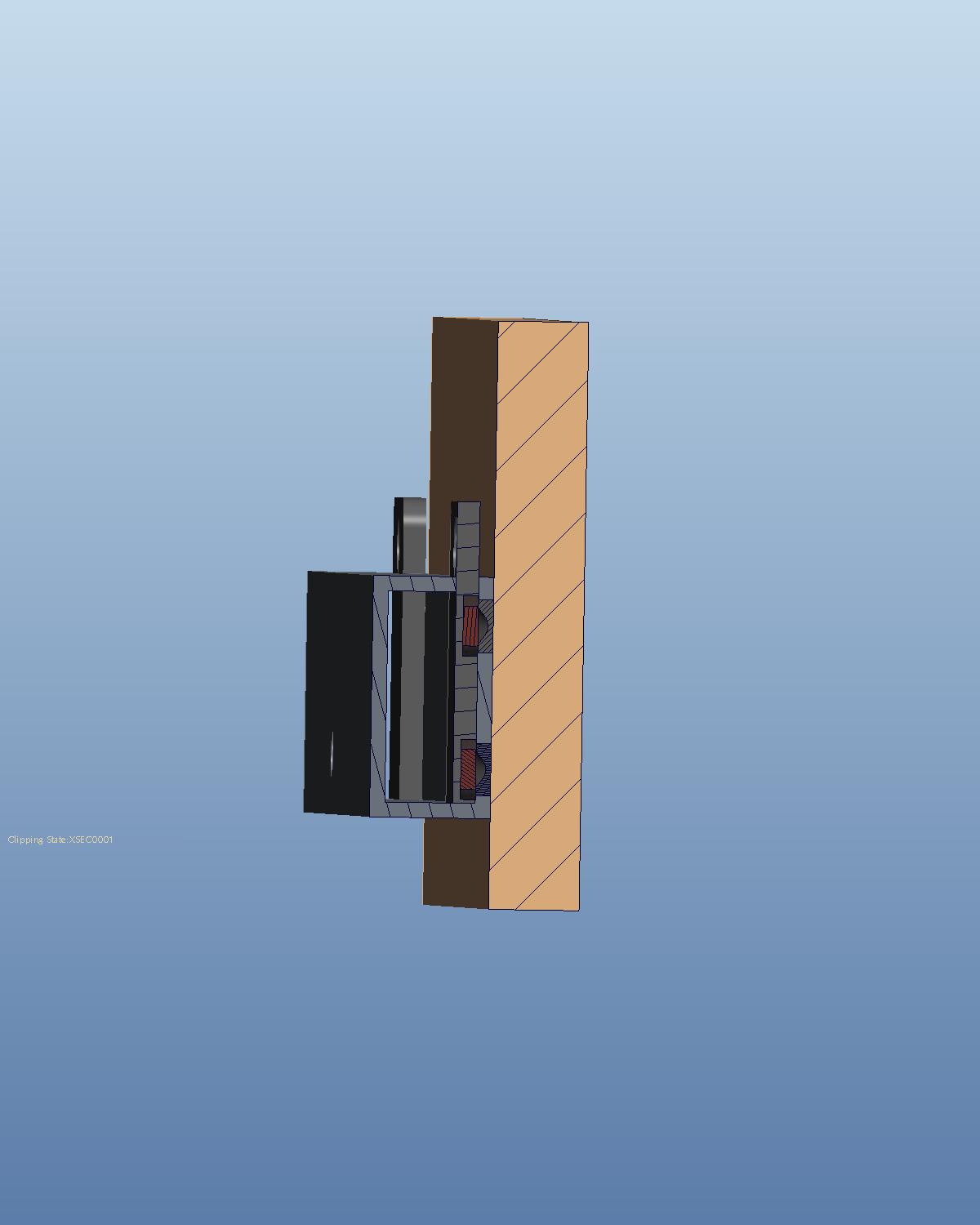 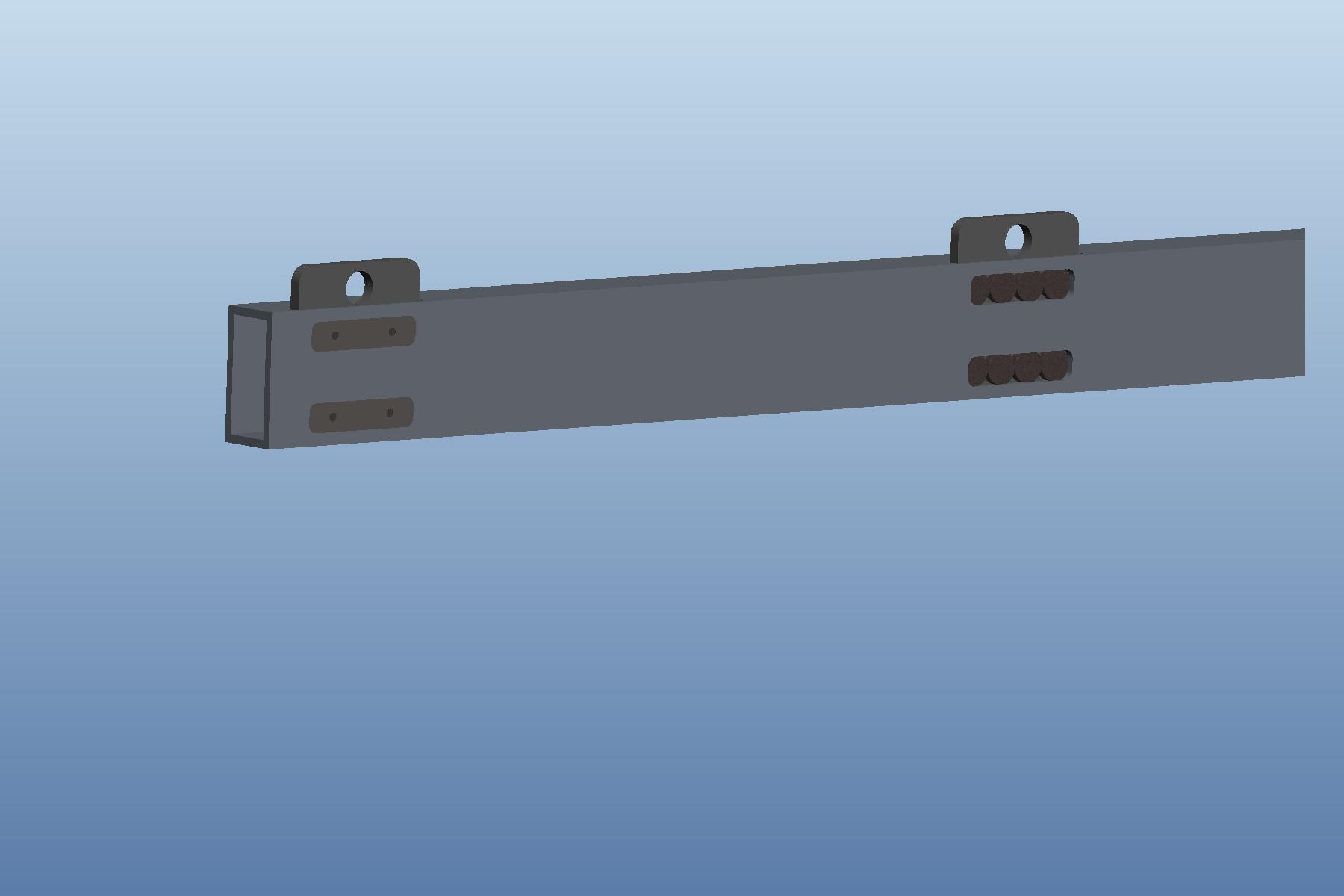