We have decided to go full bumpers this year (all around, no gaps, Everybot style). But we are not sure whether we should go a single bumper and have a cover go on and off, or 2 bumpers swapping the entirety per need. I (personally) dont see an easy way of putting the cover on as easy as bumpers with gaps. I feel like they would be more prone to being ripped off. Not to mention, we are planning on using some slickier material?

If any team has had experience with this, please tell me what you’ve learned.

Here’s a thread on “nice looking bumpers”, in which I posted a video about how we do bumper covers. We’re not the only team that does this, but any stretch, but as far as I know we’re the only one that has done a video on the technique. Basically, they’re a single set of bumpers with reversible covers that flip along a verticle central seam. It makes them really quick and easy to change and you only need to have one set on the field, even with quick turn-arounds between matches.

832 has used a single set of bumpers with a foldable flap, one side red, the other blue, for years. (well, 3 bumpers actually, but a single set).

This year we are going with two sets of bumpers, red and blue.

Sewing the flap was an act of wizardry by a team parent, and while we never had a penalty, the flaps never really stayed as closed as we would prefer, despite a boatload of Velcro.

The key this year is our design incorporates an easy way to mount (and unmount) bumpers, likely in under 60 seconds by one person. So if you can dream d=something like that, flaps are unnecessary.

Get rid of the idea that a ‘skirt’ will be sufficient. It wont.

We will not build any reversible bumper types. We dont have the sewing skills for that, and if it was reversible vs cover, the team would choose cover. BUT. That was if there were gaps/separate bumper segments. This year, it’s full 360.

We’ve used a similar design bumper most years, which is 4 full length pieces. Each has two 5/16" bolts sticking out, from the inside. The bolts we use are “fanged elevator bolts”, look them up on McMaster-Carr. We build some type of bracket that is attached to the top of the robot frame, and the bolts go through the brackets. A nut at each end of each bumper holds them on, they are relatively easy to change, usually takes a couple students a couple minutes.

There are more sophisticated ways to accomplish this, but we haven’t felt like changing. 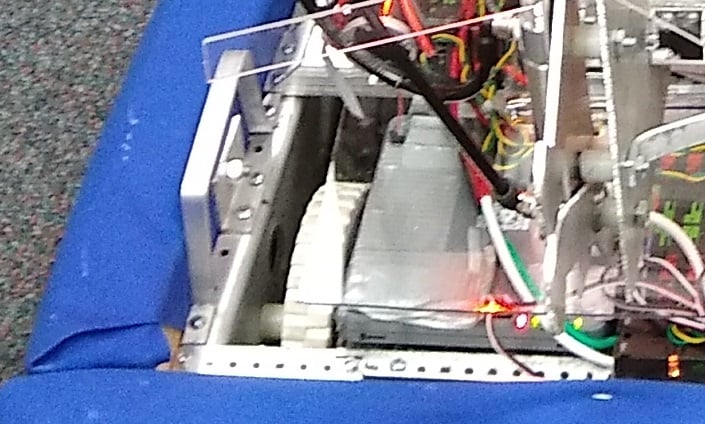 Two sets. If your bumpers go all the way around, all you need to do to secure it after lowering the bumpers into place is put in about four wing nuts or bolts from the top roughly equally spaced around the perimeter.

Let me ask the question a different way:

Would you be willing to pick a team to be on your alliance knowing very well that the robot has a bumper cover that may or may not be loose? From all my years and watching the video @Strategic linked, any type of cover is guaranteed to not have a tight fit. In our case, our cover would literally be a circle (we are not going to the circle bumpers) since our corners are rounded and not square.

An circle oval does not perfectly fold onto a rectangle. Even with all the velcro you can use.

I would pick a robot that performed and was reliable in as many aspects as possible. If your bumpers pass inspection and won’t get you penalties or disabled on the field, then alright. However, why fight this battle? Making two sets, now, well in advance, is a great solution.

Its a battle between me vs mentors…

They don’t want to make 2. I think it’s because we’ve always done base bumpers + covers as far as i remember.

We mentors are a stubborn type

And our bumper covers worked by having a corner/edge to be able to grab onto. Rounded corners? No cut outs? Lols.

My last employer was a subsidiary of a large multi-national. Many of the lifers had worked there over 20 years and were always saying “we traditionally do it this way” when presented with a new way of doing something. Sometimes (often) the traditional way was not at all a good way to do something. I shared this link with some of the newer people working there. Afterward, when someone used the word “tradition” in a meeting, a bunch of us would smirk at each other.

We have always made two sets of bumpers. In part because we also make 2 robots but mainly because it is simpler. The reversible bumpers requires sewing skills we do not currently have on the team, and they can be less robust. Seems like an easily avoided penalty. Typically go with full coverage, 2 piece “U” shaped bumpers.

We us a post and R clip system for mounting. Very simple, robust, and fast to change. 4 clips per bumper section, 1 Pit Crew member can swap them easily in under a minute.

The flip bumpers I have seen have either looked really, really good and stayed securely in place or they looked poorly made. Those teams that cannot make them really, really good should consider either finding out how to do so or make 2 sets of bumpers.

Another consideration is if the physical construction of the bumpers is not great, they can come apart during a match, leading to the robot being disabled. This happened several times at the two Houston area events last year. A single set of flip-type bumpers will see about twice the abuse that either of a pair of red and blue bumpers will see so it is more likely to come apart during a match.

As bjtheone said it is also a practical matter for us that we build two robots (practice and competition) so for cases where both robots are up and running at the same time, we need two sets of bumpers anyway. All of our drivebases tend to stick around year after year, either in the original form of the robot that we built that year, or as a stripped down development/testing platform, so we need the bumpers to stick around.

We do make a set of (purple!) slip covers that become “dress bumpers” for pit display and demos. They just slip over top of an existing red or blue bumper.

Sounds to me like a great opportunity to learn a life skill, then!

I second reversible bumpers, we have used them for several years and will NEVER go back!