California is going to districts!

Methodology: I used TBA’s district points calculations per team per event (which are calculated even for regional events) and counted the first two regionals per team. If a team attended only one regional, their first event score was doubled. I also added the rookie bonuses per the 2022 game manual.

I think there were 260 teams competing in California this year (or I missed some data and someone should lmk). District CMP invites vary by district, so it looks like there would be somewhere between 85 and 117 invites to a hypothetical CA state championship. For easy math, we can guess that roughly 100 teams (38%) would make it to the CA CMP, but this is made up, so don’t take it too seriously.

*I also note in the last column if the team is attending the FIRST Championship, though this data is not perfect as it relies on payment or registration and not on qualification. If someone reminds me, I can update this column a bit closer to the event.

971 at least should’ve just punched their ticket to champs

Two California DCMP events would make sense, I think, divided along geographic lines. 45 to 50 teams at each one. They’d be insanely competitive, probably like PNW this weekend. But don’t be like Michigan, Ontario, and Indiana, and hold them the week before Worlds.

Indiana had unofficial state championships in 2013 and 2014 before moving to districts in 2015. Maybe something to get the district ball rolling in Cali

I’m away from my computer but will look into this.

Yeah, this was the first thing that reminded me that it’s based on registration and not qualification. It’ll be easier for me to run this again in a week rather than one off correct them, unless someone has a complete dataset.

Checking the API, they are not getting awards points at Hueneme.

Unrelated, did they remove the district points page from regionals? i know it was there previous years, but its only an API call now…

That’s interesting though because the TBA page says they won autonomous award and that counts for award points in district.
I’m not aware of using the API though, I could be wrong 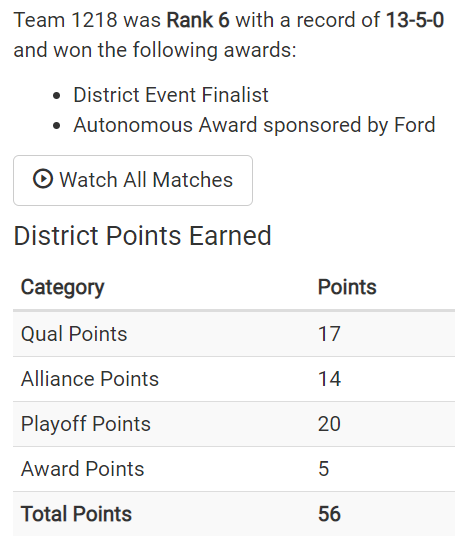 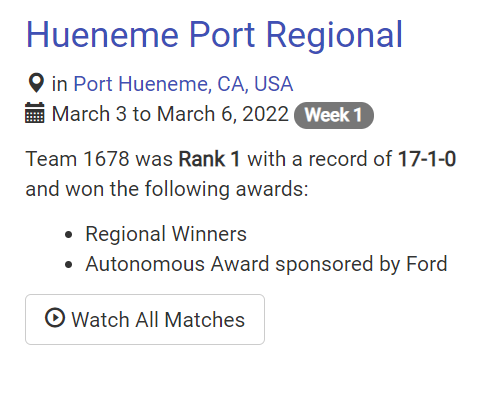 Just returned to my computer. I confirmed that I am pulling the correct events for 1678, but that the district point calculation for frc1678 @ 2022caph does not seem to include any award points.

@MikLast’s API response is the same one I get, so I’m working to get to the bottom of where the data is bad and will update when I learn more.

Any idea what a reasonable number of CMP invites would have been generated through CA DCMP?

Edit: For reference, there are currently 42 teams on the list in my OP attending the CMP, and we are likely missing a handful from week 6 events and others that may not be registered yet. So, a district system would likely qualify slightly fewer teams than now. A small amount of that is attributed to CA teams qualifying at non-CA events, and another part is just the general shenanigans that are wildcard qualification and regional vs. district criteria for advancement.

I’m working to get to the bottom of where the data is bad and will update when I learn more.

Okay – turns out there was an issue in the TBA calculation which I got @Zach_O restarted for me. Rankings have been updated in the original post. Feel free to let me know if you see any other issues!

I kind of love the idea of a massive CA champs event with 100 teams and 2+ districts, a la Worlds. It would be an exciting and inspiring experience for teams in such a competitive region where the average team has very slim chances of getting to Houston. Plus, crowning a CA champion with so many big-name attendees sounds like fun.

We played 2 events in Cali and would consider ourselves part of this hypothetical Cali district rankings. Where would we be? Just curious.

*I deleted my other post, since I was responding to the wrong person.

Should be 6th place by my napkin math

I think teams in Hawaii and Nevada should be able to elect into the California districts if they so desired.

This is actually a very interesting proposal. Wouldn’t want to force teams to travel, but for those that already do, could be a great option. I think we’d need to make it either fully opt in or fully opt out (e.g. a team from Hawaii competing at CA District events is a CA District team. Competing at another Regional like Hawaii on top of that and they should be treated like a visiting district team from a qualification perspective)