The purpose of this thread is to study the feasibility of three different shooting strategies and for each one to find the optimal, robust angle. The strategies are as follows:

For this purpose a simulation was written (see code below) and a real life cargo drop test conducted. The test of releasing the cargo ball from a height of 4.96 meters, showed that cd = 0.4 (drag coefficient). This was found using the simulation (theoretical ballistics model) constructed in MATLAB.

The simulation returns graphs showing the trajectory of the cargo from its release at a certain velocity (6 - 12 m/s). A few key parameters were taken into account, namely the height from which the ball is released (currently 1.1 meters), the height of the target (2.64 meters), and the maximum ceiling height available to the team (~4.8 meters). The simulation also took into account the angle at the upper hub height to filter shots which might bounce out (<50 degrees), they are marked as dotted lines. Additionally, the robustness of the shot was calculated based on the error in horizontal distance when the velocity or the angle are slightly changed.

The calculations were conducted for angles between 55 and 79 degrees.

The results for the 1st strategy:

For this strategy the best results were found for angles between 75 and 79 degrees (see graphs below). The deviation in velocity and angle do not make a huge impact on the horizontal distance of the cargo. The shots hit the upper hub at a large angle making it more likely for them to go in (we do not take into account a “swish” when the cargo only touches the very bottom of the target and has a chance of bouncing out).

The results for the 2nd strategy:

For this strategy the best results were found for angles between 63 and 67 degrees (see graphs below). The deviation in velocity made a more pronounced error in horizontal distance but the angles were still by far the most optimal. Although for really long distances (launchpad) the cargo ceiling height was exceeded and the shots were less accurate. Angles smaller low 60’s high 50’s are too prone to angle and velocity deviation and can not shoot to midrange distances accurately based on the <50 bounce criteria.

The results for the 3rd strategy:

From the graphs it is easy to understand that one angle can not be optimal for both strategies. Therefore our suggestion is to have two set angles between the ranges above that will optimally cover the greater part of the field (other than the launchpad area). 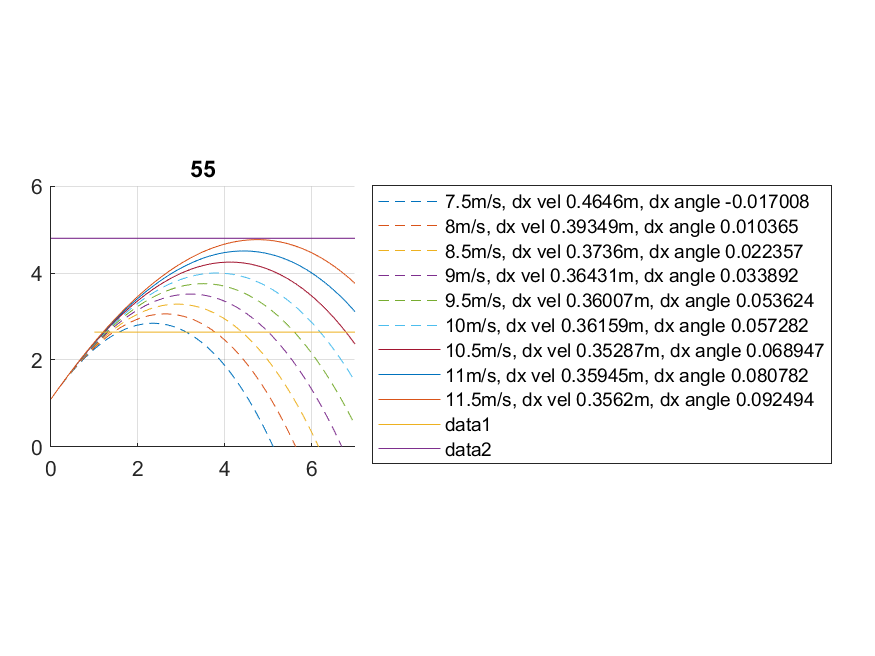 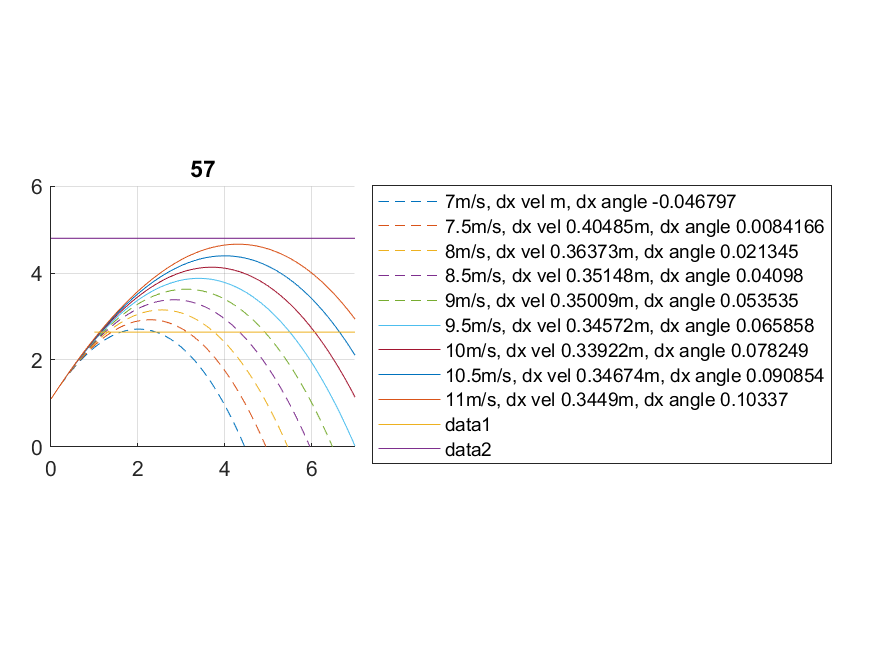 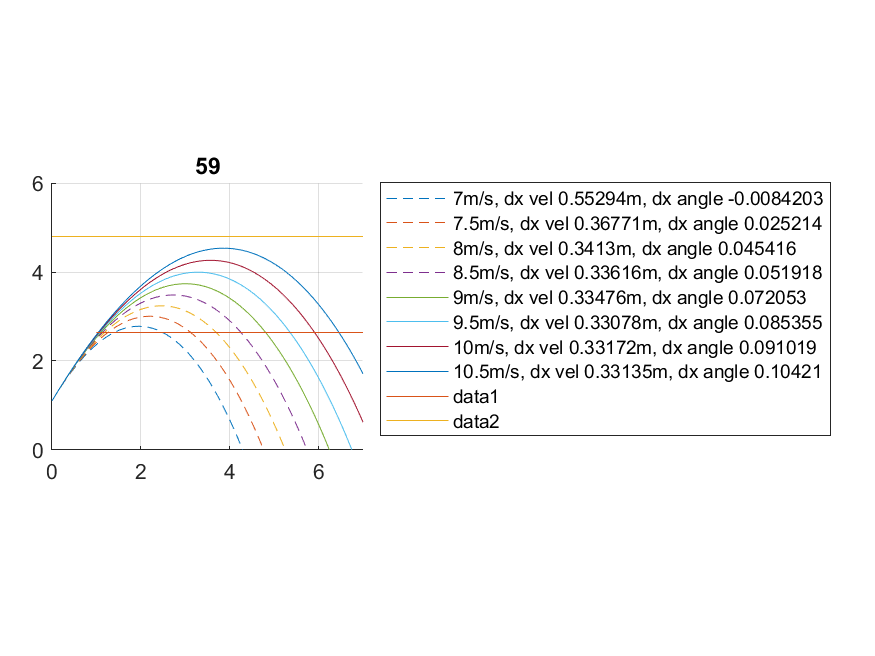 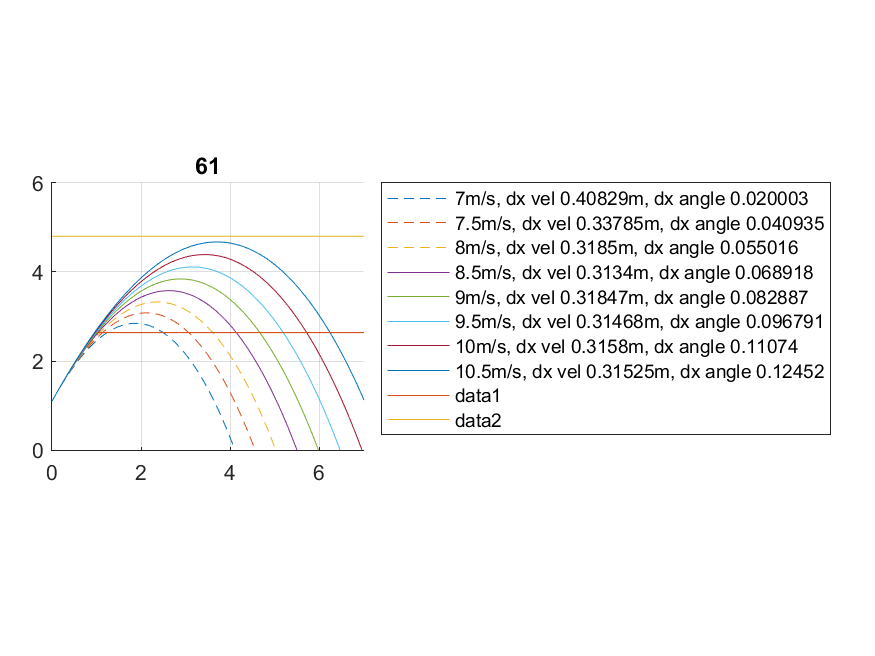 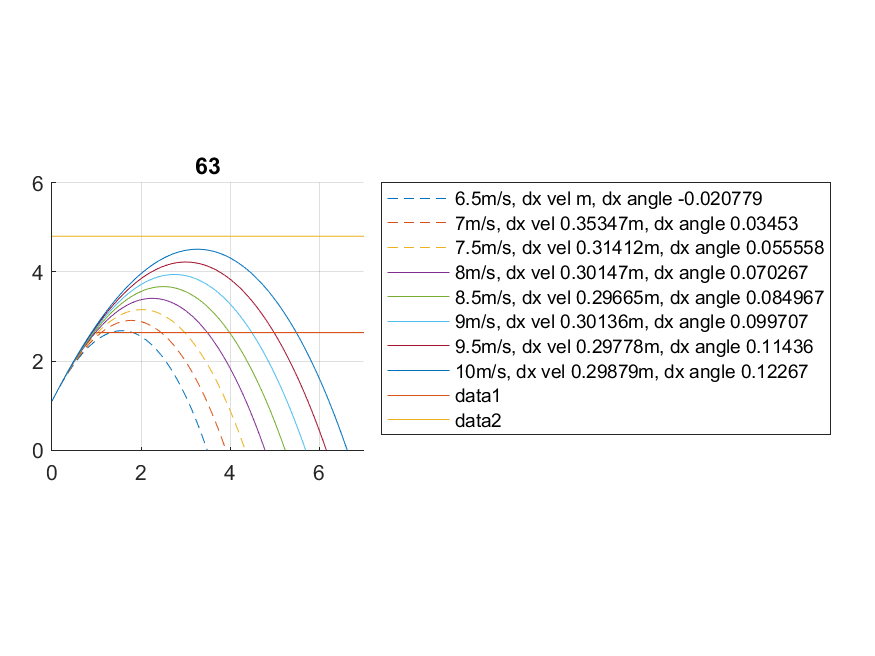 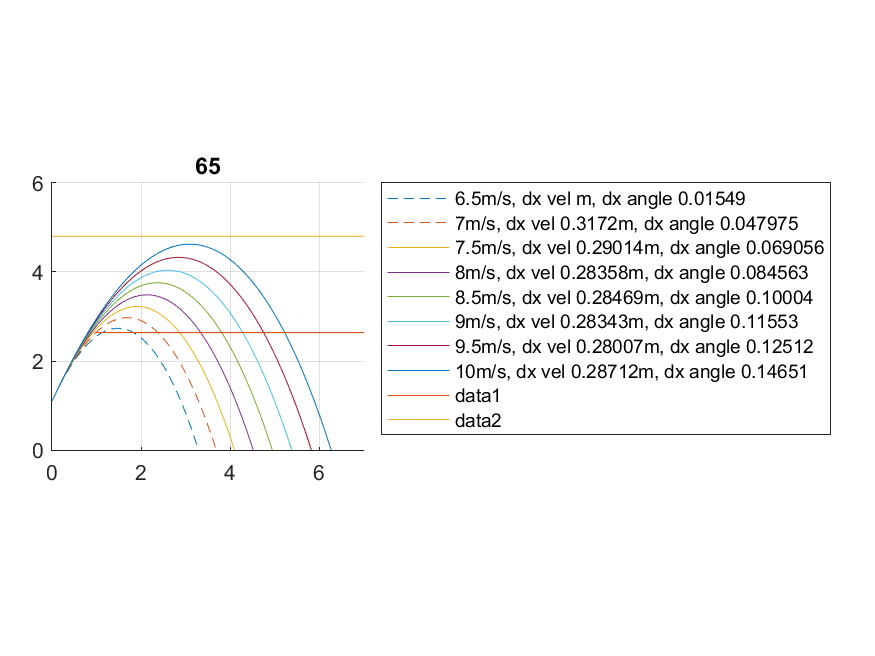 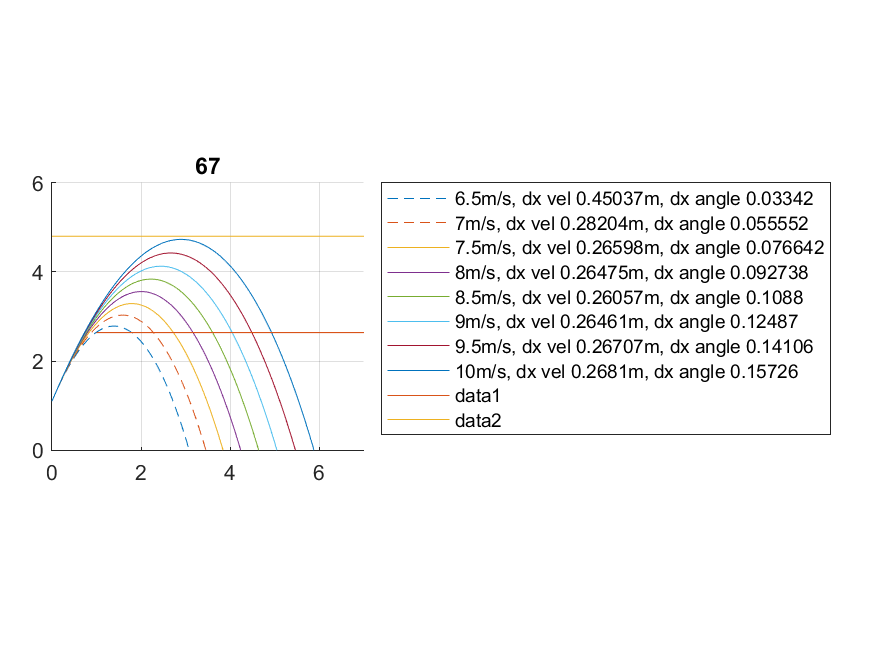 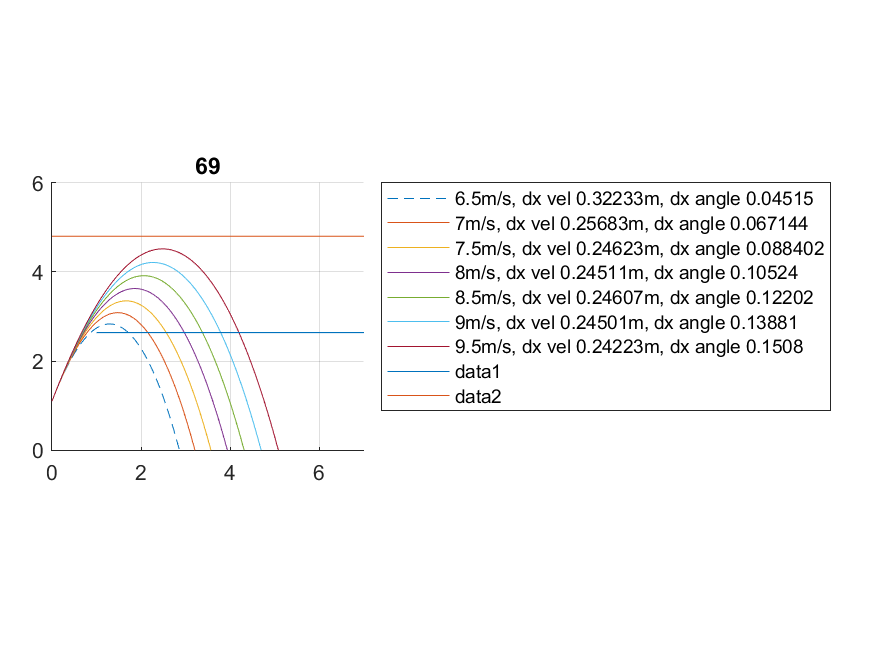 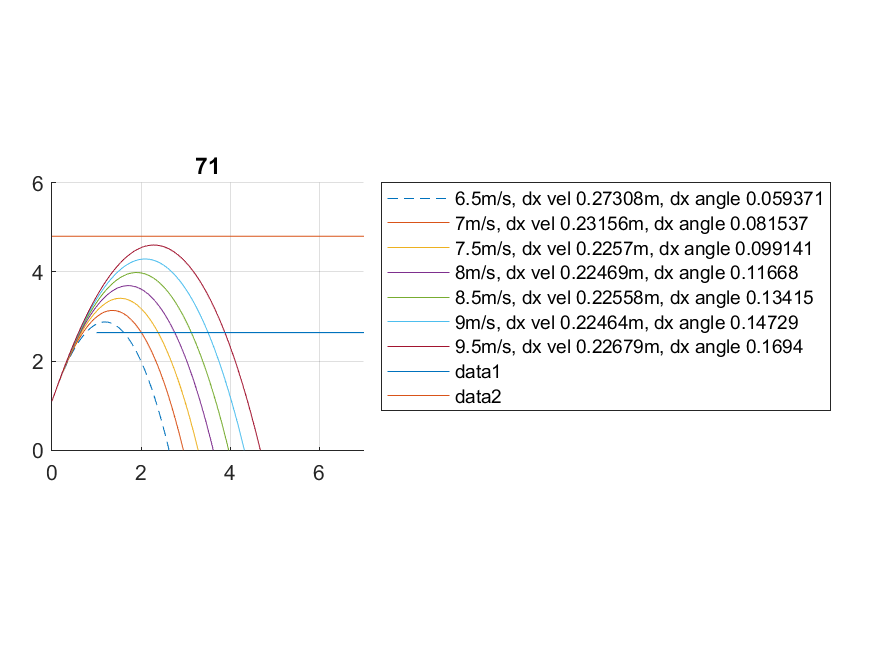 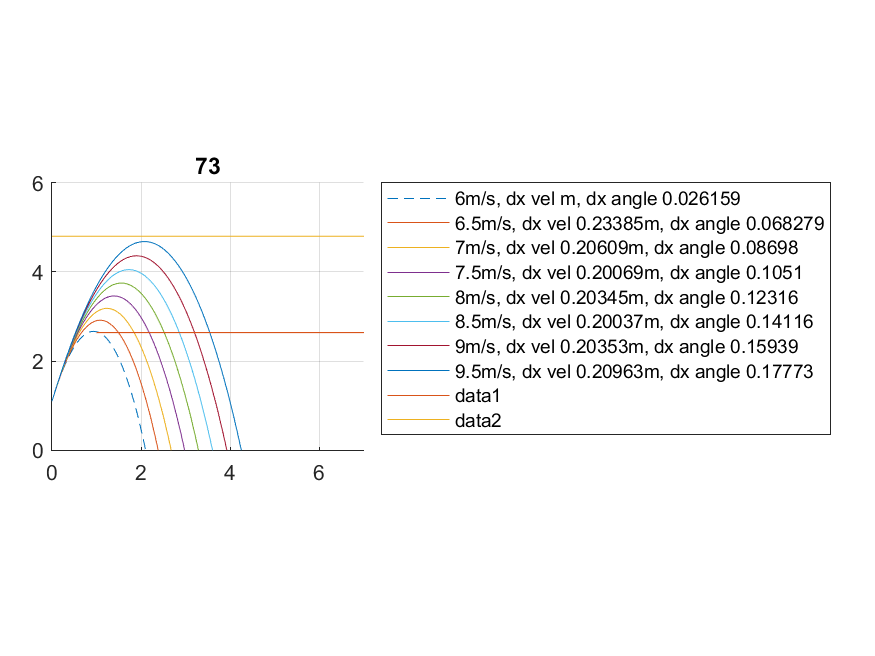 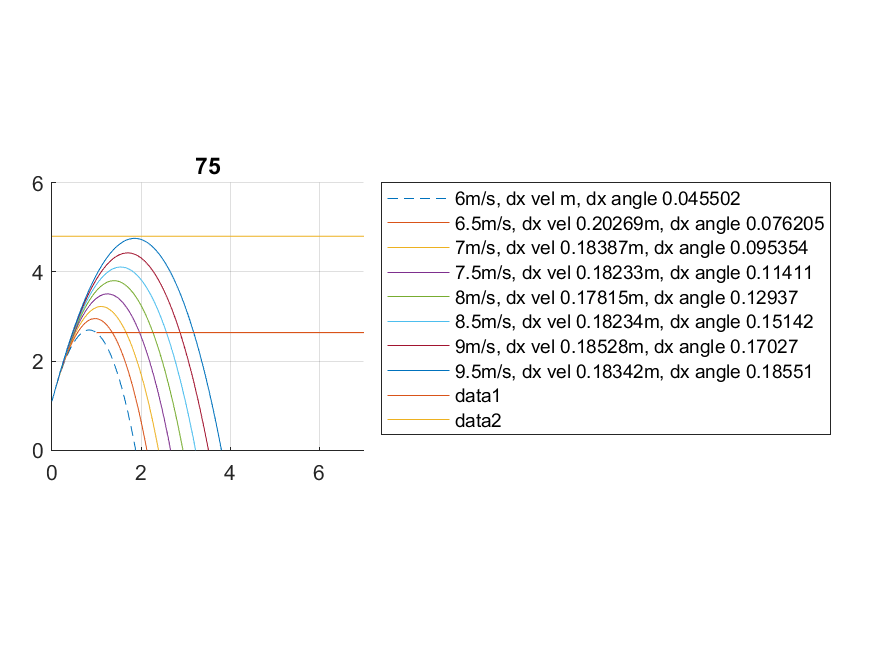 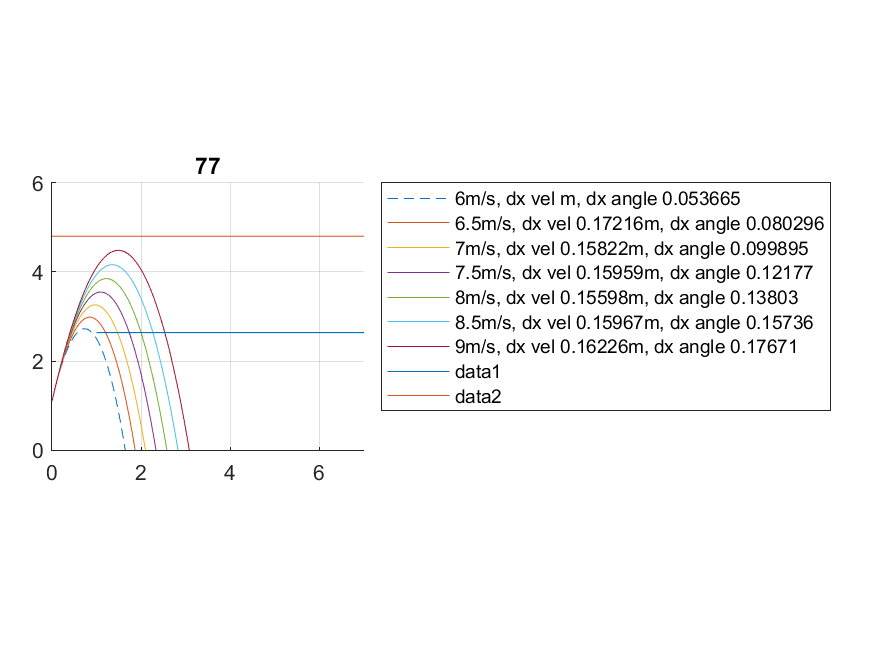 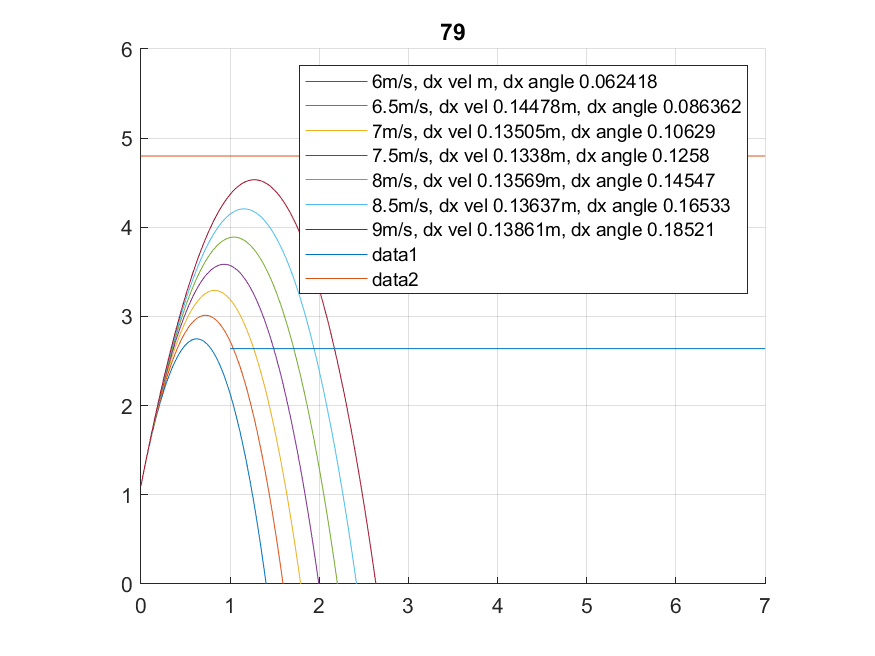