Welcome to the seventeenth straight year of the Chief Delphi Unofficial Caption Contest! (Yes, this predates 3v3 play, Facebook losing the “the”, and a bunch of other signifiers that I’m old as heck.)

After the season-ending contest last week, here are the scores:

Instead, I give you the rules. (Other rules have been created, but these are the ones that see use.)

The rules:
-I am never ever gonna be eligible, unless I change the rule just before handing over control of the game to someone else.
-If it’s your image I pick, you’re not eligible.
-If you suggest an image and I pick it, you’re not eligible.
-Entries will be scored by me on originality, or in the absence of that, dry humor.
-First place gets ten points, second gets five, honorable mentions will be awarded at my whims.

Normally, every entry gets an honorable mention worth two points because the old half-get-two-half-get-one format was a lot of work for basically zero difference. One particularly good zinger will receive the burn award and three points. Singles will be reserved for blatant copycat entries, things that cross “burn” into “okay chill dude”, or the truly incomprehensible. And don’t make me award a zero. (I think that’s happened once in 13 full years.)

There have been some updates to the rules over the years:

Preventing anyone from entering the caption contest by means of any feat of engineering is prohibited. This rule shall not apply if both the victim and Billfred are laughing after the act has been committed.

"The Billfred Is Working Way Too Much Rule (enacted Caption Contest #24)":

If, for whatever reason, Billfred is working on a job on a day he has to post or judge a caption contest, he reserves the right to fudge the posting or judging by one day in either direction.

(“Working” gets a rather liberal interpretation, mind you.)

No person may kidnap, threaten, or otherwise cause harm or mental distress to Billfred in order to influence the outcome of a caption contest.

Anyone except Billfred can enter the caption contest, even if it’s their picture.

Since then, the only thing that’s changed is the deadline: Sunday at midnight Eastern, though entries posted afterward will count if they’re posted before I open the thread to score it.

[164371a0b70bc837ccf5ecd7e4f1c6d2_l.jpg] During the talent show, a kid from 393 came up and gave his talent of handling a whip. It got pretty crazy up there and scared the first few rows of people and the judges, forcing them to turn the table and hide behind it for their protection (it was a safe act, I think…but I was too busy hiding in the 2nd row of seats).

Indiana Jones’s final adventure: Attending an FRC competition armed with only a whip and no ear protection, even though several teams suggested the cafeteria fish as earplugs.
Legend has it Indiana Jones is still fighting his way past several angry DJ’s after he tore the speakers in half with his whip.

The GDC responds to @marshall asking what the point of the BOM is.

Here we are, behind the battle lines of the epic battle between Andy Baker and Billfred.

Early interpretations of “social distancing for FRC” failed to create a viable plan.

Who made the judges grade nine’s? Veteran members would be at least standing up at an appropriate distance and still doing there job.

The Gong Show early years. Chuck Barris (looks a lot like Dave Laverly) is on the left. One of their first improvements for the show was to buy chairs for the panel of judges.

What everyone who has seen battlebots envisions when you tell them you’re in robotics.

In line with the FIRST requirements for safety glasses in the pits, IRI experimented with safety tables at the talent show. Spoiler Alert: It didn’t catch on.

Needless to say, Battle Bots decided to go with a different method of crowd safety after the protective table incident in FRC back in '06.

Early experimentation of 2015 can grabbers.

The robot went a little rogue after some auto testing… 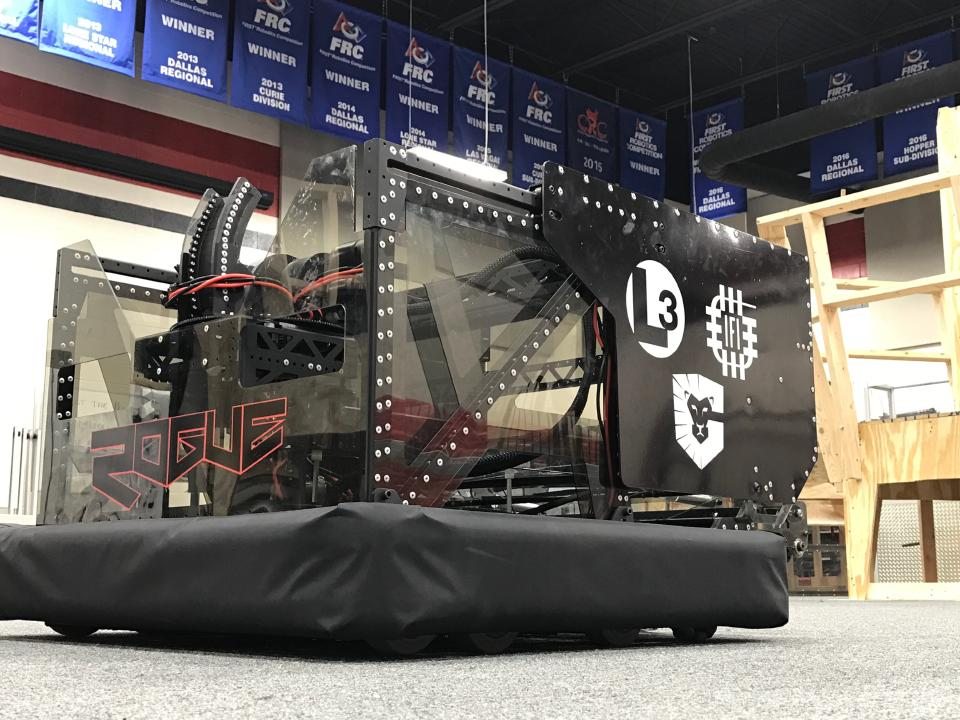 #AllBlackEverything (I hope they approve)

What happens when you take the students at their word when they say everything has been tested thoroughly.

To build fan hype for Boston Dynamics new robot, Spot, they agreed to do a number of community events, including one at Pike Place Market!

I just made the new spreadsheet, let’s go!

The GDC responds to @marshall asking what the point of the BOM is.

And the burn award goes to:

What happens when you take the students at their word when they say everything has been tested thoroughly.

Which means the scores are: