The following message was sent to attending teams today.

The rule changes for CC2022 have been posted (link). Please share with your teams and let us know if you have any questions or concerns.

As a reminder, please reach out to us via email if you are shipping your robot to Chezy Champs (not bringing it yourself).

Looking forward to seeing everybody in San Jose next month!

Note for other users of Cheesy Arena: All our rule changes will show up in the public release of Cheesy Arena and it’ll be possible to enable or disable them via the settings.

With CC5, is there a bracket reset if the alliance from the loser’s bracket wins the (first) series in grand finals? If so, is it a second best of 3 round?

Will teams knocked down to lower bracket stay within their respective traditional inner/outer brackets up until Lower Finals, or will there be any crossing of the lower bracket to match inner/outer alliances against one another earlier on? 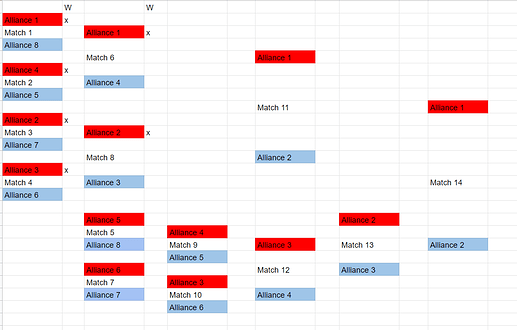 This is my take on how the double elimination bracket should work.
This attempts to

Is there any reason for going towards a double elimination bracket instead of the round robin? (other than the whole 6 alliances vs. 8 thing)

Round robins result in problematic scenarios which can honestly be best explained by looking at Einstein match 14 of this year, 1678s alliance could’ve won the match but lost because in order to be able to make finals they had to get 40 points on their climb have 4414s alliance NOT get full climb points and hope that 2910s alliance didn’t win their last match with full climb points, and as a result of this they lost the match when 1706 accidentally gave away free climbs trying to stop 4414s alliance from hanging, as a result of this tiebreaker incentive 4414 won the match to become 4-1 and make finals whereas if 1678 had played the match only to win 2910 would’ve made finals because of their higher average hang points. Double elimination is better became it is a format that gives teams a more even playing field like a round robin, but without the weird format where some matches don’t matter Amdahl teams that have already missed finals can choose who else gets to go

Made some improvements (in my opinion) and added some ideas from @Nate_Laverdure about the turn time for matches and when teams can be queued for each match. 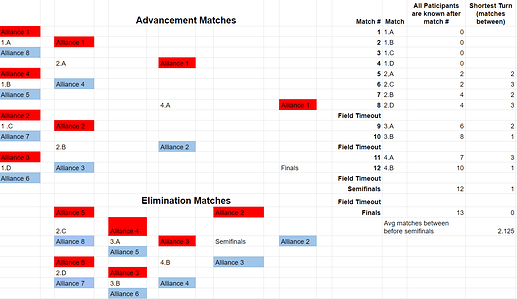 This setup does have more bumper changes than the traditional bracket. Here is an approximate list of the bumper changes (yellow matches wouldn’t exist if you lose to a higher-seeded alliance).

The double elimination format gives tournaments true 3rd and 4th place alliances and ties for 5/6th and then 7/8th alliances as well. Instead of just Semifinalists and Quarterfinalists like the traditional tournament.

My primary concern with the new elimination bracket is how yellow and red cards are balanced around standard Bo3 elimination brackets. In the standard Bo3 format, there is no opportunity to abuse YC violations to advance through a particular stage of the bracket – e.g. an alliance can “cheese” a single win through strategic rule violations that result in a YC but can’t use that strategy twice in a single Bo3 to eliminate an opposing alliance without triggering a RC escalation and loss of match.

Probably the best example of this is a violation of G403, where a defensive robot intakes and controls 3 opponent cargo for the duration of the match. This rule is easy to accidentally violate (making intent hard to evaluate) and heavily impacts the match by substantially reducing the scoring ability of the opposing alliance.

I think an addendum “YC violations deemed consequential to the outcome of the match will be escalated to RC during eliminations” fixes G403 cheese strategies, but might cause issues elsewhere in the rules.

H201 exists which allows egregious violation of any rule to escalate to red cards. Possessing 3 opponent cargo for the entire match would almost certainly result in a red card along with enough fouls to lose the match if not for the red.

I disagree with your conclusion from multiple angles:

With Chezy doing a best of 1 I actually disagree with it being a more even playing field. Imagine you are alliance 4/5 this is always expected to be closest match up in the first round, and unfortunately you lose the first match by 1 point. You now have to win 4 matches in a row to hope to make finals basically requiring you to play perfectly every match.

If the same match happens in a traditional best of 3 you have a chance to edit your strategy since you are facing the same opponent and potentially edit an auto or fix someone’s failed climb and win 2 in a row. You are now “reset” and can afford to lose another match and not completely lose the tournament since you are in a new best of 3.

To be clear I am glad they are experimenting with the tournament structure and I wish more events would try other things to see if something is better. However this structure makes me worried with best of 1’s since it results in 15-16 matches while the traditional structure results in 14-21 matches. My worry is that for the interest of ending events “on time” this structure could be adopted for official events. I worry best of 1’s will result in teams getting into the “lower” bracket due to an unfortunate disconnect or someone pulling a “cheese” strategy that would not work in a best of 3 but does work in a 1 off.

I do wish it was 2 out of 3 double elimination however having 28-42 elims matches is a little much. If there was a way to do double elims in the “upper” bracket and finals while single elimination in the lower would result in 22-30 matches which is a little more reasonable but still a lot.

Made some improvements (in my opinion) and added some ideas from @Nate_Laverdure about the turn time for matches and when teams can be queued for each match.

Going into a little more detail…

We compared these 4 unique ways to order the 12 matches prior to the “semifinals”:

(These names for the 4 schemes were randomly generated.)

The plumbing of the tournament (e.g. the winner from match X goes into the Red slot of match Y) was kept constant through the analysis: 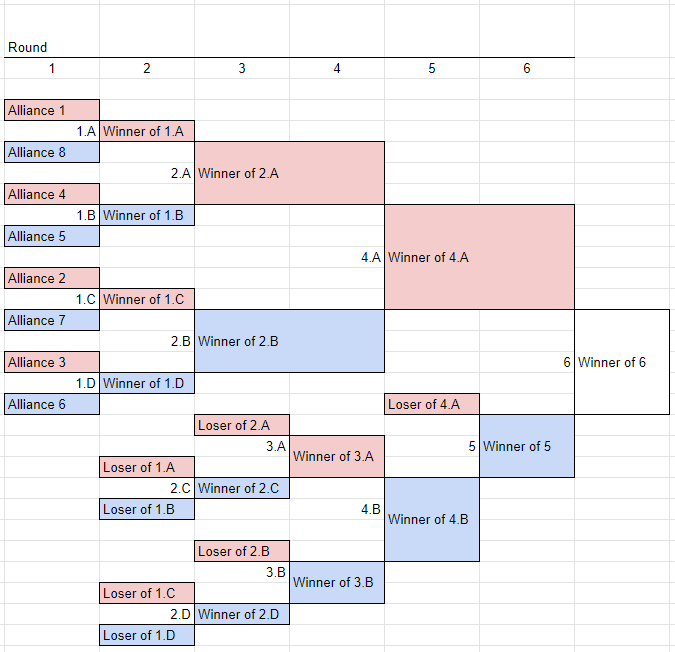 Kudos to the CC team for trying something new for the event. Double elimination should be interesting. I like the idea of clawing your way to the final through a series of new opponents.

The competition level at CC should be pretty high. Going off of the winning margin at champs playoff rounds (~25 points), and assuming CC playoffs will be similar quality, I personally think there won’t be too many double upsets spoiling an alliance’s chance at the finals.

Double elimination is a hard and ugly bracket to understand as a student, mentor, volunteer and spectator (I have experienced it from each perspective). The offseason my team hosts used to use it for many years until we switched to round robin in 2019.

It’s a cool concept and I genuinely hope it works out well for you guys.

Hopefully the TBA crew will add the double elim bracket now that a more prestigious event is using the bracket.

Glad you chose Double Elimination, we considered it for the Israel International Offseason and ultimately went with 6 alliances round robin, 4 teams in each alliance.

Would be interesting to track both events and see how each of the playoffs methods will play out.

Excited to see a double elimination bracket in action

Double elimination is widely used in the US for youth and college baseball tournaments. It’s pretty simple–lose twice and you’re out. Winners play winners of matches and losers play losers until the final round.

I’ll echo Connor since we’ve both competed at a few offseasons locally in NE that have used Double Elimination brackets in the past. It is very confusing and when combined with the fast pace of FRC playoffs, strategy, robot repair, etc. it gets confusing to keep up with.

That being said, I have a lot of faith in the Chezy Champs organizers and volunteers to fulfill things on the broadcast side to keep the stream and event updating with some good graphics documenting the tournament.

Yes, it can be confusing in the moment–you have to know what happened with the teams in the previous round, and it’s not clear who the teams might play next. It’s best to keep the announcing “in the moment” by the announcer rather than trying to explain what is ahead because by its nature the bracket is more uncertain than the standard pyramid. Just focus on who’s eliminated with a loss in this particular match, or if it’s just a drop into the losers bracket.

Hopefully the TBA crew will add the double elim bracket now that a more prestigious event is using the bracket.

TBA has actually supported an 8-alliance double-elimination bracket for some time. Here’s a 2017 event that used it: Where is Wolcott Invitational (2017) - The Blue Alliance

(Now, rendering a bracket is trickier, but there is at least back-end support for the match structure)