FUN Fantasy Drafts are back with Chezy Champs 2019! Come see what your favorite teams go for in this random auction draft and “critique” the live draft with their awesome or questionable budgeting decisions! The live drafts purpose is to set the prices for the Pick’em draft and to provide some live entertainment. Each fantasy team will receive $200 to select as many teams as they can.

This will be broadcasted live at twitch.tv/firstupdatesnow from 8:30pm ET - 9:45pm ET. Here’s last years Chezy Champs live draft for reference of how these go.

Results will be updated live and located at https://arimb.github.io/PickemLeagueLive/

About to start the Chezy Champs Live Auction Draft. Come join us live to see what the teams go for and to ‘critique’ the live draft teams! https://www.twitch.tv/firstupdatesnow

Thanks for hosting Tyler! It was a lot of fun.

Here’s a list of how similarly everyone picked to me:
Me
Hokie Bros
PNW Power
YUUUP!
The Dream Team
Layth is Studying
Instant Regret
BRIAN GRIFFINS

Additionally, here’s a graph of how much value each pick was according to my system (I modified the last 3 picks to be the full amount of the bidding team’s remaining money): 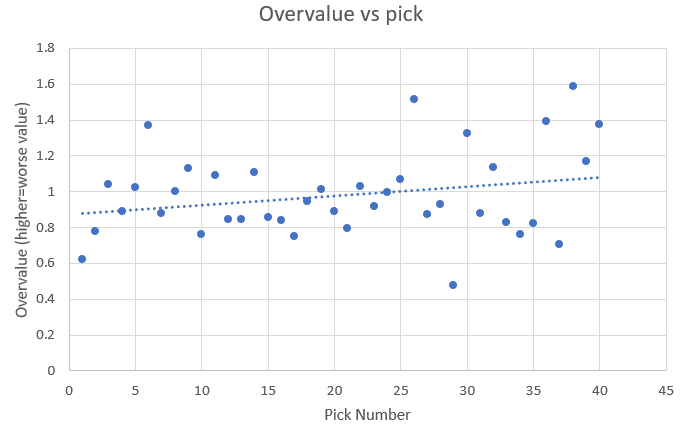 We all generally should have bid more early on in the draft, I didn’t draft my first team until pick 17, so I could have done much better on that front. Pick 29 was team 2557, who I unfortunately missed out on because I had just drafted 114 and was updating my notes.

Could you post the order team’s were auctioned. I would like to see who you thought the most under and over valued teams were, but I can’t seem to find this information.

Sure, here you go

Thank you everyone who tuned in and to the teams who participated in the live draft.

The Pick’Em for Chezy Champs is now open at https://tinyurl.com/funcc2019 through Thursday 5pm eastern. The winner will receive an Amazon Gift Card

You can view scores live once the event starts at https://arimb.github.io/PickemLeagueLive/ Note that when you submit your picks it takes a few minutes to display. During the event it should update as shortly after each match is posted.

Good luck and thanks to @AriMB for creating the draft website!

Archive is on YouTube if you want to watch: https://youtu.be/Ap-BtzF_-WI

How did you determine the value of each team? Any other factors besides elo?

The main inputs were Elo and the predicted rankings from my event simulator. I also found the minimum value for a team and added a non-linear adjustment to make better teams worth more.

Everything was empirically determined based on the IRI draft and results from earlier this year. There are some differences between the events (notably, team count) that I tried to correct for, but we’ll see how good of a job I did.

Congrats to the winning teams!

Any feedback is appreciated. According to @AriMB here are a couple bugs that were fixed: