Besides , can you introduce your auto? How do you accomplish such an amazing autonomous project? And how do you draw your trajectory?
Thanks for replying!

Slid out the back, CAD is missing the cutout in the bumpers.

Thanks for all the questions y’all, keep them coming! The students will be getting to y’all shortly

Thank you for releasing this information. I learned a lot, and had a lot of fun, looking through all of the CAD. I really appreciate your willingness to share your designs. After looking through the CAD for the 2020 and 2021 robots I had some questions:

One question, who was your vendor for the rough top tiny tank treads?

Lead time was 4 weeks. FN Sheppard is great! We also use them for the belts on our cleaning robots at my old work.

Just curious, is there a way to see the part studios/sketches? Was looking forward to looking at the master sketches/design process.

Thanks for the release! 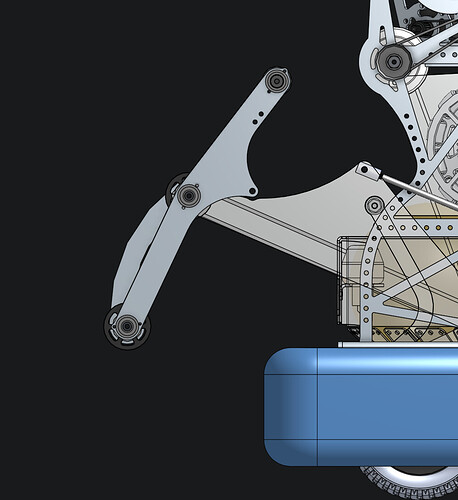 The intake actuation is really interesting to me. It looks like you’re only powering the intake deployment, but there’s nothing constraining the rotation of the roller plates (?). This seems like it would help if you drive into a wall or something, but how do you keep the rollers in a position where you can intake balls? Does it just tend towards the extended position by gravity or angular momentum of the rollers?

l see that you use feedforward in your swerve. How do you use the characterization tool to calculate the ks , kv , ka with a swerve drive. Can you explain the main steps ?

Iirc in real life there were some cords between the top of the intake arms and the superstructure. Similar to 973’s cords, I think?

What was your range of motion? Does the ma3 cover the whole travel, or just a small expected starting zone?

Great question, here is an answer from our 10th grade design student Brendan, who designed the turret, but doesn’t have a CD account

Surgical tubing, ziptied through the two holes below the top roller. 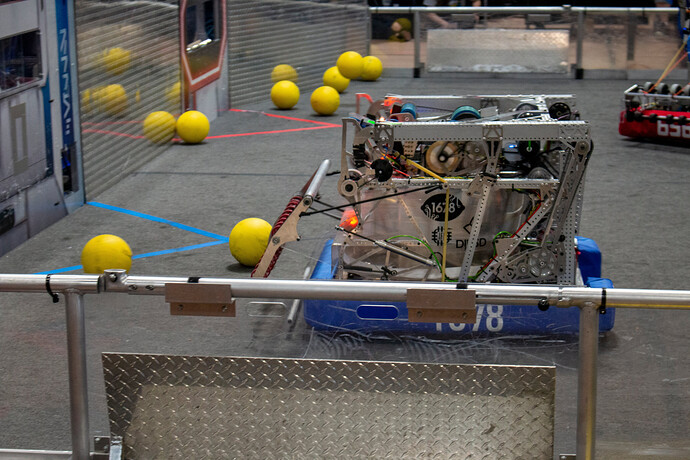 Really like your bash guards on your swerves wheels. How did you like them and how did you make them?

Great question! Design and software tasks for each of the robots are all delegated to groups per each robot, with some intermediate guidance from more experienced subteam members who are involved with the development process for multiple robots.

From a software perspective, separate groups are defined for subsystem code writing and bring-up, whereas the writing process for areas like vision tracking and superstructure for interdependent subsystems are guided by more experienced members. Usually, a veteran member leads the writing / bring-up process to properly delegate remaining tasks by skill level and priority.

On the design end, the process varied slightly for each of these robots, depending on how many were being put together simultaneously. Both our 2020 competition robot and our mk2 robot were created by splitting up veteran members to each lead the design of a single mechanism, meanwhile, new members were given the opportunity to work on smaller complex parts and systems such as 3D-printed electronics mounts, large pieces of bent sheet metal/polycarb, or even a system such as the control panel mechanism in 2020. The essence of this process has remained fairly consistent through our following projects, though we did split up our subteam into two groups for both the 2021 build season and offseason robots we made, which each underwent a similar process as described above to divide up work among group members.
As for the process of designing the 2910 and 4414 clones in the 2021 offseason, we took direct inspiration from 2910’s CAD release when redesigning many aspects of their robot, while the 4414 clone design team worked primarily off of videos and images of their robot for the redesign, since 4414’s CAD had not been made publicly available. Nonetheless, both robots still underwent a complete redesign.

Throughout the process of creating these six robots, we’ve found how vital clear and constant communication is, not only within subteams but between them. By keeping all communication transparent in our subteam Slack channels and “robot status” channel, mentors and veteran members can contribute across groups with questions/comments/concerns to provide further guidance along the way, and group leads can check-in with questions for mentors or leads from other subteams working on the same robot.

Please let us know if you have any other questions!

We printed all the wheel guards on our Markforged printers. We went through a couple iterations of the design on these after encountering some issues that we ended up fixing leading up to MTTD. The first image is our previous version (which we took to Chezy), second is the final (which we took to MadTown).

The first issue we found was that the hole clearance on the first iteration was too tight to remove the wheels, which made it tedious to replace tread when it wore out. There were also a few other issues we found when we started driving. The cone-shaped chamfer often broke when driving over the steel bars at the rendezvous point, and the bolts we used to mount these to the drivetrain rails were previously the same bolts that held the modules on, so when the guards would break it meant the modules weren’t strongly constrained to the rails.

For our final version, we increased the diameter of the hole for wheel removal, and we made some of the mounting holes large enough to fully clear a socket-head bolt. This made it so that we could have four bolts mounting the module directly to the frame and another four mounting the guard to the frame, so that if the guard broke it wouldn’t impact the integrity of the module. Finally, we changed the shape of the chamfer from a cone to the pyramid shape (below) so that we could add some 1/4"-20 flat-heads in to hold the layers together. All of these changes helped us get through MadTown with no broken wheel guards. 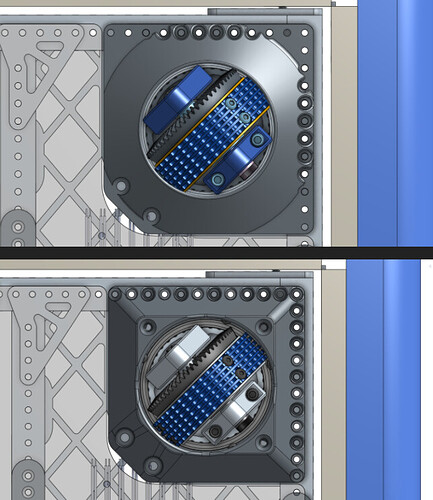 Thanks for sharing all of this really appreciate it. I really like your idea of putting bolt all the way through. Really makes it a lot stronger. Did you fell like it helped protect the swerve drive. Also where they 100% infill or what settings did you use for the markforge

Having the bolts all the way through definitely helped keep all of the layers together, preventing the modules from getting damaged. The previous versions left the modules more vulnerable since the bottom layers of them tended to rip off when we hit the rendezvous bars. As for what settings we used, we were able to get away with the default 37% infill and didn’t need to use reinforcement material or adjust any other markforged settings. Every guard was printed at either 0.1mm or 0.125mm layer height depending on when we needed them completed.

That is really good to know. We just got a markforge to trying to figure out what settings to use for parts that will see impacts. Thanks for sharing

Thank you for your questions!

In 2020 we tried the normal regular bellypan, but it led to major issues for wiring,

like replacing a PDP wedged half under the indexer at LAN 2020. Big fun. 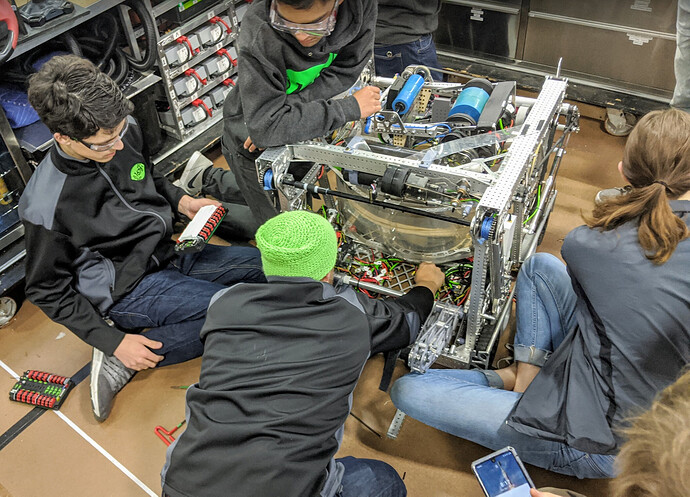 I physically winced being reminded of this moment haha. Big (not) fun!

What was the logic behind having an 8 falcon drive on your 2021 bot - is the robot not traction limited already with 2 falcons?