Clarification about the extensions beyond the frame perimeter

Can we extend a part of our robot on one side and extend another part on another side at the same time if they’re both abiding by the 30 inch limit?

This is not official, but from our understanding is yes the 30 inch is a perimeter around the robot frame.

Yes. One tip is to read the rules EXACTLY as they are written. Do not assume anything. If something is not explicitly forbidden, or limited in some way, it is allowed. Restrictions are stated. Where it gets a bit tricky, is realizing that some rules are dependant. For example, for height you have to consider R3, (STARTING CONFIG height), plus G12 (height restriction inside HAB ZONE). The end result is once the game starts, outside of the HAB ZONE, there are no height restrictions (no even a caution to consider the practical height of playing field… though that would be a good idea to consider). However you better have a way to stay rule compliant inside of the HAB ZONE.

The other key thing to remember is that while you can look to previous year’s rules to set expectations on how things are specified, previous years rules do not count. Rules changes year to year and only the rules in this year’s manual matter. Do not assume things are the same!

You could build a ROBOT that opens up like an umbrella, to 30" outside the FRAME PERIMETER all the way around, and be compliant.

Does the 30 inch rule apply to under the robot in the hab zone. For example if you had pneumatics that pushed directly down to get you on top of the level 3 but it’s larger than 30 inches for whatever reason, would that be breaking the rules? Or does under the robot not apply?

The frame is a vertical space from the floor to space so no, 30" doesn’t apply here. 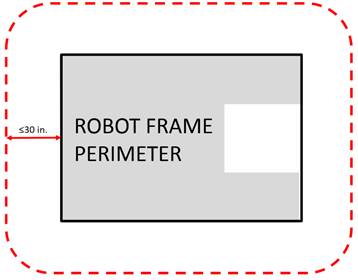 See the Game Rules: ROBOTS section for height and extension restrictions for various areas of the FIELD.

The only rule I found regarding height in the HAB zone refers to:
G12. Duck in the HAB ZONES. A ROBOT with its BUMPERS fully in either HAB ZONE may not extend above the ALLIANCE STATION WALL, i.e. more than 6 ft. 6 in. (~198 cm) above the carpet.

According to what I can understand from the rules, Yes.

You could build a ROBOT that opens up like an umbrella, to 30" outside the FRAME PERIMETER

i’d love to see an umbrella that looks like that

That would be one T H I C C umbrella.

It would also have to conform to R9a. but is doable.

Can we extend a part of our robot on one side and extend another part on another side at the same time if they’re both abiding by the 30 inch limit?

yes. Your robot will not pass inspection and you will not be allowed to play.

we would have time to fix it right?

I wouldn’t know that. That depends on when your team meets. You can sit in the pit at your competition and fix it then if you’d like but if you want to compete you need to fix that problem before then.

how could we go about doing that