Clean your Wheels, Check your Balls!

For the first ~2 hours of practice on Saturday, the ball path on our robot was pretty awesome. Never had any major jams and things just worked. Later on in the day, things started slipping, and the ball got stuck a lot more frequently in places where we never had issues earlier.

A large contributing factor in these failures was a of buildup of fuzz on the wheels. Pretty much anywhere that the wheels slip on the balls we had a ton of fuzz buildup. It was less of an issue in places where the wheels didn’t slip.

One of the things we tried after seeing these failures was a 2" mecanum wheel. We had limited success, so we quickly tossed out the idea for our specific geometry… but then noticed how quickly/badly the balls were marked up… I’d like to think intakes that make the type of markings below will not be allowed. The marking happened almost instantaneously, and I have to imagine we’re not the only ones doing it. Check your balls to make sure there aren’t any signs of damage! 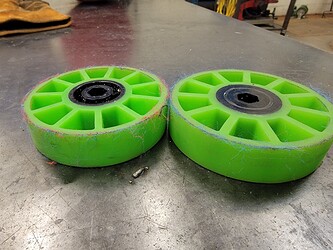 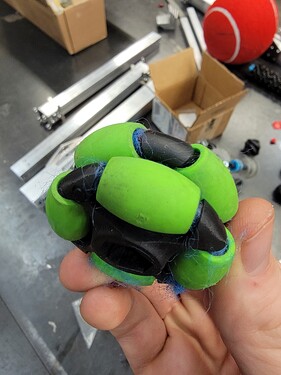 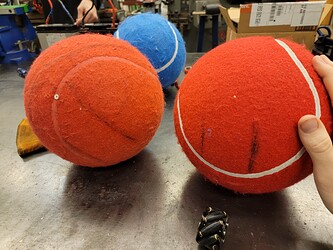 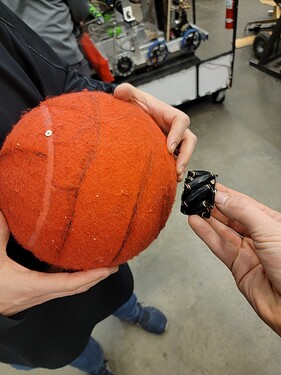 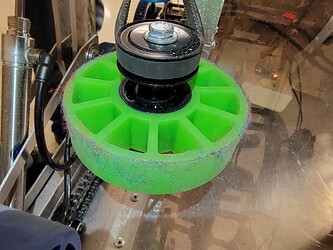 There’s also a strong inverse correlation between wheel hardness and this type of wear. Softer wheels (in our observations below 50A) tend to grab fuzz much faster than harder wheels. 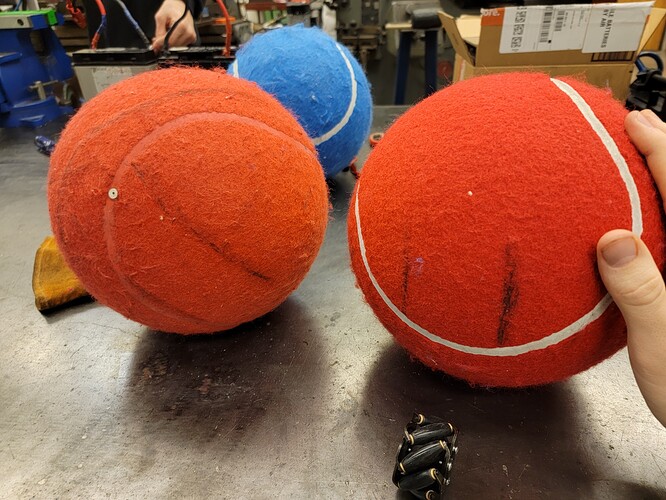 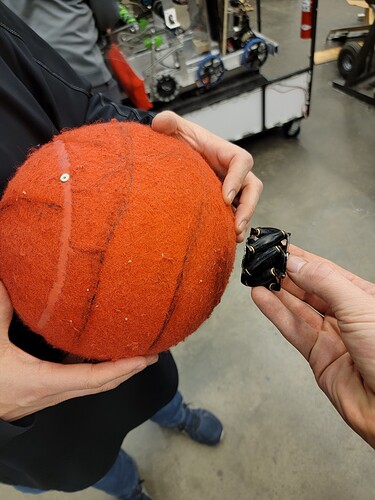 what the heck are you doing to those poor balls

Literally just intaking them on carpet… I was really surprised to see how quickly they got marked up.

What wheels are those? I recently tested some 3D printed mechanums and had no issues. Though I wasn’t very aggressive in my testing. I’d be interested to know what material the rollers are made out of. I’d like to avoid damaging the game piece as much as possible.

These mecanum’s definitely have rubber rollers. I couldn’t imagine generating those marks on the ball with plastic rollers. I can’t find video proof of these wheels being the cause of these marks so it’s only an assumption at this point. I wouldn’t take this to mean that all 2" mecanum wheels with rubber rollers won’t work… they just won’t work in the configuration we had them in!

We learned to check wheels constantly in 2016.

Our original shooter wheel in 2016 was a Colson and we originally thought that having to adjust the shot over the course of the event was because of the balls becoming less rigid. One day when we were testing in the shop it was discovered that the balls were leaving a residue on the shooter wheel causing it to become much slicker. One quick turning on of the shooter wheel and some sand paper application and it was like new, except now we were shooting much harder due to all the adjustments made previously. The switch to a fairlane shooter wheel solved this later in the season.

We are a little more confident this year based on testing but after seeing this we are adding “ask when was the last time they checked their wheels for fuzz” back to the questions we ask before matches.

We’re using green compliant for intake and there’s been some “tufting” on the cheap amazon cargo, but not much on the KoP. Using colsons for launcher have seen a blizzard of orange and yellow fibers in the air after running amazon balls through. Again not much change to KoP. Perhaps we have lower compression that others, about 1in.

It doesn’t seem to be the rollers - in my estimation it is the plates rubbing against the game piece. We will try more this week.