Climbing and G18: A Warning

While talking to/working with other teams and/or reading stuff online, I’ve come across quite a few teams who don’t realize that (per G18) when you’re climbing you can’t extend more than 12" outside your frame perimeter, and that the penalty is a RED CARD when doing so to achieve a climb–the 12" extension rotates with your robot, so if you’re climbing with, say, a winch, and your robot pivots on the winch so that your bumpers tilt toward the vertical, you may be in big trouble.

I know, I know, it’s explicitly in the rules and called out in a blue box as an egregious penalty, but somehow a bunch of people are missing it…and I don’t want you to be those people. So either build a climber that’s robust enough that your robot doesn’t rotate with respect to it, or keep that flexible/floppy/winchy climber at or very very near your CG.

Yeah, part of our pre match checklist this year will be making sure our alliance partners don’t have a climb like that. If they do, they will be told not to climb.

Oddly enough, I think the climb would still count for the alliance (in quals), but the red carded team would of course get no RPs or tiebreaker points for their efforts… In elims, of course, it would be Very Bad Indeed™.

Points or no points, a red card on your alliance looks bad, regardless of if it is applied to your team. Although, that loophole is being added to my Q&A list for when I get around to pasting them all into the system.

Do you have a diagram that explains this. I am having a hard time visualizing the change when the bumpers shift.

The diagram is literally in the blue box under rule G18.

Are you saying if the rope/hook used during climbing extends >12" outside the perimeter due to the robot rotating?
Sorry for my confusion. It’s early here.

you can’t extend more than 12" outside your frame perimeter

12” is the limit, I think adding the above helps with comprehension.

Essentially, if you send a strap up to the bar and winch it in from the front of your frame perimeter, the robot rotates as you climb. After rotation, but before finishing the climb, the plane of the bumpers is vertical, and the strap is extending along that plane more than 12”. That also applies during rotation, as the projection of the strap to the plane of the bumpers goes from being inside the frame perimeter, to outside, to more than 12”.

12” is the limit, I think adding the above helps with comprehension.

Good fix, thank you – I edited the original post. 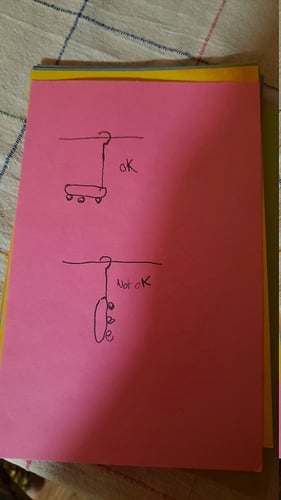 I need this on stickers for while scouting robots.

I think you may well be correct. Either way it’s not so good for the team who unexpectedly finds themselves in that position!

We totally missed this and could have easily missed it until competition. Thank you for pointing it out.

I urge you and your team to go read the manual again, and keep up with game updates as well.

This is not the time to haphazardly read something.

It’s good you pointed that out. They include this diagram in the game manual which also really helped our team: 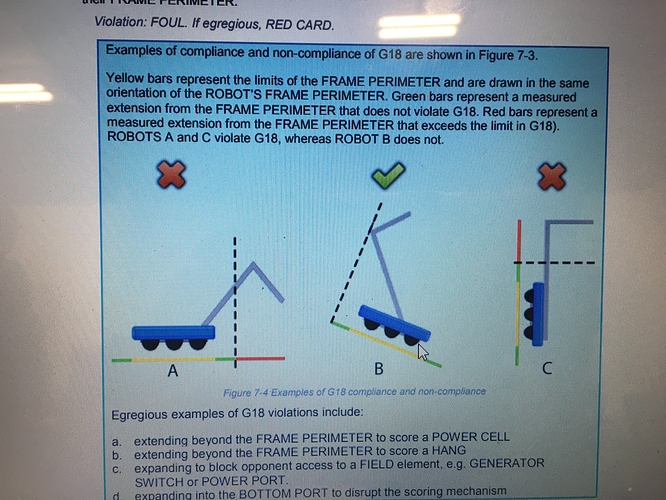 There are a dozen other threads this year that reference G18. At least half of them warn of this same thing when hanging.