When drilling, the chips come off as a constant thin stream and tend to wrap around the drill. This doesn’t really affect anything other than sometimes, when the chips melt into a very hard chunk, ugly rings around the drilled holes where the chunk ran into the stock. Currently running 10 ipm and 8k rpm for a 0.201 drill. Any tips on how to stop this feeds and speeds wise? Thanks! 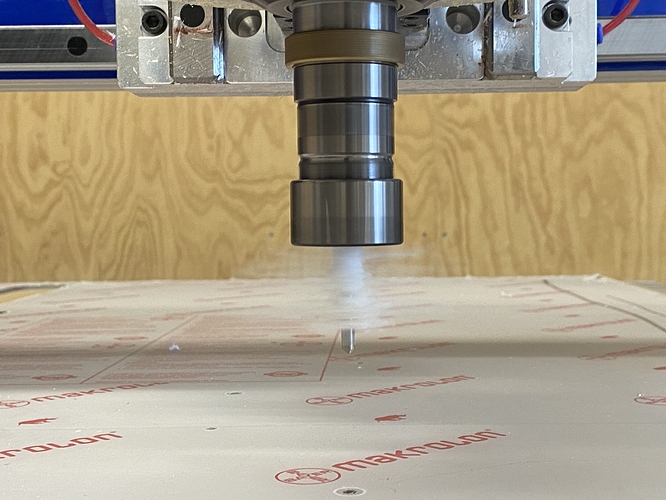 It seems that you have a low Feed per Revolution, meaning your chips become super thin and start welding together. I would try running around .005" per rev on a .201 drill. Having a more aggressive cut often solves that type of buildup on tooling.

We have the same problem and just clear the buildup by rubbing small piece of wood against the drill. Probably not the best practice but it works.

The way that I usually get rid of this is to use peck drilling to break the chip. It works really well for aluminum but sometimes with polycarb you can get some stringy chips.

Yeah, lots and lots of stringy chips is our problem. We will try peck drilling if the altered feeds don’t work. Thanks!

Conceptually, yes- generally you want to feed more per rev with a bigger drill. However, going down to .1875" isn’t a massive change, and .257" won’t be bad either. But exact feedrates are gonna be dependent on your testing to find what works best on your machine.

Agreed (based on drill press experience with polycarb). Feed somewhat faster/more firmly, and if that isn’t enough, back off and break the threads before they can weld to each other.

Also what kind of end mill are you using? If you are using a normal drill bit (double flute metal cutting) the plastic likes to stick to it. We use a 1/8 single straight “O” flute end mill. If the feed rate doesn’t do it for you

OP: There are router specific drill bits by the way, I would recommend looking in to those if you are dead set against using an endmill, however, an endmill will reduce your tool change times, so might save you some time in the long run, unless you’re putting in a ton of holes.

We had this issue earlier in the season and we did 2 things to help solve it, one, we upped our feeds to keep up with our revs and we also made a custom vacuum attachment which in addition to keeping the space around our router clean also worked to prevent chip buildup on the endmill.

Not sure how you are programming your machine. This not easy to do with some CAM software but when peck drilling doesn’t work. Using a M4 after each hole throws the spindle into reverse can clear stringy chips and prevent birds nest.

That looks like a chamfer tool, but I could be wrong

Unfortunately what you’re experiencing is called ‘Birds Nesting’ (for obvious reasons). Plastic does that (almost unavoidably).

Things to know:
Increase your IPR / feed. That’ll tend to create thicker chips and chuck them instead of birds nest them. Make sure you don’t do it too much or you’ll melt the plastic.

It’s not actually that bad for the endmill/drill unless it gets out of hand. Pause the machine and stop the spindle, and take them off every once and a while. It will mark up your parts if you don’t clear it, but it’s not the worst thing. Sometimes the nesting will get so bad that it will clear itself, but don’t rely on that

You could also take a brush and stroke downwards on the drill/endmill (be very careful if you do it while it’s on). The safer option is to do it with a compressed air gun, just blow downwards and it should send it away.

If you really don’t want to deal with it, you could always bore your holes instead of drill them. The chips are smaller and won’t be able to wrap around the tool. It will take longer but you could also use the same tool to machine other features.

We have the same router and that tends to happen to our drill bits as well. I am not a trained machinist but make do, we keep an air hose with a hand attachment by the router and just spray the drill bit with a couple shots of air when its jogging between holes. Just point it so it pushes the material down towards your stock. a couple good blasts and it will be all clear.

I’ve had the same problem, and mostly addressed it with airblasts which work most of the time. But I now prefer to bore holes with an 1/8" endmill which provides better results, is almost as fast, and you don’t need to babysit it with airblasts.

I ran into the same problem. Are you using a 60 degree cutter? If not that is one of your problems. 2nd you should only drill at about 4000 rpms. High rpms are ok for routing. And your feedrate should be about 60 to 75 inches a minute

Switching to peck drilling will keep your chips shorter and easier to deal with via air blast.

Get an air blast on it during/after each hole to clear the nest, and you’ll have much less welding. Forced air cooling into the bare steel will keep your bit temp lower.

We run our CNC router at 20000 rpm with a 1/8” endmill bit, we do not have issues with the polycarbonate “strings”.

I’d say bump up your feed per rev a bit for sure. You can also turn the spindle speed way down and/or plunge a little quicker. Alternatively, you can edit your post processor to pause above each hole and reverse the spindle at full speed each time for a second or two to toss this strings off.

A good rule of thumb for calculating drilling feed rates is (feed per minute)=RPM*(drill diameter)/64, all in consistent units. Therefore, try 25 ipm for a .201 spinning at 8000 RPM. This rule of thumb works amazingly well for drills from 0.002" to 2" (at least) diameter. Your RPMs are high for cutting polycarbonate without cooling. The tool can take it, but the plastic can soften and gum up the drill flutes if the holes are over, say, 2 diameters deep. It helps to have a brand new, razor-sharp drill.