Inertial measurement units or IMUs have been used in many products to detect the orientation of a device. From detecting the orientation of an FRC robot (or any other robot) to stabilizing a smartphones camera, these versatile sensors are found pretty much everywhere. This post is not written to teach you on how to choose a sensor for a robot, but instead was to see who makes the sensors used on many popular IMU sensor addons for FRC while also comparing it to what is used in modern smartphones.

The navX series of sensor boards by Kauai Labs are found used on FRC robots numerous times; including on the award winning 254 (The Cheesy Poofs) robot, Misfire.

Here are the chip identifications of three boards in the navX series.

STMicroelectronics provided all of the sensors for the newer versions of those boards while the original design (navX-MXP) utilized a TDK Invensense solution. Also, Kauai Labs is so far the only manufacturer of these breakout boards we have seen the sensors being coupled with a microcontroller. But also to be fair, we have not found/procured that many of these motion sensing boards either.

The rest of the known FRC motion sensing boards use an Analog Devices solution.

To compare our above findings to (relatively) modern smartphones, we will use the chip identification of the following four devices. 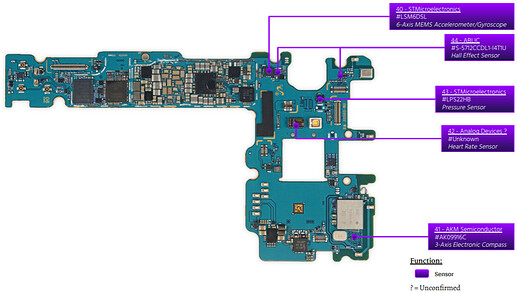 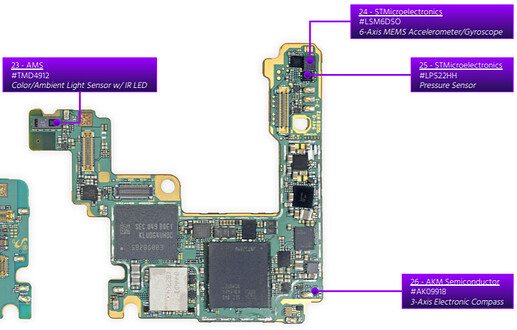 Below in this table has a list of boards (along with the 4 above phones) with the design wins of the Accelerometer/Gyroscope/Magnetometer listed out (if available in device). 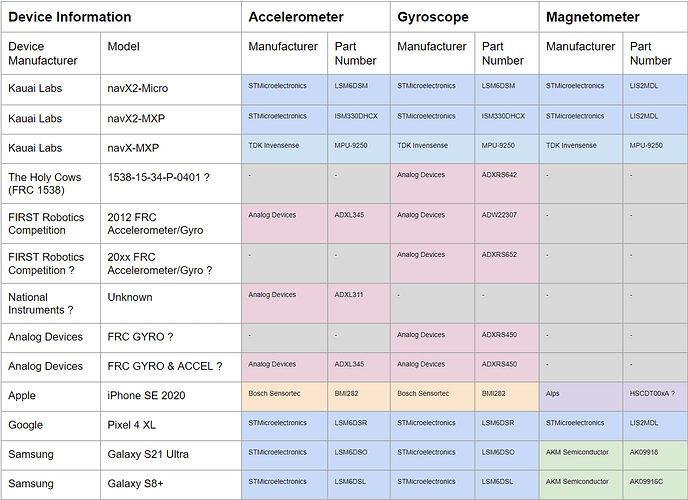 To make it easier to see who manufactured what sensor in the devices, we have color coded each manufacturer with a different color. Grey is used to fill the blanks of the sensors that did not exist in those boards.

As a side note, one of the regulators we have found on all currently released versions of the navX has been found on an earlier version of a FRC-provided accelerometer breakout board 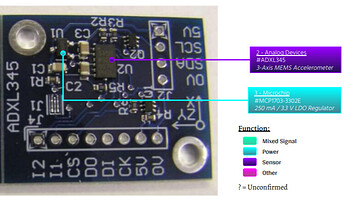 This article should be used only as an informative piece for interests only and should not be used in any key decisions.

This is interesting, but I would like to see the Pigeon included or maybe a discussion on the accuracy of each type.