Doing a feasability study with a local team as to how inexpensive you can do a custom frame based robot. The robot will hopefully be part of an off season competition or 2 - That is if we can locate a set of FRC legal electronics to run it. If not it will be arduino/ESP32/BTS7960 run.

Of course as its me there is a lot of 3DP I have been busy 3 weeks now with that (I am retired). The bottle neck is cad. I probably can print it in less than a week with what I have - If all the cad is done. I had designs to mount some toughbox minis but no toughbox minis and the budget is allready strained. I got 10 CIMs though so everything will be run by CIMS. Ideally some should be PG71 but hey - its a build out of what you have project

The dimension of the robot is 29.5 x 29.5 so about 118 circumference. The 1/2 in in each direction is to allow for Fiber Glass reinforcement if we decide on that.

So the composite in the frame will be plastic (HIPS and PETG) probably in some places wrapped in 10 oz cloth 1-3 layers. the square holes take 1/2 in square tubing 16 gauge either aluminum or steel. The decision has not been made yet if we go for a light weight (just shy of 100 lb) or if we shoot to get close to the 125 max. 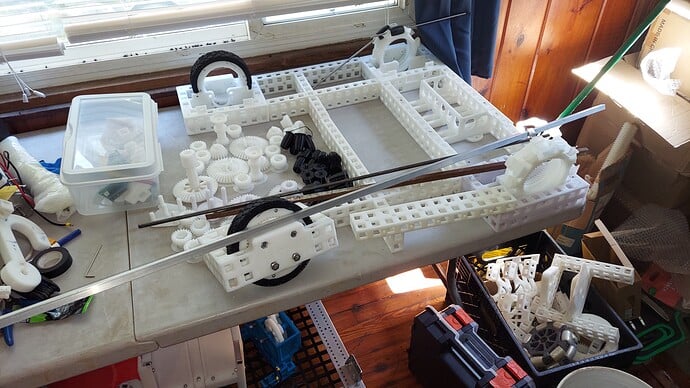 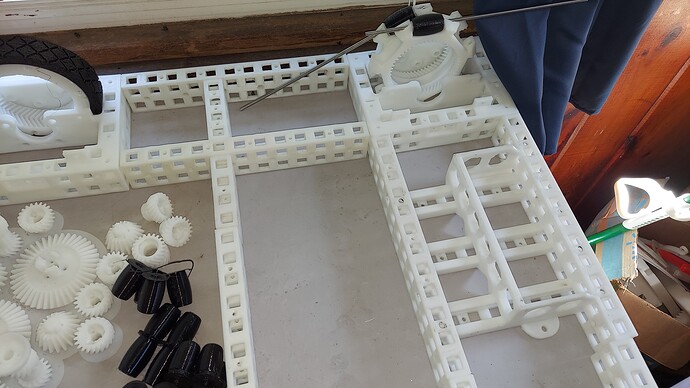 The frame will have to 6.31 in bumpers in the front and an almost 17 in cutout for the recessed shooter/ball pickup.

It will also sport a CIM powered with custom 40ish:1 reduction for climbing and a 2nd CIM with 20ish:1 for helping out and moving the arm to grab the next rung.

Here is some pics of the front wheel tank drive setup. It was desided to put the main wheels in the front (the opening) as it will make ball pickup and aiming in general easier for the driver. So the back where the climber is mounted will have powered omnis. The first stage is 41:19 on a bevel setup to save space so the whole drive module is 6.3 x 8.4 in thereabout. Allowing for a wide intake opening

Some pics of the tank drive module 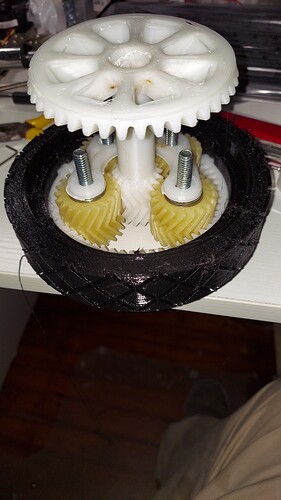 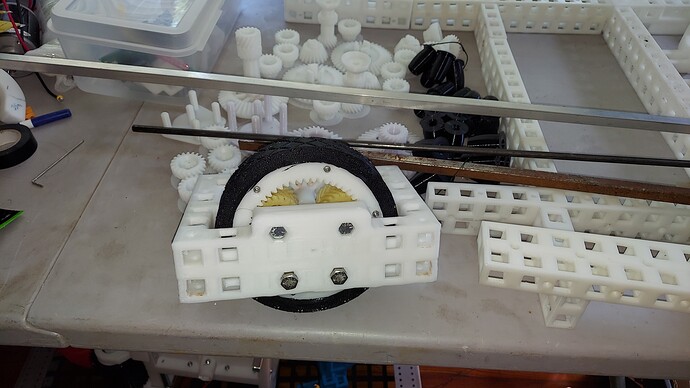 The rear will have the 2 in wide omnis with also a planetary inside and a bevel gear input. It was quite difficult to stuff the existing planetary from the front into a custom omni but looks like it happened (proof will be in it running and not breaking. The rim/omni setup might be a candidate for Nylon but for now its HIPS and PETG.

The prior tests have indicated that PETG and HIPS with a dab of silicone grease will way outlast a season. Now we will see if they survive the abuse of driving it.

If we can’t get the FRC legal electronics - maybe a relatively local team (NJ) might want to put theirs on and test it at an off season event. If not after some tests the parts will wind up in my next project.

The frame is based on 26.7mm section so a 28x28 section makes roughly 29.5 x 29.5 mm section allowing to be legar with reinforcement either fg or even 1/8 in AL plate. which would bring it to 29.75 x 29.75. (hence that odd measure
The square holes are 14x14mm allowing even with slight print imperfections and some slight possible warping to insert a 1/2x1/2 in square tube with minimal cleanup 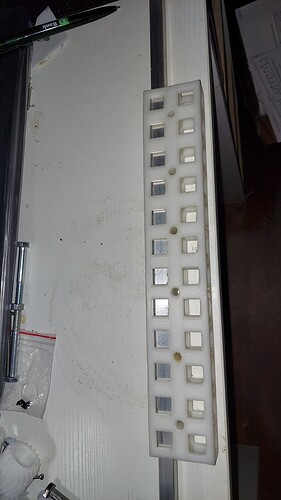 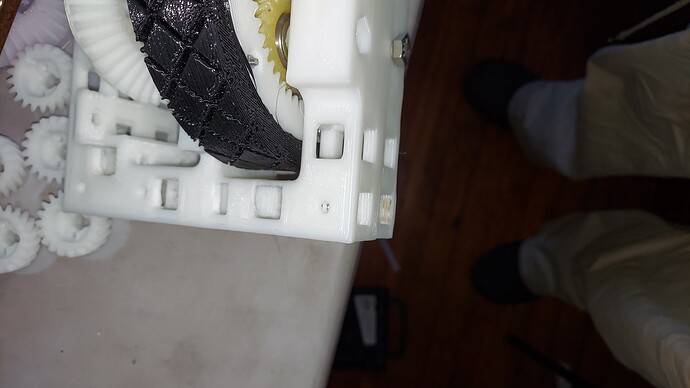 20220730_11364614624×2604 3.03 MB
At the corners where 2 bars meet holes are placed to allow to drill through both bars (5.5mm drill bit) and fasten them with an M5 bolt. The size was also determined to its current dimensions to allow to countersink or place the bolt in one of the squares to mount other things without having the head to protrude. It also allows bolt selection and Nylock locknuts with minimum protrusion. As bolts come in 5mm increment in pretty much any case there is less than 3mm sticking out of the nut when the proper bolt is selected

1/2 in square tubing will also be used as drive shafts. Plastic likes square better than hex 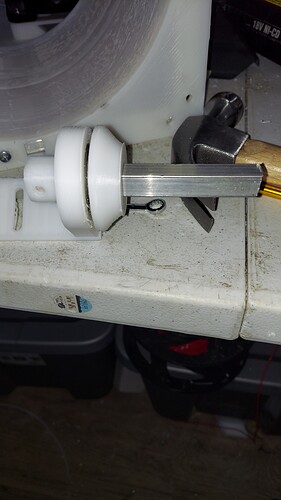 So all is based on a 26.7 x 26.7 cube with 14mm square hole and you can concatenate and combine them in cad to make pieces of your desire and complexity. In some cases a vertical mount is inserted to tie everything even together stronger 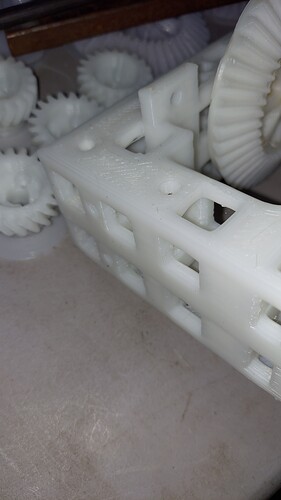 20220730_11593212604×4624 1.52 MB
So you could say the plastic defines the location of the 1/2 in square tubes and guides the holes that mount the tubes together so the strength is a combination of the plastic and the steel or aluminum. The weight of the tube for steel is .39 lb/foot or about 0.15/ft for aluminum. The whole can be wrapped in epoxy soaked 10oz or so FG tape (or CF if you have the $$) up to 5mm thick if you want to. And the bumpers mount flush as this is intended to not have heads of fasteners stick out. so the plywood adds to the structural integrity and evenly distributes the hit over at least 6 in of the composite structure.

I’ll be following the build with interest!

This is really interesting. So arduino can remotely run something such as this? How would one do this? Would it run on a raspberry pi or some other board, and would it use additional seperate hardware like motor controllers and voltage regulators and everything else you would need. Also, would the programming language matter. Last question, sorry, but do any/all arduino boards have the capability to remotely get input with wifi, or would it use something else that it would be connected to?

As someone who wants to 3d print and build a robot like this, this is extremely interesting, and any and all answers would be greatly appreciated. Thanks!

Edit-looked up the esp32 and bts7960, so now I know they are motor drivers, but all of my questions still apply.

If I have to go arduino I would probably hook up either an RF or WIFI chip to a UNO or something or use an ESP 32. Then you can connect 2 inexpensive small joysticks (like Game Joystick Axis Sensor Module - ZYLtech Engineering, LLC) or write a program for a PC with a big joystick but that is more expensive. Then you send commands from the controller to something like Gcode to the receiving arduino/ESP32 at the robot. The advantage of an ESP32 is that it comes with WIFI and bluetooth and its faster - not that that in this case is needed. On the robot side I might also use a mega as you get 13 pwm on that. Then you could go down and dirty and hook up to 13 BTS7960 to it (Double Bts7960 43a H-bridge High-power Motor Driver Module/smart Car/ - Integrated Circuits - AliExpress)
Or I am now adding a feature to my project of controlling 2 with a nano namely to run them in Servo mode like the PWM controllers that FRC uses then at some point you could hook them to a ROMI or ROBORIO.
In Anycase a mega is about $5-8 I picked up some nanos and ESP32s for 3-4 bucks at aliexpress a while ago and the BTS7960 are about $3 each so for the 10 CIMs you can do a control system for about $100 including the remote control As a PDP you can use some in line car fuses with some WAGOs on a 3dp board or some screw type terminals. So probably another $30.

Now as that might get done - we are very hopeful to either raise the funds or pick up cheaply/free some FRC legal electronics as then we could put it into an off season event as a legal robot. So wish us luck.

What power source owuld you use if you didn’t have frc legal electronics? Would you still use the 12v battery or something different.

12 V Battery as that is what is sitting on the shelf lol. It has to be 12V as the CIMs are 12V and arduino stuff will run well at 12 V too. If I’d had to buy something I’d probably go with 12v lipos or something like that that gives me longer running time for the same size. Higher Voltage would have advantages in wiring as you need less current for the same power as Watts are V * A and Watts is how you measure this but then everything would have to change the BTS7960s, The Motors, You’d need a VR for the arduinos etc. So it would only pay if you’d need some serious power like for a vehicle meant to move ppl from point a to point B so IOW golf cart on up

Idk how low you can get the latency but I have used these for quite some time and had a great experience.

I have only used this board for very low refresh rate applications but I see no problem scaling it up to a real time control system.

Side note the VS Code + Platform IO IDE is how I program Arduino stuff and it works well for me.

Tomorrow I hope to get to start cutting some steel/aluminum for the reinforcements after I make some drilling jigs as atm I only got a hand drill.

Sofar 138 hours of designing/Sketching on paper and CAD on the computer (about 90% of the time) on this project with little breaks to remove a print from the build plate and start another ones. My printers run atm at about 40% utilization as CAD is the bottle neck.

But once its cadded you can print it as often as you want. Everything will be published and shared that will be the last task on this project 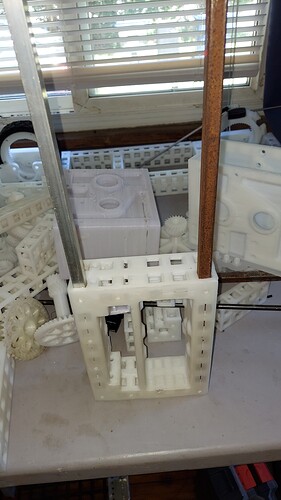 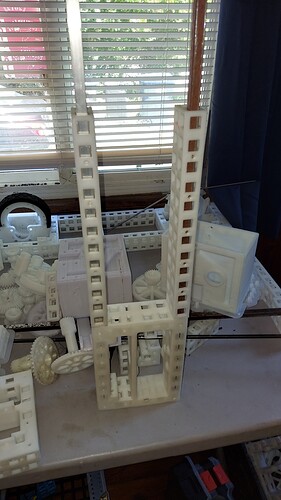 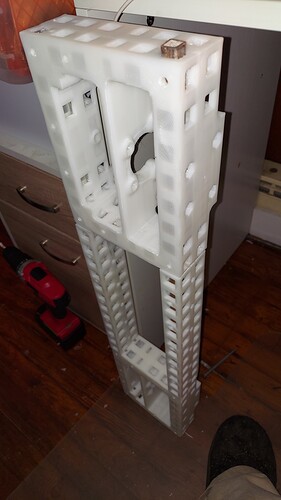 So insert the steel/aluminum tubes in the printed pieces. The pieces are printed in a manner that no perimeter is less than 6mm 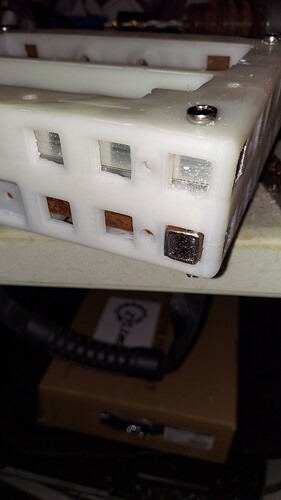 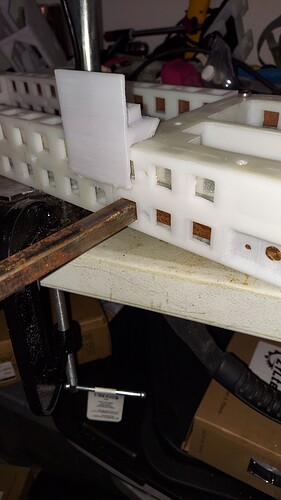 20220803_15394912604×4624 1.72 MB
Here the view of one of the cross pieces mounted but this one will be naked across to allow the ball pickup to go low enough to properly (hopefully pick up the ball on top a 3DP tool helping me to line up the drill bit as atm I am down to 2 hand drills one cordless and one corded 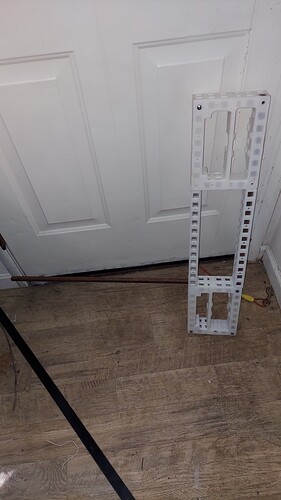 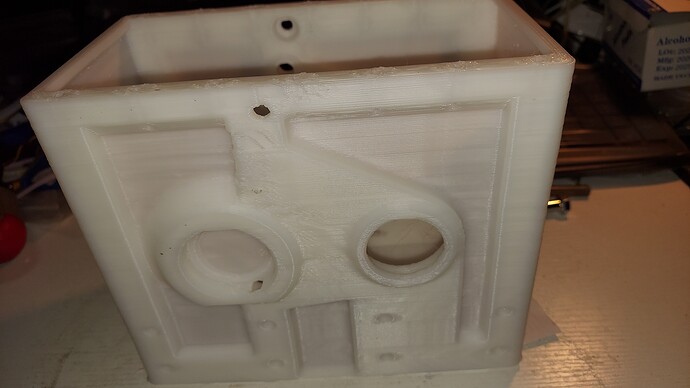 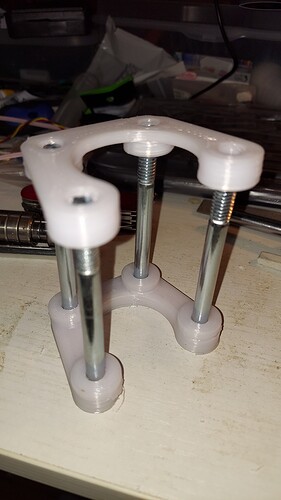 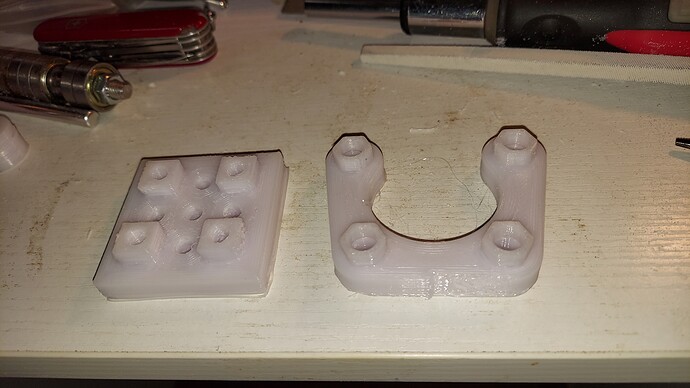 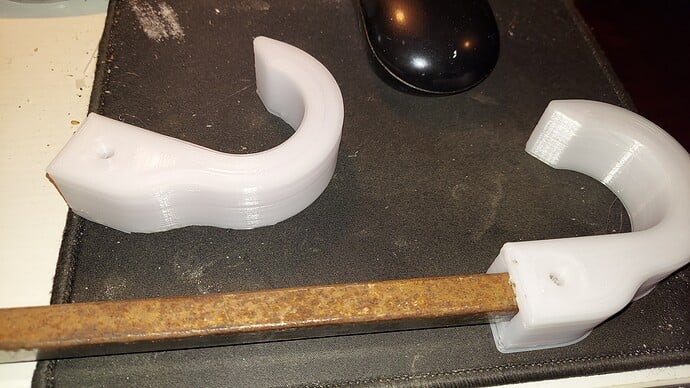 My team (1212) has used laser cut Delrin for a number of years, we started doing 3D router cut Delrin and polycarb in 2022. We found that Delrin frame rails work great especially when firmly fastened to the 3/4 plywood of the bumpers. We used dual frame rails of 1/8 Delrin that were about five inches tall; Very light and strong to sit on both sides of an octocanum drive train. We found that we can laser cut Delrin spur gears and sprockets that are tougher than 3D printed ones. 3D routing will enable us to cut thicker Delrin and polycarb to replace even more metal parts. Delrin cuts very well on a metal lathe too if you use sharp steel tooling, Square and rectangular polycarb tubing is generally available if you choose instead of aluminum.

I agree on delrin - I got a roll sitting here waiting for a proper enclosure and serious filtering as cutting and especially printing delrin off gasses copious amounts of formaldehyde and you don’t necessarily want to print that.

I believe cutting is stronger than printing - but I got nothing to cut with except a hack saw and so do a lot of ppl I know but I got a 3d printer. Now if you are talking machining plastic HIPS is easily machined too. But Delrin is stronger 3dp also allows you to do shapes you cannot (easily) cut like double helical gears etc. Delrin like Nylon does not need lubrication in most cases - Nylon machines well too. The enclosure of the toughbox minis (black stuff) that also mount the motor are Nylon.

Well we see if we are able to complete this project and ideally can test it at a competition.