If memory serves me right, this intake was remade a couple times but the highlight of last year’s bot I can remember beyond the “third” leg used for HAB climbs was sparkly Demogorgon intake teeth for me

Several of the later iterations had more sparkles on them 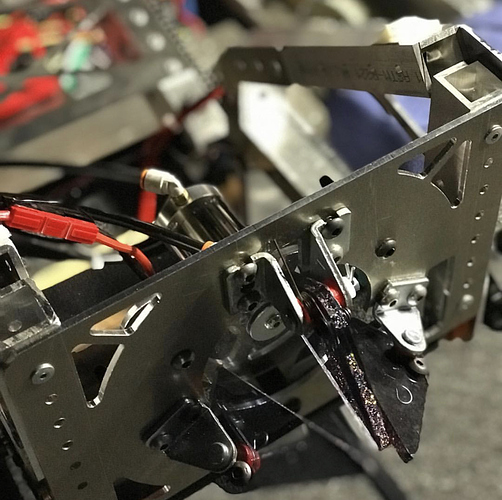 Do you have any tips for properly lining up a drill jig like that on a drill press? As silly as it sounds I have always ended up just fractionally off and end up galling up the insides of the drill bushings. And the one time I tried to hold the parts by hand and let the press “find” the center I ended up with a very dangerous plane rotor.

Thanks! It was a dumb idea that I expected to get nixed sometime around week 3, but it just kept working until eventually champs rolled around. Can’t complain, I guess!

I remember seeing that three point hatch grabber and realizing that we were being idiots. It’s a super cool design.

Do you have any tips for properly lining up a drill jig like that on a drill press?

We usually hand drill these with stub-length bits… here’s our training video which is part of a series on how we typically make our west coast drive chassis. Starting at 13:45 we demonstrate breaking a drill bit off inside the guide bushing, and we give several suggestions for what we could do better.

That’s cool, what were they made with a CNC, laser, or water jet?

All the plates and tubes were done in-house on our CNC router. We probably make ~80% of our robot parts on there. The billet parts and flywheel were made in our sponsor’s machine shop, one on a 3-axis mill, one on a 5-axis mill (by mistake), and they flywheel on a lathe. 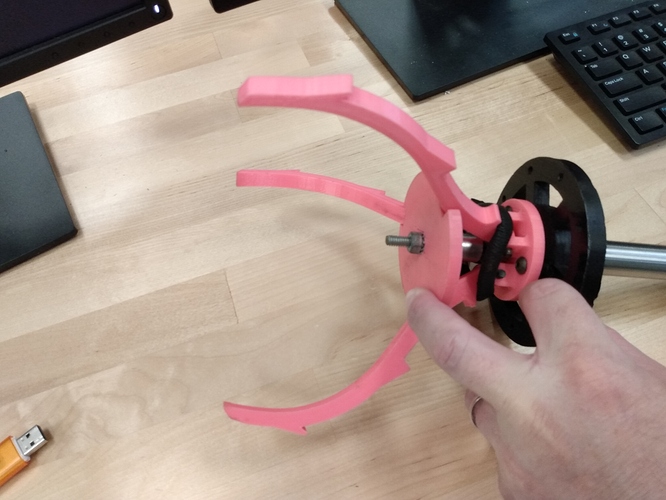 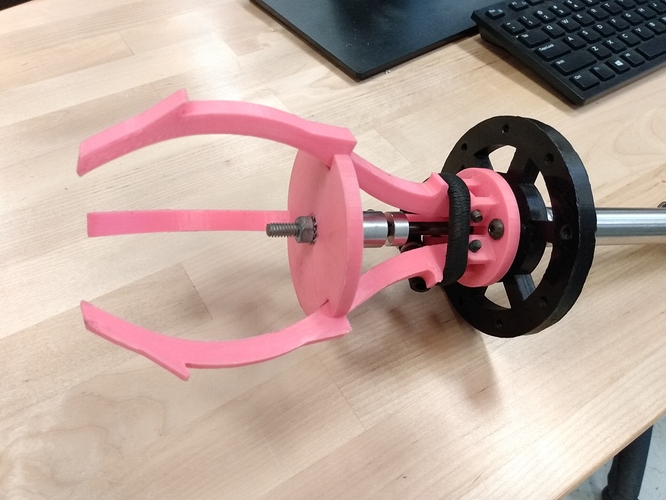 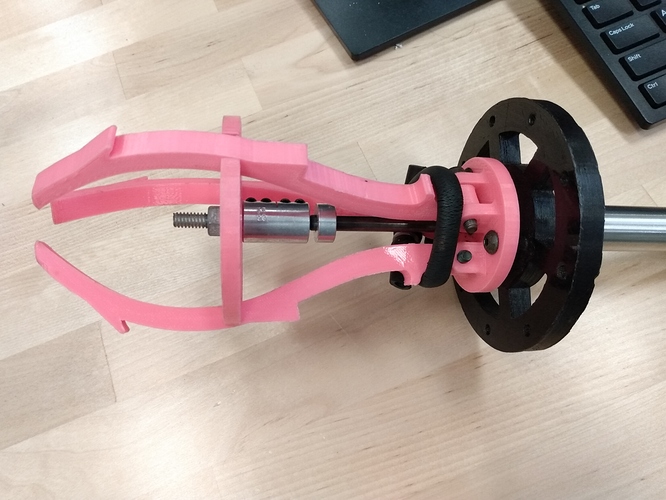 Not sure, since I wasn’t here last year, but I believe we got everything up and running on or before Bag and Tag Day. I’ll let you know once I get a more precise answer.

(I’m not sure when your rookie year was since it’s not on your profile, but I’m assuming you don’t know what it is: it marks 6 weeks since the start of kickoff and teams aren’t allowed to work on the robot itself after bagging it up. It ended this year, but 612 is continuing this tradition-we just do it the day before comp. Also welcome to ChiefDelphi

Edit: received answer. Everything was fully manufactured a week before bag and tag. We were one of the only teams with a level 3 climb week 1 i believe. 1st in the district
For more info: 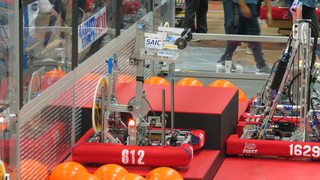 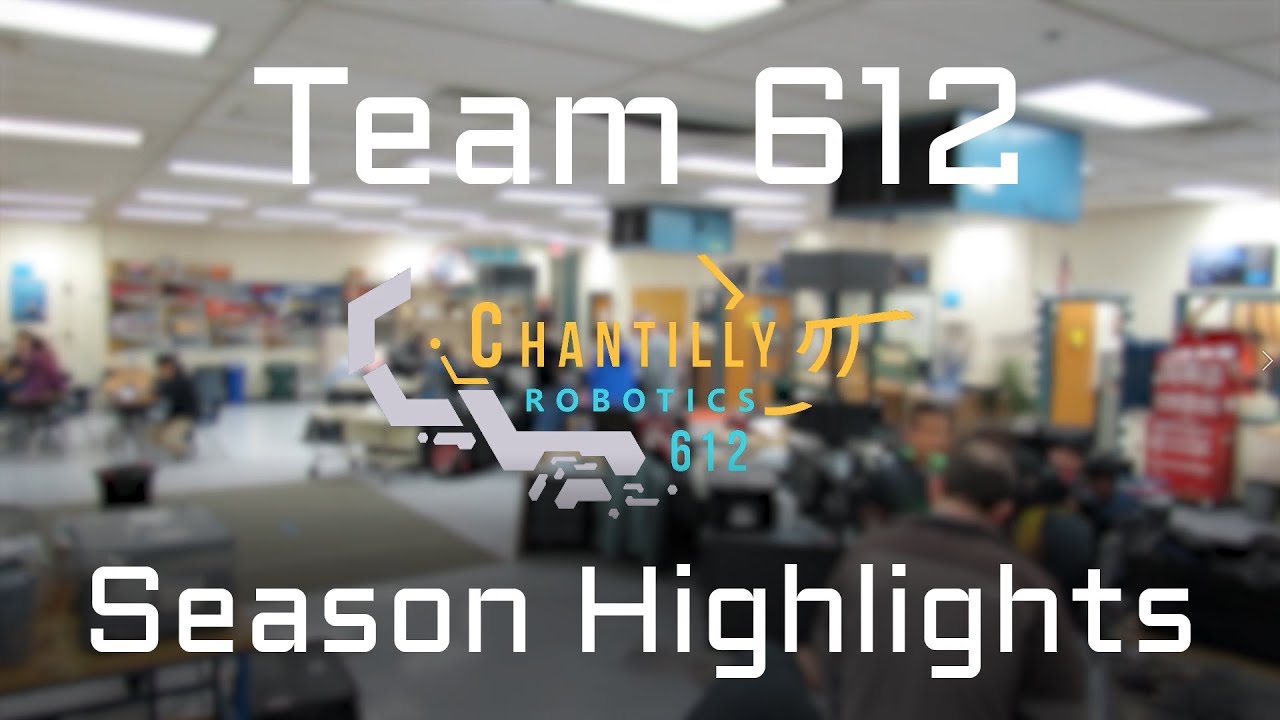 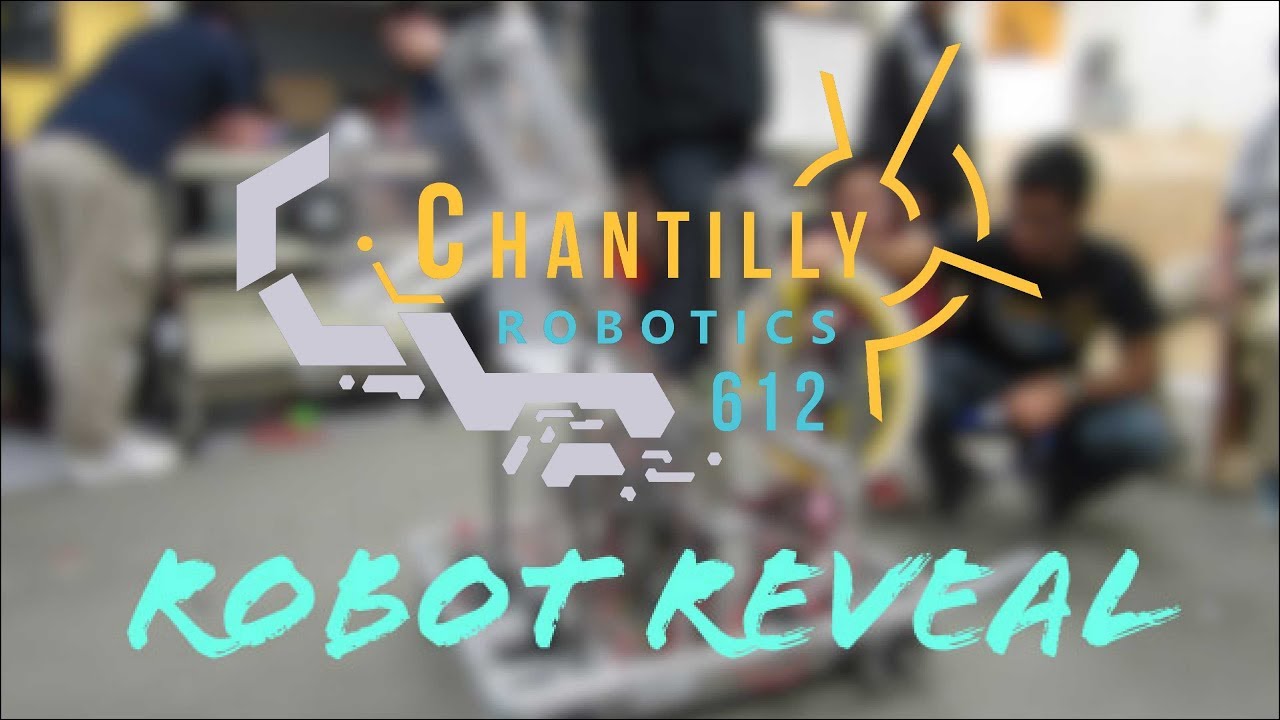 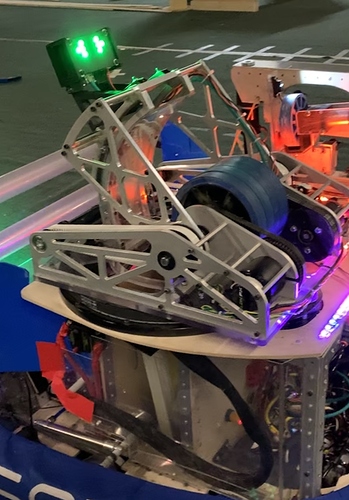 I thought our turreted shooter assembly looked pretty cool. This was our first time building a hooded flywheel shooter so I think all things considered it turned out nice. In order to save space we had the tether stowed on the side of the robot behind a polycarbonate panel and when the turret spun it would feed around the inside of the turret.

Not to sidetrack the thread with an in-depth discussion, but what is the purpose of the outside belts (grey) on each side of the turret? Picture please. 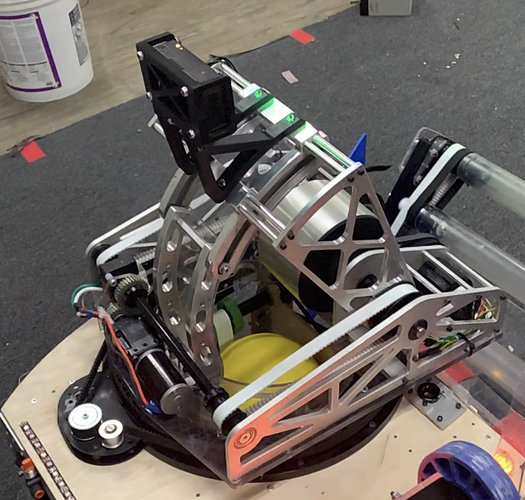 Those belts control the angle of our hood. There’s a BAG motor on a versaplanetary behind the shooter.

Cool Beans! Excellent performance at Granite State. Lots of nice features on the bot. Hoping y’all have continued success in 2021.

I was really pleased with all the cool (and functional) parts on our robot this year. I have to say this is my favorite. We had a problem that was noticed after everything was built (little over a week before comp) where our intake would jam. It was easy enough for the drivers to correct, certainly a waste of time. The issue was, everything was VERY tightly packed to stay within frame. One of our students came up with this 3D printed solution. The geometry ended up pretty advanced to miss all of the other moving parts around it. Ended up working well. I thought this was a pretty cool application of a printed mechanical part on a robot. 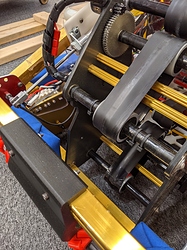 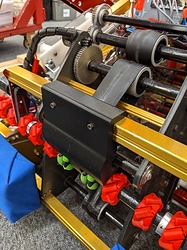 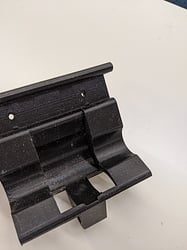 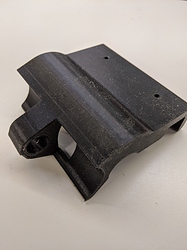 We probably make ~80% of our robot parts on there.

Not to derail the thread, but i do think it’s interesting-
I’ve actually looked into this in our BOM we made for manufacturing this year, and the machine that made the most parts on the robot is actually the 3D printer with 280 out of the 633 (in-house) parts, compared to 240 from the CNC.

Turns out there’s a lot of spacers on the robot

How do you keep track of all the parts that need to be cut/printed?

So far we’ve been making google sheets for it manually, basically going part by part and typing down the manufacturing process along with other details like quantity and material for each part in the robot. Right now we’re actually working on automating the process, i’m not too involved but @Solitude and @orel can give more details in DMs if you’re really interested. We’ll probably publish a thread about it when it’s actually ready.

I’m just gonna keep using this thread to flex on cool stuff we did in the 2020 robot, since competitions got cancelled and we didn’t get to do that nearly as much as i wanted to 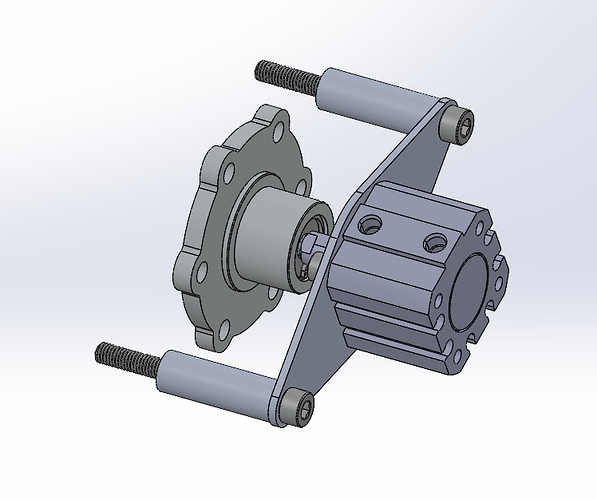 Capture748×626 90.9 KB
Custom friction brake, basically an Andymark hex hub held on to the pancake with an internal snap ring with a piece of rubber on it, turned it in-house on the lathe. 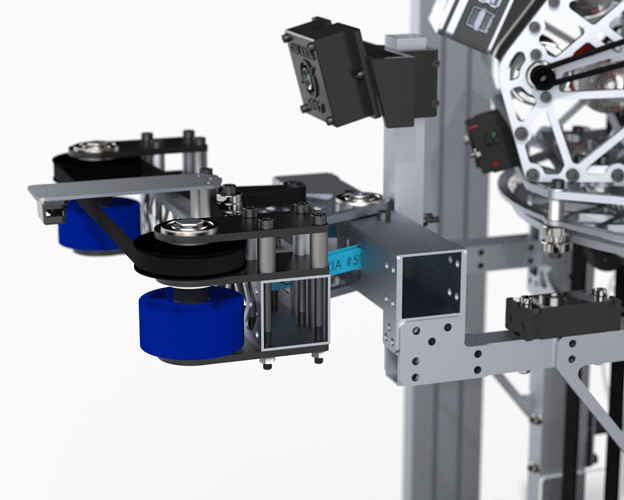 Picture11992×1594 3.64 MB
I guess since we’re doing whole mechanisms now i can’t not mention our control panel mechanism. Since we had a tall robot we didn’t need a linkage for it, but we did put it on a pivot to make driver alignment easier, we initially wanted to put surgical tubing for the compliance but ended up using team wristbands (mostly cause it was way cooler). Also it had the coolest serpentine belt path ever.

Apparently this is just what happens when you give one of your best designers unlimited time to make a control panel mechanism. 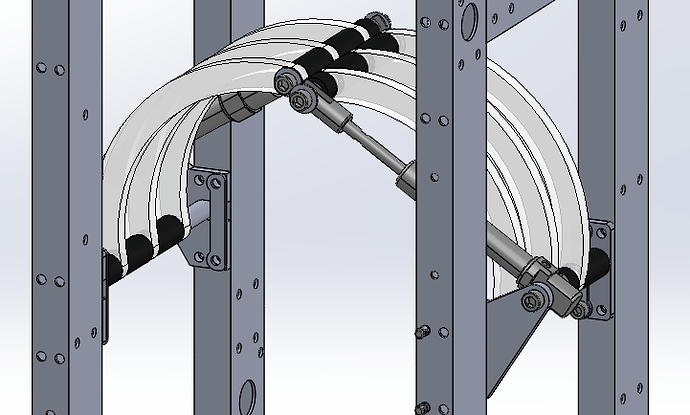 Capture721×434 62.6 KB
This was our mechanical hard stop for the indexer (obviously a lot is hidden in this pic to make the cool part more visible). These were basically 2 polycarb claws that folded with a pneumatic linkage, they were meant to stop the power cells from going forward, making them all slip in place against the timing belts. The really cool thing though was that pretty much the whole assembly of it was rivets instead of bolts, the axis of rotation is just a hollow tube press fit into a slot in a plate, and held in place by another plate that bolted onto it (that could’ve also been rivets in theory, but we used bolts to make it easy to remove in case we wanted to take the system off). The claws had very little friction with the aluminum tube, so it was basically on a bushing. 3D printed spacers on the tube kept the polycarb plates apart.

Last but not least, the last part i ever tried to machine as a student in an official season - our vision module holder. 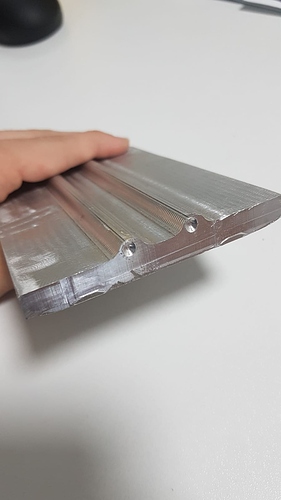 WhatsApp Image 2020-07-25 at 16.09.10900×1600 57.5 KB
Originally designed for 3D printing, it broke once when the robot fell from the meter high stage where our practice field is, so naturally we took it as an excuse to make it out of aluminum. This was our first and only time when i was a student doing any 3D CNC operations. We were about halfway through when we got the update about competitions being cancelled, and we didn’t feel like going on after that. I’ll make sure we machine a finished one in the 2021 robot though.
14 Likes
orel August 18, 2020, 6:10pm #94

About automating this process we have been working on a python script that seperate the parts based on their subsystem using their SKU the source of the SKUs is from the automatic BOM you can get out of SOLIDWORKS. In addition to that the SKU also contain each phase of manufactoring per part. The script update all of this information into google sheets. 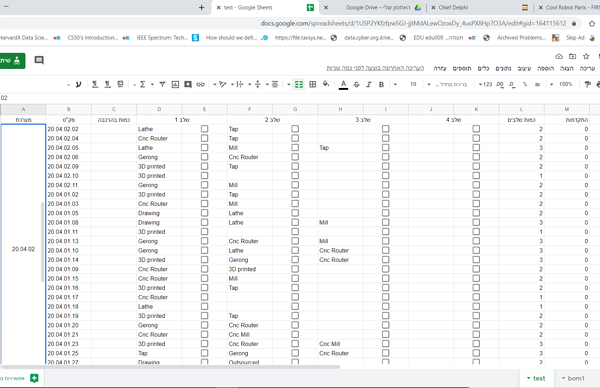 The hopper on this robot was free-hand bent from round tubing into a pitcher shape to spread open the poles on the mobile goals. It’s not a construction technique you see much, or at all, anymore. 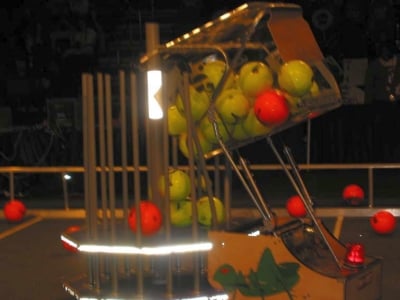 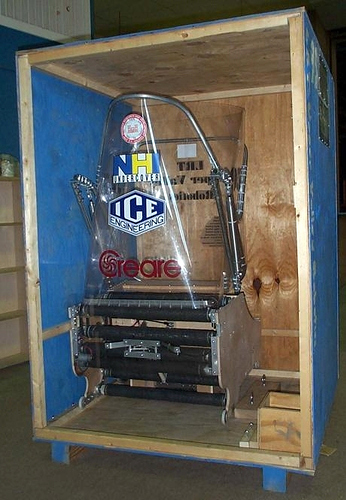 We built it in the Ice Engineering lab at CRREL and he was stored in a cold room. So… you know…