Disclaimer: I expect to never build this drive train… and Yes I know that you would probably brown out, but it is fun to design things that are a bit unrealistic.

With the introduction of the NEO brushless motors by REV people are starting to design more and more compact drive train gearboxes. Here is my entry

I expect if anyone would ever actually run this drivetrain in real competition play they would only use one of the two NEO “PODs” so as not to brown out constantly. The reduction currently is pretty modest but can be geared down more using a sprocket reduction. This is designed to push the envolope of drivetrain design and not to be a final design

The orange parts are 3dprinted and the main chassis is 3x1 1/8 wall that is heavily slotted. Currently set up with 4" wheels but 6" can be used depending on bumper mounting and drivetrain length. (this one is 30"). The 4" version with a belly pan will have 1/4 in of ground clearance and I highly doubt can climb onto the HAB. CAD done in Fusion 360!

Photos, PDF of Parts, and Parts list with weights attached. 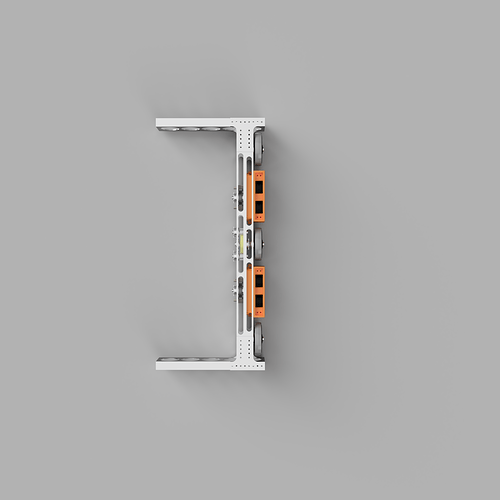 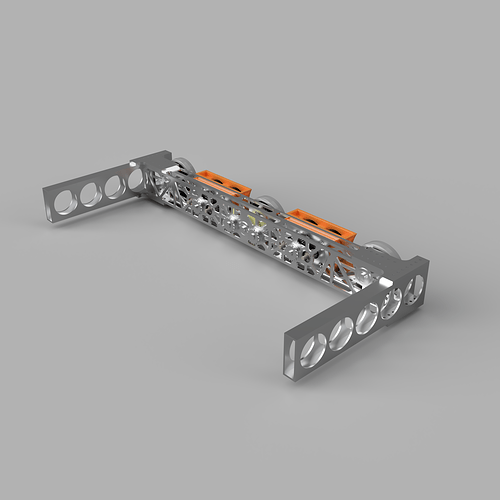 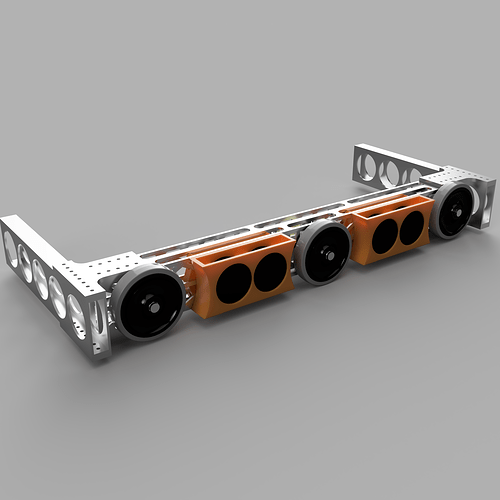 Would love to hear your suggestions and comments.

We have an 8 NEO drive train but thats because we run swerve drive (1 NEO for rotating the module, 1 NEO for spinning the wheel, then multiplied by 4). If this tank drive actually worked without browning out constantly it would be ridiculously fast and I for one would love to see it.

You’ll never brown out if your battery is big enough

4270 had a 6 motor NEO and that thing was almost literally impossible to play defense against. Hope to switch to NEO’s ourselves next season!

This is a very unique concept and very well designed. Since you’re not using very much of the outer tube, could you replace that with wider wheels or a longer cantilever and lose the weight of the tube?
The reduction I see here probably isn’t sufficient for 4" wheels- by a factor of two about I’d say. 16fps is a good free speed to aim for with a single speed drive usually.

How would you plan to machine the 1/2-3/8 hex shafts? You could mill them, but in either way I’d be concerned about the 3/8" hex twisting or shearing under load.

What’s the purpose of the 3D printed housing around the NEOs?

Of course this is all theoretical.

I plan to add a sprocket reduction using the sprockets between the gearboxes and the wheels, using more gears will take up more space.

We would mill them, It serves as a way of not needing a snap ring on the far side of that shaft (it would interfere with the NEOs), I believe that this VEX gearbox uses 3/8 hex and it works fine (https://www.vexrobotics.com/wcp-ss.html#Kit_Contents) have you twisted 3/8 hex shaft on gearboxes? If anything they would be taking less load than the VEX gearbox.

Although I am sure you current draw would be less given that the turning motors are not under alot of load (right?)

We got pushed sideways by 195 at CNY while trying to play defense on them. https://youtu.be/xktun99LhTM

I think this begs the question… how many motors can you put on the drivetrain if you are only a defense bot… Could you go 12 NEOs if 8 works?

2 NEOs per their 4 mecanum wheels

I thought our 1 NEO per wheel was overkill due to the low traction, why did you guys choose to go with 2 per?
Edit: Sorry didn’t realise that isn’t your team…

Unrealistic is a strong word, we might of talked about upgrading from 6 to 8 neos on our drive for champs

Edit: But like others have said more goes into your drive characteristics then number of motors, we have a very specific reason for wanting to go to 8 which involves the 40amp breakers and redundancy more then anything

I think you’re gonna run out of usable traction at even 6 NEOs with a reasonably geared single speed gearbox. That 8th one is going to do nothing for you. Once you are spinning your wheels in place when pushing, you’re not getting more torque out of that system with an additional motor.

8 neos might be a bit overkill we can run our WC dt with 4 Neos but prefer to use 6. In our latest regional in a match we were able to push 2 robots simultaneously

We are running a 6 NEO drivetrain on our bot with 4 black smooth grip wheels and 2 omnis in the front. We have em in a shifting gearbox with about 19 ft/s high gear and about 7 ft/s low gear. By far my favorite drivetrain I have ever driven. Pulling to many amps was a problem for us before correctly implementing current limiting however 8 NEOs would be a scary drivetrain if possible. Here a video of us playing defense in the semifinals at Great Northern Regional. https://m.youtube.com/watch?v=gOFFa6TrWiA

At a certain point, the law of diminishing returns really kicks in. A 4 NEO drivetrain would draw 1520W at 160 amps, which runs virtually no risk of brownout.

A 6NEO drivetrain would draw 2280W at 240 amps, which runs serious risk of brownout and is likely impossible - a more likely case is 30A per motor, in which case you do 1710W. This doesn’t account for the voltage drop of the battery.

An 8NEO drivetrain, if the battery had no internal resistance, could hypothetically do 3040W. But this is impossible - the voltage would drop well below the RoboRIO restart threshold. More likely, you would have to run the 8NEOs at around 25A each, which gets you to 1900W. This also doesn’t account for the voltage drop of the battery.

The limits of drivetrain power are ultimately determined by the limits of the battery. Dropping below 6.3V will cause abrownout. Voltage of a non-ideal battery is given by Vreal = Videal-(Current*Internal Resistance). If the internal resistance is 2 milliOhms, you could draw up to 285A at 6.3V, which means your battery is putting out 1800W. But you are dancing on the edge of brownout, and one turn, stall, or collision will be very inconvenient.

The bottom line is that you are fundamentally limited to around 1800W by the battery. By adding motors, you gain a few hundred watts at most, while seriously increasing your risk of brownout. I’d personally love to see an 8NEO drivetrain, and I might design one - but unless FIRST changes battery regulations, I’d be terrified of using one in an actual competition.

6 wheels? I was expecting mecanum…