We have a folding platform truck, see HF 24" x 36" truck. The design is extremely simple, using only three 8’ 2x4s, some screws, and 4 carriage bolts to attach to the platform.

Please let me know of any easy fixes or design flaws! 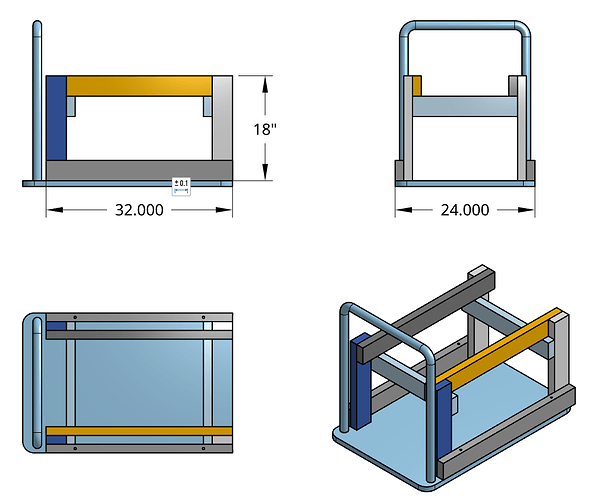 I see one major design flaw. Your CAD does not show wheels. /s

Mainly I’m concerned about the cart collapsing away from the push handle. Probably not an issue depending on your screw setup.

I would consider replacing the casters with one that have lockers. Especially if all 4 of them rotate.

Brings up a good point, we’ll likely make some wheel chocks for this. Only two of the wheels are swivel.

If you are looking for any inspiration, this thread from 2019/20 has a lot of Robot Carts, CAD, and fun ideas

Hello once again Chief Delphi. Me and a friend are starting a project to build a new robot cart for our team team who right now has a very old beaten up robot cart so if you could post pictures of your robot carts that would be great so that we can get some ideas for what we want to do. Some ideas would be super nice as well! Thanks, Quack

Post #138 specifically has our team’s newest cart, which is a decent cart. Not perfect by any means

We wanted to easily be able to reach under the robot, which this design will hopefully allow us to do.

This works well. for 2016 and after, 3946 usually built a similar “workbench” designed to go on the floor to allow the pit crew to work underneath. I recommend a face shield when you do this!

Not a critique but general advice - make sure that the height of the cart + the height of a robot fits through a standard doorway as well as every doorway in and around your shop. Otherwise you’ll be in for a nasty surprised the first time you try to take the robot anywhere.

I would definitely close off the front and the back of the base so you can put things there without them falling off. Ours always has a number of needed tools, spare battery, zip ties, duct tape, etc and they would likely bounce around and fall off when moving the cart. We also added a few dividers so we have a place for batteries and water bottles. Initially we kept all batteries in the battery section, then found it made sense to put only charged ones there, and if we had a dead one that couldn’t go straight to the pit, it would go in the bigger open space so we didn’t confuse them. Yeah, charged / dead battery tags would be better, but we didn’t have any

IMO mostly unnecessary. It would only be useful for load in, which sometimes happens on weird ramps and there’s a bit of standing around. Never seen a venue where they’d be desired during competition.

If it’s cheap to get the locking version casters, might as well, but literally one inconvenience from them (locked because they bumped something or whatever) and I’d swap them out.

Having your handle straight up like that can be a real ankle breaker.
you want it to be n front of you cart either by curving it or extending it at the top.

Thanks, it does. It’s the HF one I linked. I just didn’t care to CAD it with the extra bend.

looks great to me. only suggestion is add a toolbox underneath. but that would negate your ability to reach under the robot. we have found having the toolbox on the robot transport has been great when you need to do maintenance in queue. for example quick turnaround matches, playoffs, finishing work that started in the pit, noticing something that was missed, etc.
also we always carry a spare battery with us in case something goes wrong, so we have a spot on our cart for those as well.

My son’s team built a flat deck cart like that but larger. They were going to build a support structure to raise the robot up to make it more convenient to work on but never got around to it. They ended up using one of the many totes they had accumulated. The tote was typically used to bring parts or tools to the competitions and would otherwise be in the way.

118 uses a large flat deck cart with Velcro covering most of the top surface. They make a support structure to fit each years robot (or not) and secure it to the top of the cart with the other side of the Velcro. Some years, the support structure is just a few pieces of 2 X 4.