CRTE Can Motor Controller Libraries Not Showing Up 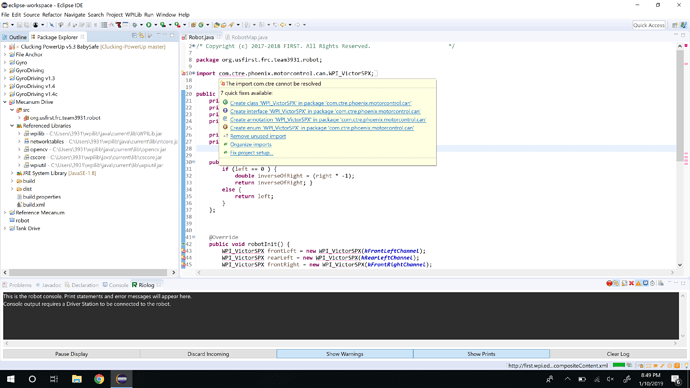 I was attempting to use some new Victor SPX’s but found that the CAN version was no longer supported by the WIPLIB libraries and that CRTE’s framework needed to be installed. After installing the newest version and selecting C++/Java libraries it did not show up in my referenced libraries so I could not program the Victors. Did I miss a step when installing the libraries or something? I tried uninstalling and reinstalling them but that did not work. I really hope this is a stupid mistake on my part.

FRC no longer supports Eclipse, so they have moved over to VSCode…unfortunately there is some syntax differences. Sorry dude, but it sucks for all of us.

I recommend you read the 2019 documentation, as a lot has changed: http://wpilib.screenstepslive.com/s/currentCS/m/java

You can learn more about the reasons why we switched from Eclipse to vscode+GradleRIO in my reply here: 2019 Kickoff Release of WPILib

So I should just bite the bullet and move to Visual Studio?

Oh okay. I don’t know how I missed that. Thank you guys, I really appreciate it.