You can also find the latest firmware CRFs at each product page (the installer also installs them).

We received a small number of Falcon RMAs with a unique failure mode. After failure analysis, we found a circumstance where the tank capacitors inside the Talon FX can be damaged if certain conditions are met. The conditions require the following…

@ozrien Any idea on the estimation of when the update will be out for the other problem that you have found with the voltage? Or just soon? Thanks!

Working on it now. The fix is done, but the release time will depend on the regression-testing results. We’ll put it up as a separate download (so you can get it faster). I’d like to have it out before the weekend so teams can update before week1.

Awesome because we have noticed this array of lights so it would be great to know it shouldn’t happen with this update! Thanks again!

Any word on the release of the update?

I just checked and it looks like it is out on their website just no one posted about it. Not sure.

@ozrien for the voltage problem you were talking about, I think we had that problem, but I wanted to check to make sure:

A few days ago after testing the robot for a while (low battery voltage), we noticed the CTRE motor controllers on the CAN bus were blinking orange with an occasional red. We noticed this only happened when one of our Falcons was on the can bus and once we took it off, they blinked normal status LEDs.

Will this update prevent this from happening again or is this a separate problem? We haven’t been able to reproduce that problem since we restarted the robot.

Note that its marked as a pre-release, which is probably why CTRE hasn’t publicized it.

Can you send a link to this? Cause where I go it doesn’t say pre-release. (not sure how to get to their forum page where it talks about each update, ect.

I can confirm that 20.4.0.1 is the released fix.
It’s marked as pre-release on github because it hasn’t been released as part of an installer yet - for all intents and purposes it’s release firmware.

So we should be pulling it down onto our robots before this weekend?

A few days ago after testing the robot for a while (low battery voltage), we noticed the CTRE motor controllers on the CAN bus were blinking orange with an occasional red.

The documented issue references the hardware fault pattern, which is red/orange with no pauses. See Users Guide for the exact LED pattern. 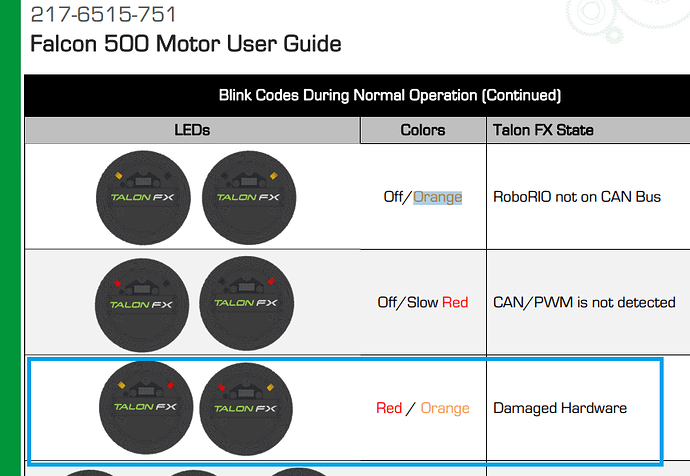 When this occurs, the self-test will also report hardware status fault.

I think what you are reported is an occasional red blip on the LEDs.

So we should be pulling it down onto our robots before this weekend?

I recommend pulling it down. In testing there were no regression issues. This firmware also adds some new sticky faults, which will become visible in the next installer/tuner update. But since sticky-faults are telemetry only, you don’t need to wait for the installer.

Note that its marked as a pre-release,