Cutting Aluminum on a Table Saw

I have seen youtube videos of people using a table saw to cut aluminum extrusions as well as 3/4" plate using an ordinary circular saw, all with little effort. How is this possible? Does anyone else do this?

I want to use my cheap Mastercraft table saw. What should I know?

I really wouldn’t do it on a table saw due to an increase in safety concerns, using even an aluminum blade on there, you could burn up the blade therefore needing cutting fluid and someone constantly spraying or the greater chance of a kickback or the piece being completely ruined, given the piece is harder than wood and wood is still easy to kick back it will be a whole lot easier for aluminum to kick back given that it is a harder material and especially if it’s got multiple places to grab on a piece of 80/20 or hollow extrusion

If you’re looking for a fast way to cut tubing and bar stock, look into a metal chop saw. Way faster than a band saw and way safer than a table saw.

I would avoid using a table saw for metal, simply because of the risk associated with kickback.

Even chopsaws are risky when using a metal blade. Just the other day I got lazy and raised the blade before it stopped spinning, and it grabbed and chucked the cutoff out the back.

Whichever method you choose, make sure you have a blade specifically made for cutting aluminum.

If using a band saw, try to use a low tooth count per inch so you can more effectively cut. Blades that are capable of cutting steel are pretty garbage at cutting aluminum.

I’ve done it with some fairly thick plate. I wouldn’t recommend it, but it was the tool I had.

A carbide tipped blade, a 240 volt motor and patience are important. Most anti kickback devices probably won’t work well, but a riv knife does.

like others have said. wouldnt reccomend. but totally doable if no other option. just make sure you go really slow and use plenty of cutting fluid. and dont do stuff thats to thick. you can use a cheap table but dont skimp on the blade.

It is possible but hazardous.

I was using a wood chopsaw, with a metal blade, to trim a short piece of 2 x 1 tube last year. One of the C-clamps slipped and was thrown past my head…

Edited to add: Harbor Freight sells a portable metal cutting bandsaw for about $150 and gets pretty good reviews. Replace the blade with a Lennox bimetal one for around $25. I think Swag Offroad sells a lot that holds it vertical and adds a small table.

They do make saws that are made for cutting metal that look like regular circular saw, they are lower RPM and have specific blades, and they work very well with no lube necessary.

I want to use my cheap Mastercraft table saw. What should I know?

You should know better.

That sums it up perfectly.

I see no problem cutting soft aluminum on a table saw, but you have to use a blade that’s designed for it. Same goes for on a mitre saw.

Don’t use this blade for wood…change the blade if you’re going to change the material.

Absolutely one of the best tool purchases we made this year: Only$140
https://www.homedepot.com/p/Evolution-Power-Tools-10-Amp-7-1-4-in-Multi-Purpose-Chop-Saw-RAGE4/203661791
I have spent almost that much on busted Diablo Aluminum blades for the old wood saw. 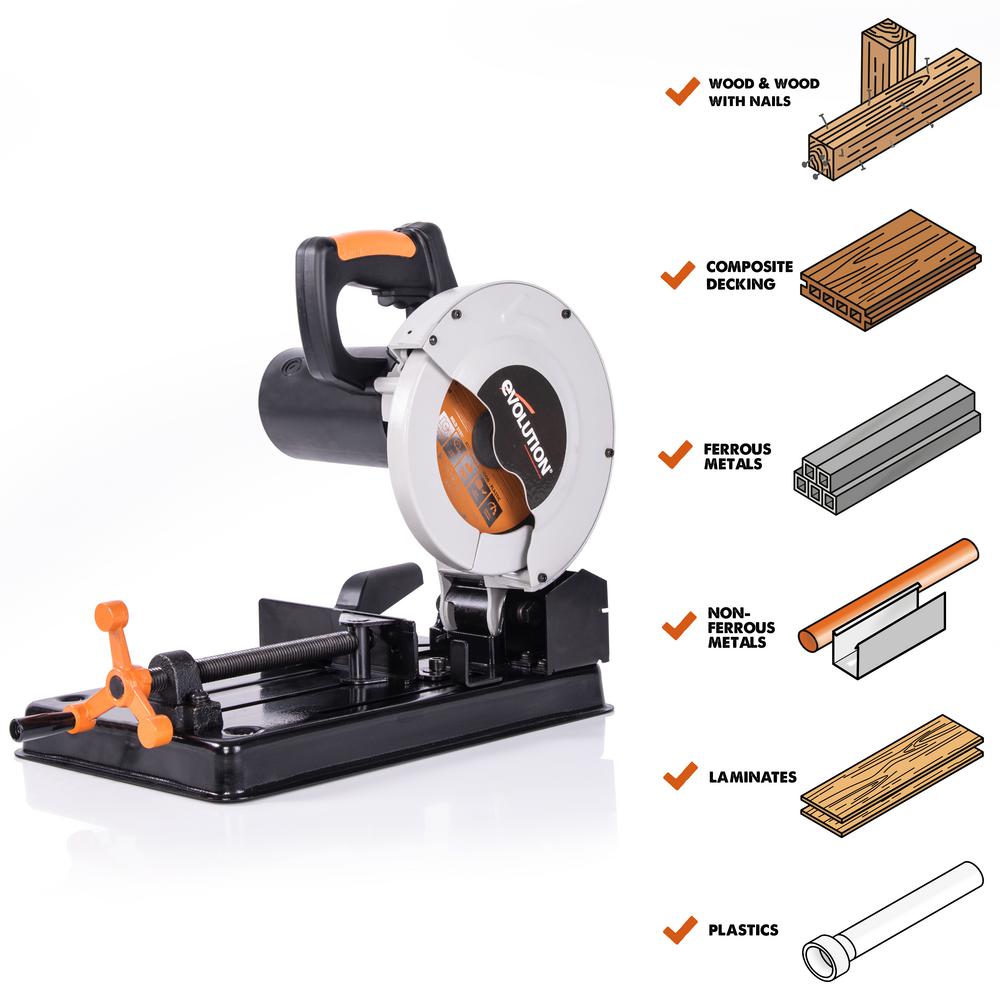 I did this for a while using a diablo aluminum-cutting blade, but there was still the occasional “that’s not right” hit or thing flying. Chop saws made for wood just go too fast when hitting aluminum. Last month I bought this from Home Depot; quite happy with its performance cutting wood, aluminum, and steel (though mostly aluminum) using the stock blade.
.
https://www.homedepot.com/p/Evolution-Power-Tools-10-Amp-7-1-4-in-Multi-Purpose-Chop-Saw-RAGE4/203661791

If I had noticed earlier, I probably would have gotten this version instead:

Consider that a table saw at 4krpm with a 6in blade will cut at well over 6000sfm (most table saws will be higher/faster). Aluminum should be cut at 800ish to 2kish sfm. A table saw is simply too fast. Metal cutting saws spin slower for this reason.

Chop saws have a built-in clamp to hold the material and I can see that being a benefit.

When I researched feeds and speeds with regard to CNC routers, setting an upper limit on sfm made sense. If the sfm is too high it burnishes rather than cuts the aluminum. What is the reasoning for a carbide blade and aluminum?

I find this thread interesting. Our team exclusively uses a standard (wood) chop saw and a table saw for cutting aluminum. Have done it for years without issue. Must use the correct blade, of course, and we have a full operational/safety training program.

Only aluminum (nothing ferrous).

We do cut shaft stock with a bandsaw.

It can be done and it can be done safely with enough training and discipline. Because the speeds are so much higher, when things go wrong, the consequences are likely to be more severe than with equipment designed to cut metal that go slower.

One can get away with this… for a time. Eventually something will go wrong and the results will be worse using high speed wood tools instead of the tools actually designed to cut aluminum and other metals.

I do not know how anyone can justify trying to save a few bucks by not getting the right tools given the increased chances and severity of injury.

I might be prejudiced though - the only time-lost injuries I have ever suffered or witnessed in a shop was from using a wood chop saw (with a metal blade) to cut aluminum and a wood table saw (with a general purposed blade) to cut polycarbonate.

Edit: to be actually helpful instead of just pissy about using the right tools - here is a list of highly rate metal cutting saws to replace their woodworking equivalents.

I and 95 have the DeWalt cold-cut mitre saw and love it, I know many teams have the Evolution RAGE saws and love them. 95 also has a Milwaukee portaband (like the DeWalt portaband listed) and we really like it. I have never used the circular saws listed there, but they strike me as a great replacement for table-saw-cutting of metals because they run at lower speeds and allow you to clamp down the metal your cutting instead of trying to hold onto a sheet metal when it catches a saw blade!

From what I see my builders use is a band saw, it seems to work well. However we have used a table saw for the past several years and it works well but we have had it spit the part back at us several times.