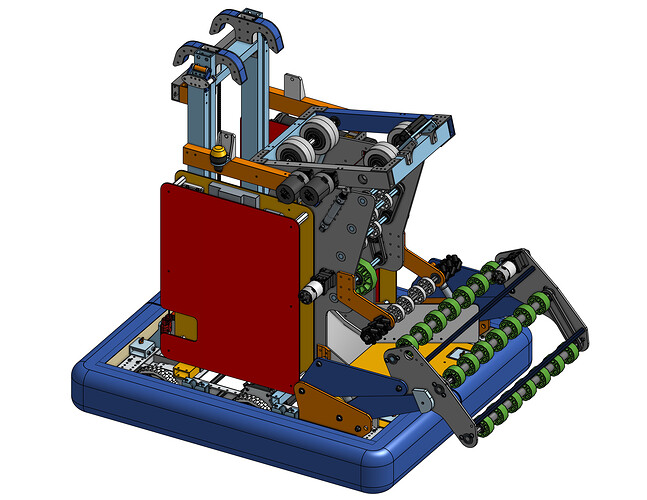 Despite that, I think our team put up a great showing this year. We vastly exceeded our expectations for this year. We were the 2nd seed at Clackamas (semifinalists), finalists at OSF, 8th alliance captain at DCMP, and missed qualifying for worlds by 1 slot and 8 district points. This has been our team’s best season since 2015, and one I’m very proud of.

However, of course, it wasn’t perfect, so here are a few positives and negatives from this season. I’ll focus mostly on the design because that’s what I’m most experienced with.

All in all, I think our team did a great job this year. Despite some issues, we overcame our lack of resources and made a bot we’re all proud of. Everone’s looking forwards to make an even better bot next season.

Adding on to the fabrication of the bot, >80% of the bot was 1/4" polycarb which was very easy to manufacture using our CNC router, our first season with one. It also lead to alot less time going into milling. I would highly recommend polycarb for any team that has a router.

We did 1/4 PC for our shooter/indexer panels because we could get it cut on a CNC router quickly. Had zero issues with the panels (except some accidently loctite contamination!). 1/4"PC is about the same weight as 1/8" aluminum.

Congrats on a great season, especially considering your resource and experience limitations!

I applaud your post-mortem, diligence in these kinds of review processes greatly expedite the self-improvement year over year!