Dark FRC, show me your secrets

On a related note, always swap breakers (PDP and main) when they trip and relegate them to the practice robot. They’ll trip at a lower threshhold each time, exacerbating your problem. I’ve also seen teams just completely swap breakers between finals matches for both that reason and thermals.

Regardless we won runner-up. I have absolutely no clue.

My general understanding of the safety award is that it went to whoever doesn’t completely blow off or avoid the UL reps, which could often be a majority of the teams at a comp.

We developed an extremely dark arts strategy at the start of 2017 that we never implemented.

As a refresher on that game, you only could score rotors by placing gears, and you could only get extra gears by having HPs pull up the lift with a rope. Well, you could have relatively easily designed a robot that year to go over to the opponent’s airship and pull all of their ropes down onto the field. This would have eliminated the possibility of any additional rotor scoring as there would be no way for opponent robots to get gears up to the HPs.

This strategy was later unintentionally invalidated by a re-design of the lift system (adding the pvc ring), but early in the season this dark strategy seemed to be legal, viable, and very powerful. After doing this once or twice on unsuspecting opponents, it may have developed into a tug-of-war between the HPs and the robot. Which obviously would have mandated a rule change as that would clearly be unsafe. That was our main reason for abandoning it.

Really would have liked to see the confused opponent HPs though the first time this happened, they look down and all their ropes are gone, leaving them helpless.

Needless to say, the UL reps were not pleased. “all around us” is apparently not an acceptable response to “Where is your safety captain?”

The safety is what gives the robotics team their power. Safety is a force created by all living things. It surrounds us, penetrates us, binds us together.

In years like 2017 and 2018 where the human player is near their opponents driver station - there hasn’t been a rule against throwing articles of clothing at the opponent’s estop button.

I am guessing they would call something if you tried it though.

In 2016, before Champs, we developed a Cheesecake robot concept to shut down the opponents high goal scoring.

The concept was to climb onto the opponents rung without extending “up”, instead extended “out” in both directions, driving up the wall, hooking the bar, and then pulling itself back up. Once on the rung, you could have two “wings” go out to the sides, thus blocking all three high goals. To avoid late penalties, you’d unhook before the endgame and drive back over to the other side of the field.

Pictures/Video of the mock-up here: https://photos.app.goo.gl/LubyaSxeXMQBcFoJ9

We decided to notify FIRST of this potential loophole before Champs. TU21 included “Opponents RUNGS” in the list of items that you were allowed to interact with, meaning the cheesecake bot would not be allowed to climb our own RUNGS to block the opponent’s shot. We were pleased that FIRST addressed this issue before Champs that year.

Thinking up a concept like this, building and testing it, and then submitting it to FIRST is all incredibly impressive. This kind of ingenuity, validation, and integrity is the reason that 1678 is always on Einstein.

In 2015 we discussed the idea of a giant volleyball net that would prevent the opposing team from throwing pool noodles across the field. It would be tethered to our robot.

In 2017, I proposed the post-auto auto routine. A second before auto was completed, you switch to coast mode and full send your robot towards the opponents side of the field such that you would cross the auto line right right after auto was finished. As soon as teleop start the robot would continue driving the same direction until the driver took over.
If positioned correctly, then would slam your robot into an opposing on, and pile drive them into their drive station, which by far is one of the scariest thing for a driver to experience.

All I can really think of was in 2019 Deep Space with all of the G20 violations being handed out because if you simply touched the inside of a robot (inside the bumpers). However later on this cooled down and defense bots went insane, sure we played a little defense but that was maybe twice out of each competition, when we did we could push the other robots to the other side of the field but we did not play rough with the other alliance like some robots I’ve seen do where their goal was to directly stop the other alliance, sure this may sound like every competition but last year it was bad enough there were posts on this site asking people to calm down with their robot

So here’s the play.

Become a mentor on a robotics team. Once that’s done you need to go to an event with your team. Now this strategy won’t work at all events, but if you are lucky you can pull it off. So if you happen to be at an event that’s got a fully loaded mentor lounge, you can just go up there and chill. It’s awesome. Talk with other mentors, enjoy some goodies the whole 9 yards. Now here’s the slimy part of the tactic. You take some of those goodies out of the lounge with you and enjoy them in front of your students. You know, really make them jealous. Make them wish they hadn’t caused you so much grief throughout the build season with all the oval off center holes they drilled so that you’d consider sharing some goodies with them.

Side note: I’ve looked and I’ve looked and I can’t find the drawer in which these students store the oval drill bits that they’re using to drill all these holes on the robot. And if I ever catch the student that’s been bringing in the off center center punch I’m going to have some pretty heft words to say!

That’s pretty much it. Become a giant slime ball by taunting your students with treats you damn well deserve!

In 2018 we were actively attempting to run what we were calling Operation Colorblind at the CHS DCMP. We were only going to do it if all of the teams on both alliances agreed. The plan was to have the alliances climb the wrong towers at the end of the match.

In 2017 we had a strategy called Operation Sesh. The goal was to slow down opponents by dumping all of the fuel onto the floor. It ended up being useless at slowing teams down, we tried it once at the San Diego Regional.

In 2014, there was a loophole in the rules that made it so the inbounding HP could “bounce” the ball in and right out of the robot (if the robot design made it possible) and get counted for assists. I don’t blame any team for taking advantage of that rule - it’s really smart. But it definitely (IMO) went against the spirit of the 2014 game.

This has happened to me multiple times, and when I call them out on it, they just walk away. I can not stand when teams do this. Completely anti-GP.

An example of dark but not necessarily a good strategy…
In 2015 the rule was to have a max of 6 totes high: 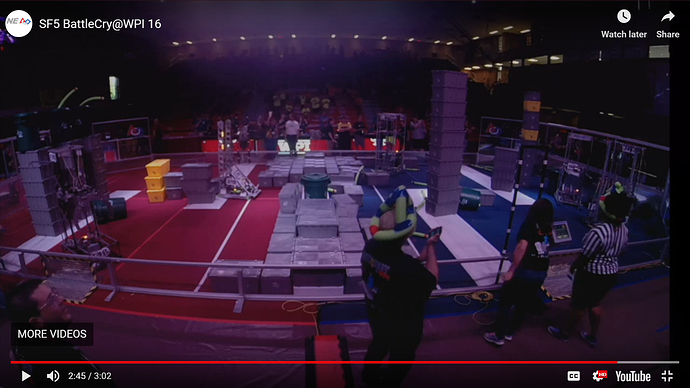 This was at Battle Cry in the semi finals. The Blue alliance lost the match but won the audience.

Would have been funny to see the confused refs and game announcers read to it?

The 0-second can grabber, that extended above but not outside the railing of the field in order to start the match above the cans, would probably fall under this thread topic. No one ever fielded it.

They probably could have instantly carded you for egregious violations of several other rules well before needing to make a new rule. Namely grabbing/grasping with the field, and for using the field to amplify the game challenge.

I don’t recall that year’s rules well enough to adequately defend the legality in 2020.

You could definitely have pulled down the rope without grabbing/grasping it though.

EDIT: Just skimmed the 2017 rules and nothing jumps out at me as being illegal about this.