Dealing with the loss of the assembly mirror

I learned CAD in Solidworks and I did full CAD for our 2020 robot in Solidworks. My team has decided that Onshape is the better option for us, and we would like to use it for the 2022 season and beyond. I’m making this thread looking for specific strategies and tools that can be used to compensate for the loss of certain features I relied on in Solidworks. The biggest of these features is the assembly mirror, which I rely on heavily in Solidworks to speed up the assembly process. I am currently using the replicate tool in Onshape to place all of the parts I would have mirrored, is this the best way? There have also been a few instances where I needed a path length dimension, is there any workaround for path lengths in Onshape? I have found that I can do almost the same things in Onshape as Solidworks but it is usually slower in Onshape, this is partially due to my inexperience, but I would love some advice on working faster in Onshape. I’m sure there are other things that I either forgot about or have yet to realize are missing from Onshape, so any other tips you have for moving to Onshape are appreciated. I would also be interested to learn about some of the bigger advantages of Onshape that I may not be familiar with from Solidworks (featurescripts?).

The biggest of these features is the assembly mirror, which I rely on heavily in Solidworks to speed up the assembly process. I am currently using the replicate tool in Onshape to place all of the parts I would have mirrored, is this the best way?

I find myself also creating far more subassemblies that are essentially just COTS components + shafts in Onshape than I did when I used Creo as my primary software. Kind of annoying still, but at this point it’s just the cost of doing business.

There have also been a few instances where I needed a path length dimension, is there any workaround for path lengths in Onshape?

Not sure there is a good option here. I’ve found myself leaning back to simpler belt runs (the only place I really used path length dimensions to begin with) and tensioners, which doesn’t really feel too restrictive. I hope they add this soon though.

I would also be interested to learn about some of the bigger advantages of Onshape that I may not be familiar with from Solidworks (featurescripts?).

Featurescripts are huge for Onshape. I would take a look at the following threads:

Over the past few days I’ve written a few helpful featurescripts. Currently I have Shaft Generator (Thunderhex, 1/2" hex, 3/8" hex, churro, and churro lite) with up-to-face option Spacer generator (round, 1/2" hex, and 3/8" hex) Fillet face. Lets you choose a face and a perpendicular edge, then fillets all parallel edges connected to that face- one click gusset filleting! Here’s the link. I expect to add more soon- let me know if you have any requests.


(this is Julia’s featurescripts, the bread and butter of speeding up tubes, gussets, shafts, and spacers)

I can also recommend this belt calculator, though I haven’t before. Most of the things that annoyed me about it are now gone.

Hello all, I recently finished the initial version of my Onshape featurescript belt calculator. This is my first ever featurescript project, so I’m excited to be sharing it with the FRC community. https://cad.onshape.com/documents/9cffa92db8b62219498f89af/w/06b332ccabc9d2e0aa0abf88/e/29b8ab37be03b929639dfcd5 You can add the featurescript belt to your toolbar by searching “FRC Belt Calculator” in the add featurescript menu in Onshape. You can also find the document itself, and the accompanying …

The other big one for Onshape is the Lighten featurescript, which automates the tedious parts of creating lightening patterns.

I also did a video that may or may not be useful to you on sketching practices and some of the specifics of doing this in Onshape. Since you have some Solidworks experience a good chunk of the beginning is probably review for you, but there’s also some Onshape-specific stuff in there: 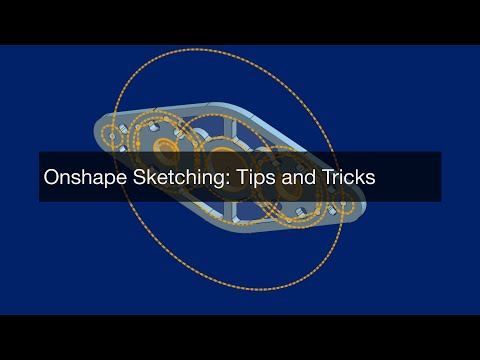 If you haven’t already, I would also recommend setting up MKCAD-- here’s a text explainer:

Here’s the new best way to add MKCad to your tags: Click here to get a list of all MKCad documents Click on the first item, then scroll down to the end and shift-click on the last one Right-click then click “Labels…” Either create a new label and call it MKCad or check the MKCad box to add it to your existing MKCad label We’re still waiting for a way to link to folders or share tags, but until then this is the easiest way.

Otherwise I have a video for that too if you’d prefer (it also covers adding featurescripts, it’s more targeted at someone just getting set up): 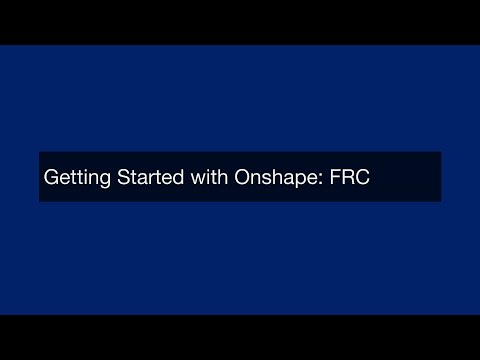 Best of luck on your journey of learning Onshape!

Nick knows what he’s talking about. Just to expand on the point, if you’re going to mirror something (like say a drivetrain) if you do a part studio or assembly of the thing that’s being mirrored, you can be clever about it to get something similar to a mirrored assembly, but limited in capability.

Similarly, the replicate tool can be a huge time saver. I’m not sure if it was Nick or @marcusbernstein that introduced me to it, and I’m still not good at using it, but when I remember I usually am amazed at what it can do. I think I watched Marcus make a base in like 5 min between a couple of featurescripts and the replicate tool.

There have also been a few instances where I needed a path length dimension, is there any workaround for path lengths in Onshape?

I’ve only had to do something like this once, but ended up doing guess-and-check by measuring the length of the path overall as I modified dimensions. Harder for many-input paths but workable if you’re placing a single tensioner. Believe it or on this is my most requested script, but is basically impossible to do in any capacity with the available API.

May I suggest grief counseling?

I’ll probably need it during the next CADathon when its taking me forever to something I used to be able to do in a few minutes.
That is if I actually do it in Onshape like I tell myself I will

If you spam the shortcuts for copy and paste enough times (cmd C/cmd V on Mac and crtl C/ctrl V on Windows), you will unlock a list of hidden Onshape features:

Don’t tell anyone from Onshape HQ that you heard this from me but I’m glad to help you out.

I’d say onshape has a few large advantages over SolidWorks, but most are not actually modeling related, like you might expect. It also falls behind SolidWorks in a few regards, mostly because of its new nature and the fact that it doesn’t run locally.

With that said, here are a few tips for maximizing efficiency in the software:
Onshape assemblies can be much quicker, mostly due to replicate, MKCAD, easy configurations, live collaboration, and mate functionality (mates are way different than SW). Get practice with these things, and you’ll find you’re able to make complex assemblies in far less time.
I’d also suggest you practice multi-part part studios, you could theoretically make parts for an entire assembly within a single part studio using this functionality. I’ve made entire mechanisms and subsystems In single part studios. This doesn’t work with cots parts inherently, but works great when making systems of new/custom parts.
Also, practice in context editing, this is the cad equivalent of spot drilling, and allows for a lot of quick edits and easy changes is done well. SW has this capability as well, but I personally like onshape’s method a little better.

With regards to non-modeling stuff (where onshape excels the most):
Get good at in document file management (folders, naming, etc.), this is onshape’s biggest strength, imo, especially over SolidWorks and other localized cad softwares.
Also, and this is especially useful for robotics, get a good handle on the collaboration features, such as teams, sharing, following, etc. This is invaluable, especially for a design lead, where collaboration and collaborative design are super important.

As an aside, I’d say onshape is the future of cad, but not really the present, it’s too new and too limited to be super viable commercially. That doesn’t stop it from being nearly perfect for student robotics, though. Personally, onshape has been huge for our team (we used a combo of inventor and grabcad before). We’ve massively increased our ability to design quickly, and to collaborate. Onshape has also helped us teach new members much more effectively, and has broadened our scope as far as hardware goes (runs on school chromebooks).

TL;DR: You’re experienced with cad, so the modeling stuff should come quickly, just get practice with the more productivity/collaboration features, and you’ll see a huge benefit to your team workflow overall. I hope something here was able to help, and good luck!

Onshapes mating workflow is so fast, I don’t find myself missing assembly mirror. For the more tedious parts, like shaft bearings and bolts, onshapes replicate tool is a massive time saver. I wouldn’t worry about it being much slower that the workflow of solidworks, all things included.

I wouldn’t worry about it being much slower that the workflow of solidworks, all things included.

I think this is a big thing. Onshape is still lacking in some areas, but its fundamental modelling and assembly workflow is excellent, especially when combined with the suite of FRC-specific Featurescripts and the robust community-maintained parts library.