Defending a climb is not punished?

Yesterday I was watching Los Angles North Regional and I noticed that during QF 1-2 it looked like 359 tried to stop 1678 from climbing. While watching I thought they might be punished by C8C1(or something else to stop this exploit) but that wasn’t called as shown in the final score.

When the score was finally revealed it was shown that the score had red with 25 climb points and 15 blue penalty.

I understand that this match wasn’t a close one. For closer matches are there going to be more penalties for a team that intentionally stops a climb, or is defending a climb a legitimate strategy/exploit in the rules?

Our head coach and I were talking about this exact thing right after it happened. Currently, somehow, this is legal. They must change the rules to award a climb because this strategy WILL break robots. Now that one team showed the flaw in the rules during a final, everyone will follow suit. The rules need to be updated. I’m not criticizing the team that executed the maneuver, which they did without damaging the other robots. They took advantage of the how the rules are written to help their alliance as they should. FIRST needs to change the rules to prevent unintentional damage to team robots. Nothing ruins Gracious Professionalism as much as another team damaging your robot and preventing you from competing.

This is actually a very good point that you bring up. According to G14:

G14. During the ENDGAME, don’t touch ROBOTS in their RENDEZVOUS POINT. During the
ENDGAME, a ROBOT may not contact, either directly or transitively through a POWER CELL, an
opponent ROBOT whose BUMPERS are completely contained in its RENDEZVOUS POINT and not
in contact with its GENERATOR SWITCH.
Violation: TECH FOUL

So it would be viable to take a Tech foul for preventing a Climb. However, this will likely generate C1 violations:

C1. Egregious or exceptional violations. Egregious behavior beyond what is listed in the rules or
repeated violations of any rule or procedure during the event is prohibited.
In addition to rule violations explicitly listed in this manual and witnessed by a REFEREE, the Head
REFEREE may assign a YELLOW or RED CARD for egregious ROBOT actions or team member
behavior at any time during the event. This includes violations of the event rules found on the FIRST®
Robotics Competition Event Experience web page
Please see YELLOW and RED CARDS for additional detail.
Violation: The Head REFEREE may assign a YELLOW or a RED CARD.

So you might be able to get away with this for one match at early events, but head refs should be aware of this strategy and see it as a C1 violation.

A bigger issue that I see is that there is no penalty for contacting an opposing robot that is partially in their Rendezvous Point.

This means that as the rules stand right now, a team can park in their opponent’s Rendezvous Point and prevent them from entering. As long as the defending team doesn’t allow their opponents to completely enter their Rendezvous Point (bumpers and all), they can prevent hangs. You would have to be careful of this situation, but it is a perfectly legal strategy that I hope gets corrected in a Team Update.

After watching the video again it looks like 359 was trying to defend a climb without going into the red rendezvous zone but then 973 pushed them in because they went for the climb. It could be argued that because of that 359 only deserved a tech foul and not 25 points for red because of that. But once in the zone 359 still pushed 1678 out of the way. As a driver I know when getting pushed into protected zones you do whatever you can to get out as quick as possible, even if that means bumping a few robots. However, the push looked very intentional.

Maybe the refs took that into account when deciding the final score. It would be cool if we could hear from anyone on the drive team from any of those alliances and if that was something being talked about.

I’d be interested to see if this happened at any other regional this weekend.

To the OP, this isn’t exactly what happened.
Our team tried to block both robots from entering the rendezvous from outside the rendezvous point. We were pushed in by both 973 and 1678 into the zone sideways.
At that point, we tried to prevent 1678 from climbing while trying to get out of the zone.
The 15 point penalty wasn’t because of this.
It was because we accidentally touched 973 who had already climbed, while reversing at one point since the spacing was tight.
The reason why we did this was because in the previous match, 5818 essentially did the same thing, while a robot was already entering the zone. Ultimately, the 7th seed was able to beat 4414’s alliance in the first match as a result of affecting the climbs.
During the qualifications earlier in the event, as we set up to climb, we were whacked by the opposing alliance which pushed us slightly out of the zone.
As of right now, I can honestly say that I am confused about a ton of situations around the zone.
But that’s not my biggest concern. I’ll save that for another thread, which concerns how robots/alliances can receive tech fouls or red cards which is contrary to what was done prior in past years.

This is exactly the point. It sounds like you did everything in good faith to adhere to the rules and more importantly not hurt a defenseless hanging robot. You did this by trying to stay out of the zone. The problem is in the inevitable execution. Because 1678 wanted to hang so badly, you were involuntarily pushed into the place you didn’t want to be and tried to get out of it which cause you to lightly tap the hanging robot. Credit where credit it due, when your drivers saw this they stopped immediately. What if a team with less experienced drivers try to execute this maneuver and freak out and go the wrong way breaking the hanging robot.

Also, the fact you saw another team try is exactly the point. This must be a yellow card any time is happens. I really feel the rule should be saw, “if an opponent ROBOT whose BUMPERS are breaking the vertical plane in its RENDEZVOUS POINT.”

By the way you guys looked incredible. The wife and I were watching and were on the edge of our seats for all the final matches.

Team 359, please don’t think anyone is criticizing you or your team, we are not. You were definitely pushed into the situation and it can be argued that they were trying to draw a foul but the hole in the rule was highlighted and strategies will alter because of it. You guys did very well and worked with the hand you were dealt.

It was because we accidentally touched 973 who had already climbed, while reversing at one point since the spacing was tight.

In terms of conduct role violations, I do not think C8 applies in this case as 973 did push 359 into their rendezvous point, but 359 had some opportunity to get out of there, but was more focused on stopping 1678 from climbing. C1 is a valid argument if head refs view this as an exploitable strategy and they decide to assign yellow cards, but I’d rather see FIRST address this.

This strategy is simply accepting the tech foul so that the opposite alliance does not get the 25 points for climbing.

I played the clip back at .25 speed and normal speed I feel pretty confident that there was contact. I was not there nor can i 100% decree there was, but 973 sure looks like they got nudged.

But, the point is the next team that tries this might not be so careful. I do not think any team will try to actively hurt any robot at all under any circumstances. But, I want to make sure that as a community we do not highlight strategies that would put teams in positions that breaking robots becomes more likely.

Our team will not try this strategy, because I will not put my students in a position where they could cripple another robot. That would devastate them. As of right now, my plan is blocking to the zone is ok, but if our bumper breaks the plane, we need to abandon and go park. Even that, seems too close for comfort for me. They would feel terrible if they a robot was damaged due to a mistake in the last 15 seconds of a match.

I’m not saying breaking robots doesn’t happen, I’m sure we will see a ton of unintended intake mechanisms that break or bend this year. But I feel this strategy has a higher risk of damage. 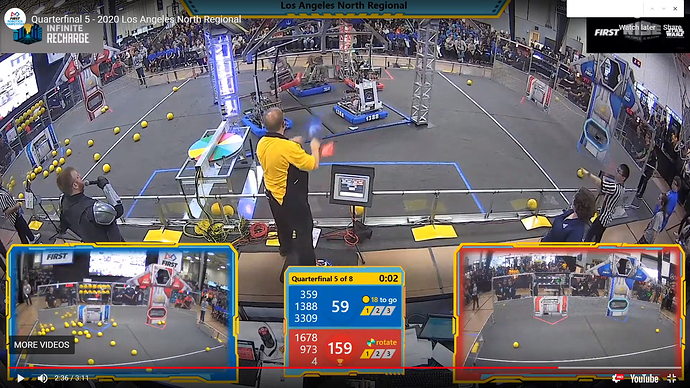 Oh no not at all, we are all good.
I was trying to clarify.
So I just received a message about this. It was a G14 for 1678. The reason I thought it was for touching 973 was because the flag came out late right after we appeared to touch 973.
This is what I saw from driver station 1.

Yeah I understand, but the head ref called a tech foul there, which G14 carries a tech, while G15 does not. 359 obviously deserved that tech foul, but they should have attempted to exit the red rendezvous point, instead of staying there to block 1678.

Totally agree, but I think were trapped and might not have wanted to risk damaging 973 on their way out. Maybe, not but they definitely tried to keep their distance from 973. My problem is will all teams show this much restraint in high adrenaline situations.

The Penalty for touching a robot who is climbing should be so severe that no one will ever risk being pushed into the zone and moving. Even a yellow card will do it.

Well that looks safer and fine by me. Except blue should have been called on pinning.

The risk is getting penalties, lots of them.

This is where the rule exploit comes in. I don’t think you guys did anything wrong, maybe you could have exited the rendezvous zone without pushing 1678 out of the way, but in the heat of the moment you stopped 1678 from climbing while trying to exit the zone, which is definitely better than damaging 973 but didn’t go completely unpunished.

Yes, there’s risk in it, but because of what happened that match, the score difference decreased by 10 points.

I think this could be purposefully exploited at later events if it isn’t fixed.

That should absolutely be a pinning call on blue.

The same thing happened to our team at PCH

Exactly @retrodaredevil, this will alter strategies to copy it, even if it was unintentional in this case.