Didn’t see this thread yet. Will defense play a powerful role in how the game is played like last year during Deep Space? There are not a lot of protected zones and the scoring can take quite a lot of precision.

here are not a lot of protected zones and the scoring can take quite a lot of precision.

There are quite a few protected zones, namely the trench and the right in front of your goal. And unless you’re aiming for the inner target, the outer hexagon is quite large.

I personally expect defence to be just as much about hurling powercells to the far side of the field as it is about keeping shooters out of position.

Short answer, yes. How intense will it be, we’ll see. A two bot defense is allowed, so in theory 254 could shoot while two boys played insane defense.

do you see the trench being a common place for people to score from?

There is no limit on the number of Defenders and only three protected zones before endgame. I predict a lot of Defense this season from Week 1 on.

Teams that build high will find themselves under a significant amount more defense if defense is played smartly, because it seems as if the shield generator is one big choke point.

hurling powercells to the far side of the field

Careful with your wording; this sounds dangerously similar to the language describing cross-court shooting, which is illegal this season.

Yes. Of course shooting from entirely inside your sector to the other sector is illegal. There are ways to circumvent this, such as partially exiting your sector, or shooting the powercells into the guardrail near your control panel

It was the intent of the action, namely getting powercells from your side of the field to an area where your alliance can score, that I was talking about.

We did some fake match play today and this was the general idea of the defense. Granted, we likely aren’t focusing on defense so we didn’t give it too much time to evolve, but shooting power cells to your teammates from close to the goal generally felt like a valuable task.

It appears to be flying under radar (I don’t see any posts about it) but there was a nerf to defense this year as compared to last year.

2020 game manual:
G21. There’s a 5-count on pins. ROBOTS may not PIN an opponent’s ROBOT for more than five (5)
seconds. A ROBOT is PINNING if it is preventing the movement of an opponent ROBOT by contact,
either direct or transitive (such as against a FIELD element). A ROBOT is considered PINNED until
the ROBOTS have separated by at least six feet from each other or from where the PIN initiated,
whichever comes first. The PINNING ROBOT(S) must then wait for at least three (3) seconds before attempting to PIN the same ROBOT again.

The requirements for a pin to be completed this year are all on the offending robot.

We, at 1983 Skunk Works, have been considering a possible defensive scenario. 1st, there is no limit on how many robots can “defend” this year. So, the following can be used. You are defending against an offense-minded alliance. There are 20 cells on the floor, five in their trench and six in their loading dock. They shoot all those plus the 9 they were loaded with in. You keep the maximum in your rack of 15, another 15 in your 3 alliance partners and the rest … place in your trench where they can’t get them. Now they are starved for power cells.

they can still grab from the trench. just cant hit you in there

A good shooter can probably outdo any defense bots.

If your bumpers are at all in the trench, the other alliance gets a foul if they so much as touch you. If you can fire from the end of the trench closest to the scoring area, it’ll be impossible for a defense bot to block you: with the max height limit, if a shooter is high enough or shooting from the back of your robot, they can’t do much without hitting you (and giving you free points).
Same goes for the triangular areas directly in front of the load and goal- the same strategy could be used in front of the goal.

This means that the trench could be key for a lot of games.

… place in your trench where they can’t get them

Well, they can get them… but if your robot is in the trench, they’ll eat fouls if they try.

However, this would be a textbook G22: “Two or more ROBOTS that appear to a REFEREE to be working together may not isolate or close off any major component of MATCH play.” Case “d” in the blue box: “shutting down access to all POWER CELLS on the FIELD.”

If your bumpers are at all in the trench, the other alliance gets a foul if they so much as touch you.

Not quite. Rules G10 and G11 are slightly different, and this is going to cause a lot of confusion (for referees as well as players!). G10 applies to all three “safe zones”: a robot whose bumpers are in the wrong-color one of these will draw a foul when a robot of the proper color contacts them (regardless of whether the proper-color robot is in the zone or not). G11 only applies to the target zone and loading zone, but NOT to the trench: a matching-color robot whose bumpers intersect the zone can’t be contacted at all. So, a robot straddling the end of their own trench CAN be safely bumped, as long as the bumping robot is careful not to cross the line into the trench.

Then you just have to back up into the trench a bit further to shoot.
Again, this relies on a good shooter- I assume a foot or two won’t throw your accuracy off by a whole ton. The fact that the trench can act as a safe zone means you can just shoot over defense bots (since they can’t extend higher than the starting height limit until the end).
Edit: thank you for the rules clarification, though

I figured I would add onto this thread rather than create a new one. Inspired by the field divisions created by @Caleb_Sykes in part 2 of his blog post I took a swing at slicing up the field (in paint, nothing fancy) to try and get an idea of smaller regions of the field. Specifically I wanted to try and identify zones where offense and defense are likely to frequent. While I know that the original effort was based off the Zebra Data I think there is still some merit in chopping up the field for strategy reasons. This was my first swing, though the more I look at it, the more I want to subdivide. (Number for each zone is arbitrary) 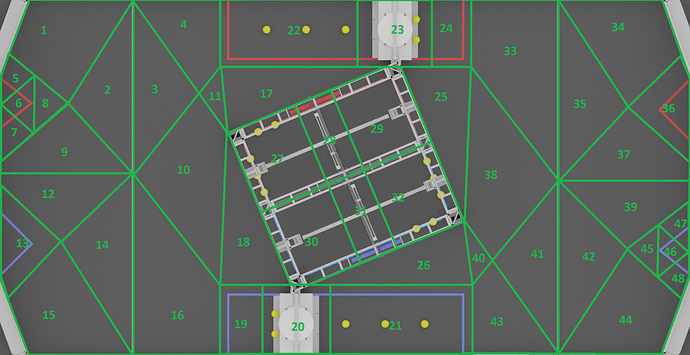 While I don’t see too many persistent choke points similar to the cargo ship / rocket last year, I think there may be some dynamic ones where a defender on the correct side of the field has the upper hand once they know what path an the opponent is taking and where they prefer to shoot from. It is also hard for scorers to change paths once they choose trench or center, best case they can swerve over at the halfway point. (I’m excited to see if the data shows cruising velocity changes this year in the center vs more open flat ground but that might take some extra number crunching)

It is also interesting to note that any direct left/right line through the center of the field is hitting 2-4 of those bumps at some pretty strange angles and changing path in there might be a little slower than a defense bot guarding 11 and 18 giving enough time to react.

Has anyone else done some similar field divisions for this year when looking at defense or other?

Wondering if defense in the last 5 seconds or so before the end game, and during the end game, to prevent climbs will become important. A bot that cannot climb would seem to be ahead by playing defense for as long as possible rather going to park. It could be prevent a hang or disrupt the timing for a planned balance. Would have to be careful to avoid penalty.