Design of a electronics panel

In the last off-season, our team had many problems involving electronics, mostly involving the radio 12v connector into VRM. During the build weeks, we didn’t think about the wiring, which probably affected our results in general.
By the way, our electronics subteam had an idea to resolve this problem: build an electronic panel, indicating all connectors, like this: 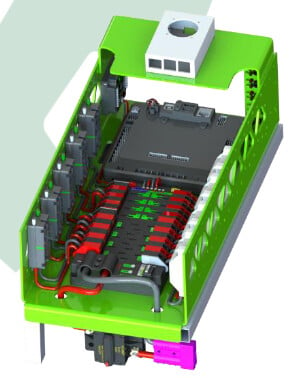 I’ve seen some examples here on the forum, but I don’t know where to start. We’ll build the panel, based on this image above (6404’s electronics panel), but with some adjustments.
So, taking advantage of that my team will build yet, do you guys have examples of electronic panels? (simple, but effective).

Here, we are thinking to prototype the panel first with cardboard, before manufacturing.

I do want to mention, if your team incoprates Falcon 500’s for your robot, that will save some space on your electronics panel

yeah
We thought about this possibility, but Falcon is out of stock here

Likely to restock in November or December, suppliers restock just before kick off

Honestly, that panel is probably way overkill for what you are trying to do.

If I were you, I’d start simple. Get yourself a sheet of this stuff (or make your own if you have the tools):

Clear polycarbonate perforated sheet. Useful in many applications, with the original design intent is to act as a floor for the chassis of a robot.Perfect for helping mount nearly anything quickly with cable ties, or use for cable...

Lay out the required components. You’ll have to decide where you want your motor controllers. Our team will generally put them near the mechanism. Other teams put them on the main control board. Up to you. Give yourself plenty of space to work with - don’t aim for super compact. Use plenty of zip ties, and make sure your wires aren’t too tight on the board. And most importantly - take your time.

Another big thing: use good connectors and don’t compromise on your electrical system. Anderson Power poles are fantastic. I’d stay away from automotive crimp connectors.

For CAN bus, your team may already has a standard, but if not there are several tricks. Some teams just solder the wires, and use heat shrink. Some teams use the PWM 3 pin connectors with latches. Our team has a high end Molex SL crimper, and uses those, which is great, but expensive.

All the connectors in your VRM should have ferrules.

CTRE has what you need for Ferrules and Anderson Connectors for motors. They also have good crimpers for both (the ones we use). There are plenty of other places to buy them, like Amazon and digikey, but CTRE is pretty competitive, especially if you order enough for free shipping.

Also, based on other responses, falcons wire in really nice, but aren’t a silver bullet. Also, teams have been successfully using other motor controllers for years.

I read in these last few days about this problem

Availibility; Where to find NEOs and Falcons Technical Discussion

From what their sites say and what I’ve heard, the suppliers (vex, wcp, rev, etc) typically start restocking around November/December. My team is in the exact same boat upgrade-wise.

But the problem is more than that. We received great money to spend on our robot, but we need to spend it until final of October, and I don’t know when the Brazilian supplier will receive new units of Falcon 500. Anyway, we had to choose NEO as a substitute for Falcon.

Honestly, that panel is probably way overkill for what you are trying to do.

[6404_Robot_Flyer] BS-05 is a rework rework of our 2020 robot BS-04, based on the same general architeture, but with a different shooting position, instead of shooting from the trench run, BS-05 shoots from the target zone allowing for a simpler shooter and faster cicles CAD:

For CAN bus, your team may already has a standard, but if not there are several tricks. Some teams just solder the wires, and use heat shrink. Some teams use the PWM 3 pin connectors with latches. Our team has a high end Molex SL crimper, and uses those, which is great, but expensive.

CAN connectors always have problems every season too. Our team uses VictorSPX for 80% of motor controllers, and the 3 pins female connectors from the majority are broken.

So you have to spend it before the end of October? This might be an option.

Unfortunately, we can’t spend anything that the price is directly in US dollars, only in Brazil’s official supplier of AndyMark.
But thanks for the tip

Is stemOS the supplier?
The overall timing of your grant money is bad, as most of the FRC suppliers tend to start restocking around November. This situation just really sucks for you guys, and I hope that you find a good way out of it.

Give some thought into the type of wire being used. Some of the bends in the wire won’t really stay or want to bend that sharpe you’ll have to use silicone 12 gauge wire and epdm welding wire for the 6 gauge (can’t find 6 awg with silicone insulation and epdm is the most flexible readily available) these types of wire are more expensive but are way nicer to work with on the robot.

In the last off-season, our team had many problems involving electronics, mostly involving the radio 12v connector into VRM

Did your team ever determine the root cause of your problems? Do you have any photos of the electronics panel that you were having problems with? Why do you think building your electronics into a box like the one shown will fix the problems you were having?

If your team was having problems with properly terminating wires in connectors, how would a structure like what you have shown improve the quality of the wire terminations? Did you have someone who deals with wiring on a professional basis teach you how you should be stripping the wires, how to prepare them for being inserted into a connector and how to insert them into the connectors?

I think that the wires and connectors are more organized. Maybe it isn’t necessary to build specific and compact panel electronics (like I showed in the picture), so this project is a good start to a robot in the future with more reliable electronics, a point that our team used to ignore.

Anyway, we had to choose NEO as a substitute for Falcon.

Which is a fine solution, the Neo is a great motor too (we use Neos on my team). However you should be aware that with Neos, you really want each SparkMax controller to be close enough to its motor to connect directly to the motor encoder cable. Extending them is possible if you must, but complex (you need this plus this plus extending the 3 power lines into the motor) and the resulting arrangement is relatively less robust - multiple connection points with small JST connectors on them, plus a fairly exposed ribbon cable. For this reason I would strongly suggest not trying to put all your SparkMax’s into a box next to the PDP/PDH like you’ve shown. Ours are distributed around the robot.

It isn’t. Making your electrical system reliable has more to do with learning and consistently following good technique. As I tell my students: there are hundreds of electrical connections in an average robot, and a failure of any one of them is likely to result in a lost match. I would recommend focusing on the basics:

Those things alone will make your wiring a lot more reliable.

Also consider that from a system design perspective, having to design in a relatively large electronics enclosure vs. tucking specific smaller elements in near mechanisms or where there is space may be much harder when you’re building your next robot.

Unless your team changes how it terminates wires, you will not see any improvement in reliability. You have to find the root cause of the problem and fix it for the problem to go away.

Are your team members doing a gentle pull test after making each and every connection? Are your team members asking someone who is thorough and meticulous check after a batch of connections are made? Is your team having an adult mentor do a last check on all the wiring afterward? That is the process we used on my younger son’s team to reduce electrical failures to zero throughout the whole season. This process was borrowed from my employer at the time, a large multi-national company that manufactured high-reliability electronic equipment for industrial applications.

It is my opinion from designing electronic equipment for almost 40 years that the new panel you showed is likely to make your control system less reliable than it is now. The reasons are it is far too cramped to allow one to have sufficient access to do the assembly work, it is far too cramped to allow one to do any quality control checks and it is far too cramped to allow any modifications or repair work to be done easily. For instance, a tool must be inserted into the PDP to open the spring clamp to allow the wire to be inserted. Can you imagine being able to insert the tool and hold the wire at the same time? It appears that the motor controllers on the right side are the older REV SPARK with the screw terminals. Is there sufficient space to get access to all four screw terminals on each SPARK? Do you really have sufficient access to insert connectors into the USB and Ethernet ports of the Roborio? Do you have sufficient space to insert connectors along the sides of the Roborio and is there space reserved to secure the wires for strain relief? Lastly, the two large power wires may not have sufficient bend radius (usually 3x overall diameter is required as a minimum to prevent damage).