For the last CADathon, I designed a shifting differential elevator (inspired by one of team 971’s spartan series presentations) to both knock the 24" balls off the truss and lift the kicker mechanism, and climb in the endgame, and I figured I’d release the CAD here.

The elevator works by having each cable run terminate in a drum (connected to a virtual four-bar), rigged such that when both motors move opposite to eachother, the drum on the carraige is locked in place, and so the elevator moves up and down, but when they rotate the same direction, the wrist moves, knocking the ball off the truss. 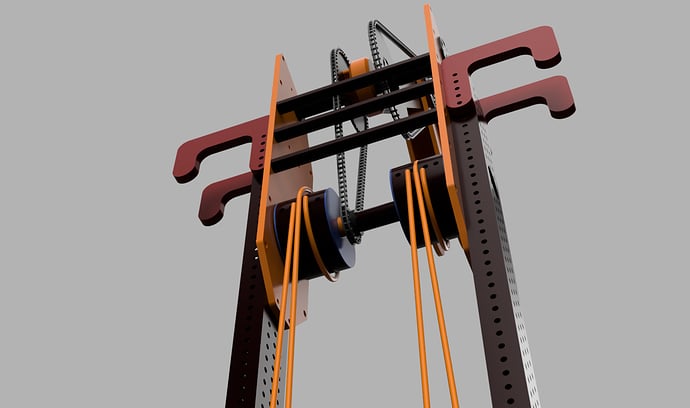 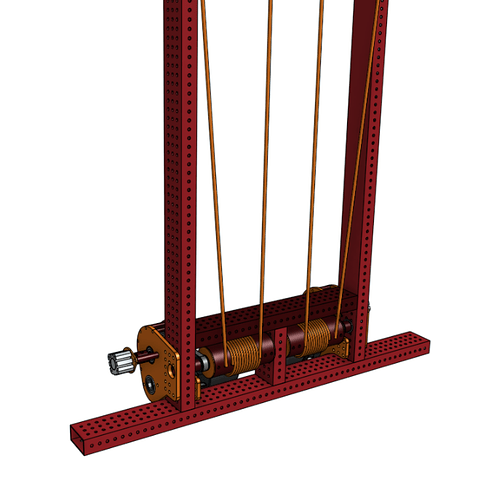 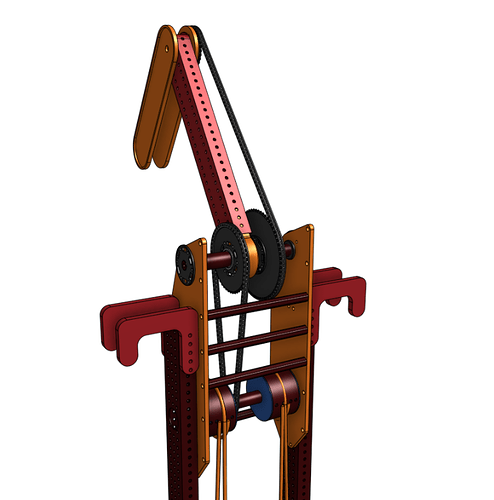 This was an absolute blast to design – feel free pm me if you have any questions!

Out of curiosity… what sparatan series presentation inspired this?

I believe it was the one about iteration, where they mentioned the concept of a differential elevator

After watching that presentation and now seeing your design (which seems more like what “differential” means), I still have no idea what a “differential elevator” is.

Check out this infographic from FTC team 9881 who built a similar design in season: 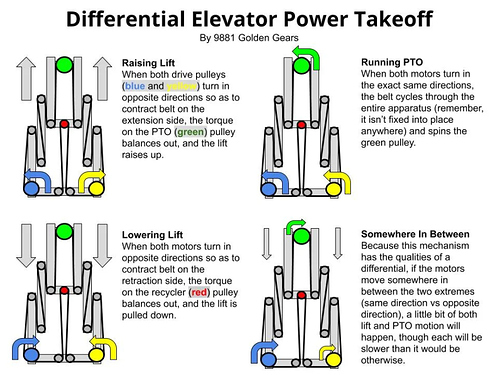 So, no disrespect to 971, but I’m pretty sure they just had their terminology wrong. What @dydx posted is a differential elevator. My takeaway from the 971 presentation is that they were talking generically about elevators with a pass-through (IE: ambidextrous, front-to-back, or whatever else you want to call it).

Clarification by @BJC below. Thanks!

Maybe a render that shows the whole system would help clarify it.

I think to take full advantage of this system you would need both arm and elevator to be pretty well counter balanced. Even in that situation it would be odd to control because moving one actuation then the other will be faster than moving both simultaneously.

If the green thing in that diagram is a skywalker wheel, you can use this concept to drive a skywalker with your climb motors (assuming you have a climb system that uses a similar cascade elevator driven by two motors).

We had contemplated something like this for 2020 with our spring extend telescoping lift, but did not implement it in our final design. With the telescoping lift, you do not need the red recycler pulley, but the total travel available to you in skywalker mode is limited by how much rope you put on each spool initially. We will see if this idea comes back into the picture for 2021.

You’re right about the rigging on the upper spool – I should have wrapped the “pull-down” run around the spool the other way, though theoretically it would wrap itself around as the spool rotated. Re: The angles, I’ve highlighted the “Pull-up” and “Pull-down” runs in pink and green respectively – I hope this clarifies it a bit.

Finally, with regards to controllability, I think it would be fine without counter-balancing, since you could have feedforwards on both motors to compensate (a standard elevator feedforward that increases as you have to lift more stages combined with a cosine feedforward for the arm should work) – the challenge would be dealing with the slop in the rigging (even with tensioners), and dealing with the fact that a system like this would be extremely sensitive to changes in velocity.

If you rig it the way the diagram shows with one continuous belt or cable, you should be able to translate across the bar infinitely (I believe).

Yeah – the reason I chose to go with rope was because of the packaging constraints that barred me from having the drums and spools on the same plane, but otherwise continuous belt is probably the move

In 2019, 971 did seriously consider a single-stage differential elevator that used two motors to power the lift/wrist differentially.

Ultimately, we went with the more standard double stage elevator style to reach the highest level of the rocket and didn’t want to deal with the added complexity of the differential on two stages when we could just put a 775 on the carriage. (There was already enough risk on the robot and we wanted to keep focus on making the suction-based manipulator successful.)

With the advent of brushless motors, my suspicion is that differentially powering an elevator (or any other mechanism combo) will almost never be a serious competitive advantage when balanced against putting that effort into other things that more directly contribute to scoring points - kind of a bummer since it’s such a nifty bit of engineering. If frc ever significantly restricts motors/power, this would definitely be a direction to look at though.

Yes, I agree. If you rig it the way that it is shown in that diagram, you would be able to sky-walk indefinitely.

Our telescoping arm design does not use the cascade approach to the ropes. We have a single “pull down” rope and use springs to extend the arm. So, with our design we were planning on just wrapping a bunch of extra rope around the spool at the beginning of the match so that we would have enough length to translate (feeding out on one side while spooling in on the other). It would not be infinite, but as long as we were diligent about re-setting the spools so that they were even each match, it would be easy to translate along the full length of the bar.

True, but when you are up against the PDP slot limit the way us swerve teams always tend to be, having creative ways to add another DOF to the robot using the motors you already have can be useful. As I explained in my example, we could use our 2 lift mechanism motors to also have a skywalker mechanism without adding a motor or any significant weight to a spring extend telescoping arm. I could argue that we probably could lift with one motor instead of two and then have the free PDP slot for a skywalker, but then we would have to change the gearing which would slow our climb. Plus we would probably need stronger linear springs to extend the arms given the extra weight on the top. so, all in all, using a differential system was considered to be a good option if we wanted the skywalker.

Ya, I hear you. If you have two motors on your elevator, it’s nice to be able to use those motors to also power the elevator wrist.

Fundamentally, we’re talking about using two motors to power two different degrees of freedom - a differential slaves these motors together, but it doesn’t reduce the total number required. What I was trying to communicate was that doubling up on motors for one mechanism is less mandatory because each motor can now provide so much power. If you can design/build competitive mechanisms powered by only one motor, than the differential doubling up on power is redundant/unnecessary.

Lets say we both build robots with elevators + wrists. I put a falcon on the elevator, and separately a falcon on the wrist. Maybe I spend extra time to make my elevator + wrist + manipulator really light weight (improving the power/weight ratio on the side everyone seems to forget about). Ultimately, this combo should have enough power to move the manipulator anywhere in it’s range of motion within 0.75sec (or whatever fast made up number). Even if you have designed a differential elevator with two falcons manipulating the elevator + wrist, your power advantage is only going to marginally improve your manipulating speed/maybe start to approach a controllability limit and you have incurred additional complexity/design/software/maintenance risk.

Maybe an aside, but the longer I’ve been in frc, the more I’ve come to value reliability in a robot. (This hit me hard back in 2013 when the 33 robot was having issues/died on Einstein.) If you have a mechanism that fails in a single match, that can often be enough to cost you the match/top 8 spots, an elimination run etc. Conversely, having a robot that’s mostly maintenance free is worth an unquantifiable amount (I recall instances during the round robin where you only have time to change the battery, then have to get back on the field.) That’s why I want to be supremely confident in the reliability/controllability of any novel/especially complex mechanism before putting it on the field. These types of mechanisms require so much prototyping/design/testing bandwidth that my personal preference is to (1) minimize these to 0-2 per robot and (2) only execute on them when they will create some kind of significant competitive advantage. 971 only considered the single stage differential elevator because we were confident that we could design/build it with basically no risk (double timing belt loops, one terminates on the carriage, one around a pulley on the wrist.) Once we started talking two stages, we were really concerned about the long cable lengths and general controllability.

Sounds right to me, but that’s the same risk as any kind of elevator. A reasonable current limit will prevent this from happening.

Love it when people start debating whether an idea was worth designing something or not. Unless it’s particularly useless and uninteresting, it just feels weird to start arguing about whether someone should have bothered to try it. This is a neat concept with maybe some applications beyond what’s shown in the original design, and I’m glad someone decided to try their hand at putting it in 3D.

90% of the time a team would be best served by buying a couple Greyt mechanisms than bothering with designing and making something on their own. Doesn’t mean people should go on CD in the off-season and start demeaning any custom arm, elevator, turret, or swerve drive.