What long shot strat are you referring to?

In a couple of practice matches so far, they took their bot over the rendezvous zone and started shooting from the control panel

They’re not the only team I’ve seen going for far shots. At Granite State, 501 shoots from behind the Control Panel, and 5687 shoots from the opposing Initiation Line. They’re ranked 4 and 9 out of 40 respectively right now with the 3rd and 6th highest Power Cell scores, so it seems to be working out fairly well for them.

where can i fine LAN practice matches?

I haven’t had the chance to watch a ton of matches, but here at Kettering, both 27 and 2337 were shooting over the control panel at points. It seems to be more of a tall robot strategy, I’m guessing since it’s harder to sprint across the field as a tall bot, their strategy is most likely to just make farther shots to compensate.

Early on yes. As the event rolls on and the balls get beat up, no.

973 can make long shots fairly quickly with beat up balls.

I sure hope so, that’s our strategy too.

It may or may not. Just watching the practice stream it looked like their accuracy was fairly poor in the beginning, but it picked up towards the end of the day. I’m still convinced a fast infield cycler would be a more effective contributor of points, especially at a week 1 event.

I sure hope so, that’s our str… Damn, @footie beat me to it.

That was originally our strategy as well, but we found that the balls quickly got cuts and tears that made it less than efficient. Even small cuts (<1”) greatly affect how the balls compress, and therefore how much force you can put on them. With the random mix of fresh and worn balls on the field, it’s extremely hard to tune a shooter to make both shots from that distance. I know 1690 had the same problem when they tried shooting from being the control panel and decided to abandon the strategy (@Korny).

I would not be surprised to see that some of the top teams in the world have been able to overcome this challenge. 973 is certainly one if those teams. But I don’t think it will be a viable strategy for the majority of teams who decided to use that strategy.

Exactly once power cells started to really wear out, it was practically impossible for us to score from there. It could be that with different compression you can get better results, but for us it was more viable just getting closer

Perhaps a non-wheeled launch mechanism would work better for this strategy, as it is less reliant on the ball condition for shot repeatability. 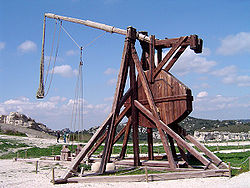 Sounds like someone’s gotta scale this bad boy up to FRC size: https://youtube.com/watch?v=jt6Jq439WQc

Do you know how much they are compressing the ball?

I’m not sure. They are using a 6” wheel I believe. It’s not a urethane/fairlane wheel.