Does Your Drive Team Have Any Pre-Match Rituals?

I’m curious to know if any other drive teams have any kind of rituals before going out for a match and how you started doing these.

Before every match we each eat a Life Savers Wint O Green mint. This started becoming a thing this year at the Bayou Regional when our Pit Boss had some of these mints in her purse that she would give to us before every match. Since we ranked second and almost won the regional, we decided that the mints helped us do better in matches, so now we carry a big bag of them in our robot cart :D.

Also, our Human Player does ten push-ups before every match. This started when our drive team (minus our coach who thought we were stupid) decided to do push-ups in queue towards the end of Champs. Our Operator and I stopped after that, but our Human Player kept doing it because he’s a show-off or something. Not that doing ten push-ups is all that impressive, but whatever.

When I was a freshman, our driver held his arms out to make sure we were all behind the line for autonomous. I think he got it from a previous technokat driver (picture attached). When I started on drive team I started doing it as well. 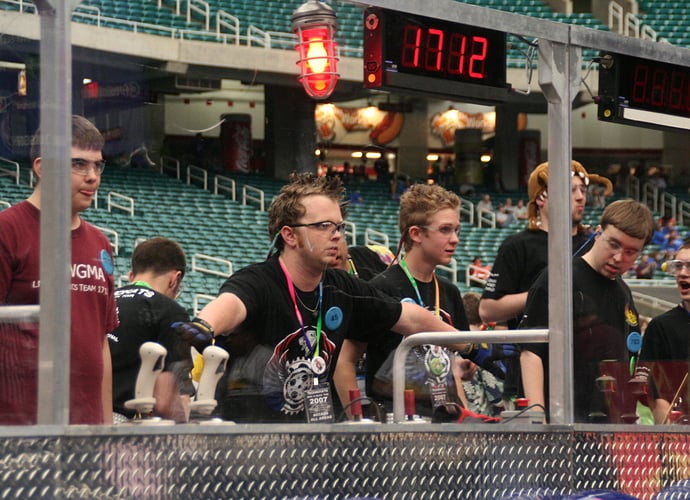 We’ve never really had any other than running back out on the field to turn on the robot.

Not actually a tradition, but I was on the drive team all 4 years, and forgot to turn the robot on for at least one match every single year.

Team 2052 didn’t have one. I suggested to the drive team since our robot name was “Termite” this year that when the announcer announces our team number and name, is that they should move their hands like the pincers on a termite while looking at the game announcer. Unfortunately, I don’t think they liked the idea or something like that… I wasn’t expecting them to do it anyway since I was joking… it would be kinda creepy too to the announcer I guess…

Team 2052 didn’t have one. I suggested to the drive team since our robot name was “Termite” this year that when the announcer announces our team number and name, is that they should move their hands like the pincers on a termite while looking at the game announcer. Unfortunately, I don’t think they liked the idea or something like that… I wasn’t expecting them to do it anyway since I was joking… it would be kinda creepy too to the announcer I guess…

That would have been cool. But yeah, maybe a little creepy, too.

I almost forgot about another one of our rituals! At every regional we attend where Greg Needel is the Emcee, we write I <3 Greg on our hands and hold them up to the glass whenever he comes over to introduce us. At one regional last year he replied with a heart and 3481 on his hand haha.

It was a ritual we hold so clear and dear to our team.

I can’t think of a match where we didnt do the ritual.

We always called it… “Deploying the code”

And the inevitable “IS IT DONE YET!”

Usually there’s some sort of dancing, often initiated by myself and followed by our partners either joining in, or shooting weird looks at us.

During our more crucial matches, we do hype circles, which consist of the four of us locking arms in a circle and jumping around while getting increasingly louder.

I don’t know if you could all it a ritual, but our drive team added some meme to their announcer response throughout Champs this year:

It was a ritual we hold so clear and dear to our team.

I can’t think of a match where we didnt do the ritual.

We always called it… “Deploying the code”

And the inevitable “IS IT DONE YET!”

Nothing rings so true to the depths of my soul as a programmer sharing these events with my drive team.

In 2015 on drive team we would listen to Centuries by Falloutboy before every match, and not give the announcer our giant wrench/team mascot for team introduction. Every match we forgot to do this we would perform worse.

Everyone on our drive team is going to take a spoon full of maple syrup before every match at IRI to channel our inner simbot.

For 4272’s Drive Team this year we would say “A good turn for good luck” and each member of our drive team would tighten a different nut on our bumper assembly.

It was also great for making sure our bumpers were on and secure.

I think it is very important to have a pre-match ritual, like a golfer taking off his glove before putting, it is important to get ready and focused for every match. If your team doesn’t already have one it’s never too late to make one!

Telling the queuer that came to visit our pit that we are on our way.

At the beginning of the season, my 3D printed princess crown got broken so I designed and printed a new one in ninjaflex. At my team’s first district event of the season, our main driver asked to wear it because he said that it gave him mojo and our team ended up winning the event. Two weeks later, I was cheering on a friend’s team at an out of state regional. Their lead driver was not feeling super confident going into elims so I let him wear the crown and they ended up becoming finalist and getting a wildcard to worlds. The crown ended up being named the “Mojo Crown” and helped our team seed first at our other district event and at the district champs, and helped our team advance the farthest we have ever gone at worlds.

Breaking the robot is probably the best pre-match/match ritual… Either it breaks because something got changed and wasn’t done correctly, either it breaks during the game. Oh, and trying to convince a friendly human player to be the spy to help us shoot

Last year our most extraverted lead driver (ever) did “high-fives all around” for every match. In elims he’d do it with the entire alliance. Pretty fun.

GUS’s ritual this year involved hopping as the team is being announced, then doing this weird thing where you lean back and wiggle your arms like noodles. Occasionally, someone does The Dab at the end.

The pre-match ritual I think is really important to the success of a drive team, no matter how silly it is. Generating some hype, unity among your drive team, building excitement, and focusing on something that isn’t directly related to the match ahead are all positive things sometimes. If your hype is elaborate enough, going into that match with an early “win” in pulling off your little ritual / routine is always nice.

In a few matches this year, we had a very long wait time before they started, and out of boredom more than anything else we just generated lots of hype with the entire alliance in advance of the match. We won every one of those matches and it was even more exciting than normal - there was so much unity on the alliance.

Before every elimination match:

I ask the drive team: “What are we gonna do?”

The required response: “Have fun!”

This helps remind our whole drive team unit why we do what we do. It’s especially important when playing deep into Saturday and students can have a tendency to be stressed/nervous. Also manages to get a smile out of the kids occasionally

We don’t have one as a team, but looking back I would pace to the human play station to our drive stations with one hand on my head and the other hand holding my clipboard about 3 times, probably out of stress. I managed to do it pretty much before every match.

Every match, every regional, every competiton, before the robot leaves for the field, we ALWAYS do a “GO SPARX ON 3” as loud as we can in the pits. If you’ve been at a competiton with us, chances are you’ve heard it.