Drivetrains outside of frame perimeter

Does anyone have any recollection of drivtrains that were designed to extend outside of the frame perimeter of the robot upon starting the match? I am excluding 2015 and the misc expanding, tethered, and wheelie bars that were a result of that strange year.

There are probably plenty of examples of omni wheels that are placed on floor pickup mechanisms that technically increase wheelbase, but I am really looking for examples of stand-alone deployment mechanisms/ drivetrain to increase the wheelbase.

In 2016 we designed our intake arm with drive wheels on the end and no hard stop so it could be driven into the ground and help increase our ground clearance to get over the defenses. It wasn’t designed very well so it slowly self-destructed the more we tried using it for that application, but the theory behind the design was sound (just not the implementation).

In 2004, there was a robot with a telescoping frame and at the start of the match, the front end drove forward and the back and drove backward and it pulled itself out longer. It had giant wheels to climb the steps. Very interesting design, but I think it had some issues. I can’t recall the number, but it competed either at Los Angeles or Phoenix that year. 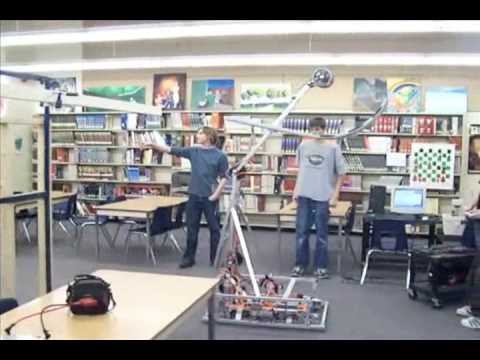 RIP to 276’s rotary walker. The 2003 version (the biggest and most terrifying) liked to climb other robots and rip their wiring out from above. Also 276 (allegedly, Dean has a picture of this robot hanging somewhere in his residence): [image] 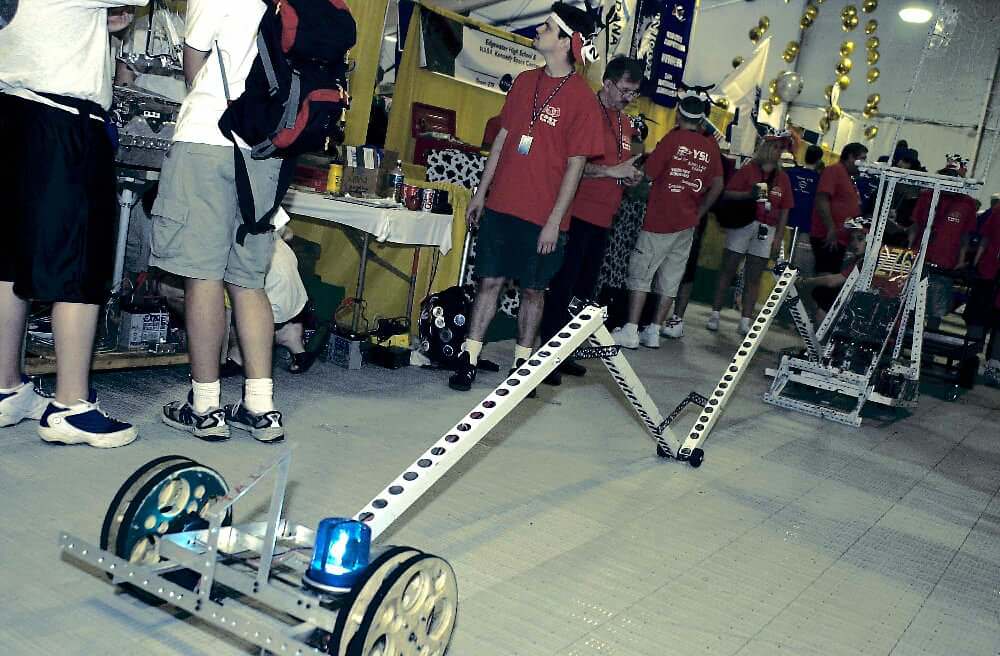 In 2006 Gael Force (126) had a third pair of wheels that would fold down to help them drive up the ramp during endgame. 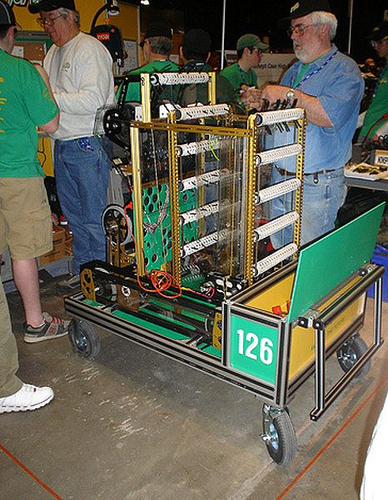 FRC 69. I immediately thought about them. Los Angeles Regional.

In 2016, on 3419, we used 8” pneumatic wheels on our swerve drive. To save space in the middle of the robot we positioned them all the way up against the edge of the robot when they were facing forwards. When the wheels were facing sideways they left the frame perimeter by about 3”. This was only possible because the bumper rules that year allowed for bumpers to be quite a bit higher than normal, so the widest part of the wheel could fit under the bumper. We would always start the game with the wheels facing forwards so that our starting configuration was legal.

You can see it in the first few seconds of this video: 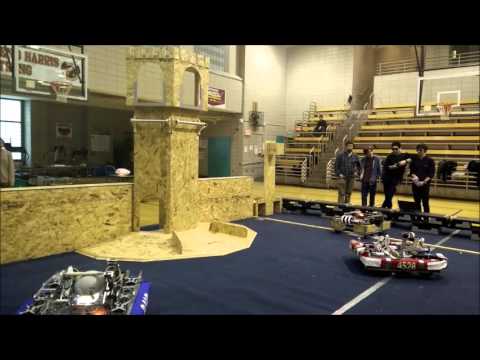 I recall seeing a reveal video in 2016 Stronghold with a triwheel which rolled out of the frame perimeter.

If you count climbers as drivetrains*, plenty of robots in plenty of years; in 2016 it was practically a requirement to reach outside the frame perimeter to grab the rung, and it was certainly common in 2013 (Ultimate Ascent), 2017 (STEAMworks), and 2018 (Power Up↗).

* They do move the robot as a whole.

Yes, but many of them (3946’s included, which was a spinny thing that entangled the rope) went well outside the frame perimeter to snag the rope. In the case of 3946, this was because we had the upper surface of the robot 90+% dedicated to taking gears in from the HP stations. Many of the robots with outside-the-frame-perimeter spinny things (including 3946) in 2017 wound up climbing with the bumpers somewhat to mostly to completely vertical.

67 also had drop out Ackerman wheels in 08 if I recall correctly. Though given their website seems to have been reorganized I can’t find their technical document on it any more. 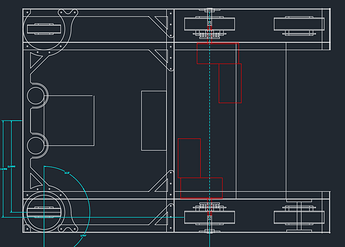 Ah, I never did have a great picture of them. 08 was a long time ago and pictures were low res

Also if you could poke anyone you still know there to get those docs put back up/drop a copy my way I’d appreciate it.

Dug up tech notes (I’ll bug them about the website) - looks like my guess from CAD was wrong, steered wheels are not driven.