So we might have done too good a job on the neutral buoyancy on our arm and it likes to hang out up out of the frame perimeter despite a 125:1 Max planetary and an additional 60:17 on the chain, a problem for Thursday (our next build day)…but I’m not going to sleep well if I don’t know this answer, which I couldn’t find poking around online:

Do Spark Maxes maintain brake mode with no power? If they do, that might solve our issue without further work on the mechanical side.

By “no power”, do you mean robot fully powered off, or Spark MAX just not receiving any commands?

Either way, if you have the Spark MAX set to brake mode, as soon as it turns on it will brake. Even if you command 0% output to it, and even when it’s disabled, it’ll brake.

I mean “robot is not energized. Main bus is open. Spark gap to battery is greater than ten feet.”

Falcons maintained brake mode with the robot off. Do NEOs?

Is this talking about the breaker? If so, then no. If the breaker’s open and the robot is not energized at all, motor controllers, and thus by extension motors, will not be able to brake, and will instead coast. Maybe you tested something wrong with the Falcons?

Three years running, drive train Falcons set to brake mode in Phoenix Tuner made the robot basically impossible to roll around when powered off. If we programmed them to revert to coast upon power down, easy to roll around.

I’m not a programmer nor an electrical engineer. I don’t know nuthin’ ‘bout nuthin’ as to the why’s of it. But I do know it worked.

That doesn’t sound right. Afaik the braking of motors is entirely electrical (I think it’s like shorting the wires of the motor together), meaning that if there’s no electricity in the system it won’t be able to brake. And in my team’s experience, a robot with brake mode wheels is easy to roll around when powered off but very hard to move when powered on.

Generally speaking, when no power is running through the system, all motors I’ve used effectively go into coast mode. For NEOs (and all brushed motors), I’m absolutely positive that they revert to “coast” when there is no power running through the system. It’s possible there’s some inherent property of Falcons that allows them to stay in brake mode even when not powered, but I’d find that strange.

For brushed motors like CIMs, you can witness brake mode on a disconnected motor by simply shorting the wires. The back EMF causes the motor to resist motion. I hadn’t done this with a NEO, but doing so just now I see the same effect. And also doing the same with a Falcon just now, I don’t - so, again, maybe they’re just special like that.

Edit: I’ve only ever used Falcons in a shooter and in coast mode, so there’s that.

It’s electromagnetic for a brushed motor, which is to say it doesn’t require any programming at all (or power) to mechanically set a brushed motor to brake. Back emf and Lenz’s Law are well-established electromagnetic phenomena, and I teach them to my students every year. Once you connect that motor to a speed controller, my knowledge of the subject gets fuzzier.

Being a physicist and not an electrical engineer, I’m vaguely aware that the FETs in a speed controller work by bribing the gnome “mechanics” living inside with “quantums” to get what you want out of them, but given that they’re basically a giant pile of transistor gates, they maintain their state after power has been disconnected.

Assuming the state of the FETs sets the brake or coast mode, it’s entirely reasonable that they can and will maintain that mode upon power down.

…and as a robotics coach who has had to, multiple times, tell his programmers, “oof, you need to set these Falcons to ‘easy push when off’ mode,” I can assure you that either this is a real thing or I’m a delusional madman.

I can assure you that either this is a real thing or I’m a delusional madman.

Perhaps. I am tired and looking at 10-month old memories so for all I know I’m the delusional one here.

Regardless, I’m hoping for an answer between now and bedtime, or at least bedtime tomorrow night, to the question:

Can NEOs be set to continue brake mode even when unpowered?

All FRC motor controllers require power to maintain brake mode, but usually pushing a drive base generates enough voltage to wake up the motor controllers. (I’ve mainly seen this on CIM drivebases, I don’t know for sure about brushless options)

Assuming the state of the FETs sets the brake or coast mode, it’s entirely reasonable that they can and will maintain that mode upon power down.

The FET must have power in order to be on in brake mode, and brake mode logic is implemented in software, not hardware (also requiring power).

If you notice a breaking force when pushing the robot, the more likely cause is that the back EMF from spinning the motor is acting as a generator, powering on the device, which then sets it to brake mode.

Can NEOs be set to continue brake mode even when unpowered?

No. (Same with other FRC legal motor controllers).

That really doesn’t jive with my experience with Falcons on a drivetrain, but I’ll roll with it.

powering on the device, which then sets it to brake mode.

Is there an FRC-legal way to make that happen? (“Physically possible” a bonus.)

Haha, my team had a fun time with this when they used pneumatic wheels in 2016.

I’ve never seen it happen on brushless drivetrains either but we had it happen last season with a climber arm driven by a NEO. We had to pull the arms all the way up before tuning the climber and if you pulled to fast they would brake.

Is there an FRC-legal way to make that happen? (“Physically possible” a bonus.)

Yes
The two most typical ways are
a: gear the device down such that it will not move without power
b: Use a device that mechanically locks the shaft (Or gearbox)
This can be done with a 1/2-inch wrench that can be folded back and forth and locked into a block like the 2020 Everybot. 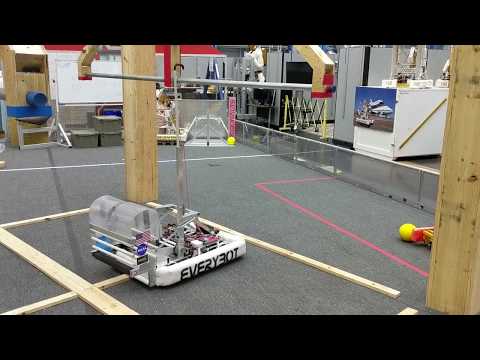 or
one of these devices Yeah, I’m on a 441:1 reduction (125:1 MAX planetary to a 17-tooth sprocket chained to a 60-tooth sprocket). It’s neutrally buoyant even without the gearbox and chain at medium and high scoring positions, but likes to ride high at low and stowed even with the reduction.

I’m trying to avoid a second mechanism like a ratchet, and am 99.9% sure brake mode will do that. But it would be nice if we didn’t have to have the robot powered on to be inside our frame perimeter, which is why I’m asking.

But it would be nice if we didn’t have to have the robot powered on to be inside our frame perimeter, which is why I’m asking.

Well once you power on, brake mode will apply, so that should be fine.