Clickbait title? perhaps
Do you have a bone to pick with a particular rule and/or it’s realization at a competition? Were there changes to Infinite Recharge you wanted to see put into place in a game update that never happened? Do you feel you have a way to improve team experience that never received the attention it deserves?

Some things, like barring teams from entering the field a few moments too late or last year’s frame perimeter contact violations are a given, but there’s probably a lot more.

Voice your concerns/suggestions and counterarguments here.
Linking to a long-winded post in another thread is also totally cool; these things kind of end up everywhere.

We have to modify a lot of rules for our off-season event to get them to where we are comfortable. Many of them are the same modifications every year. 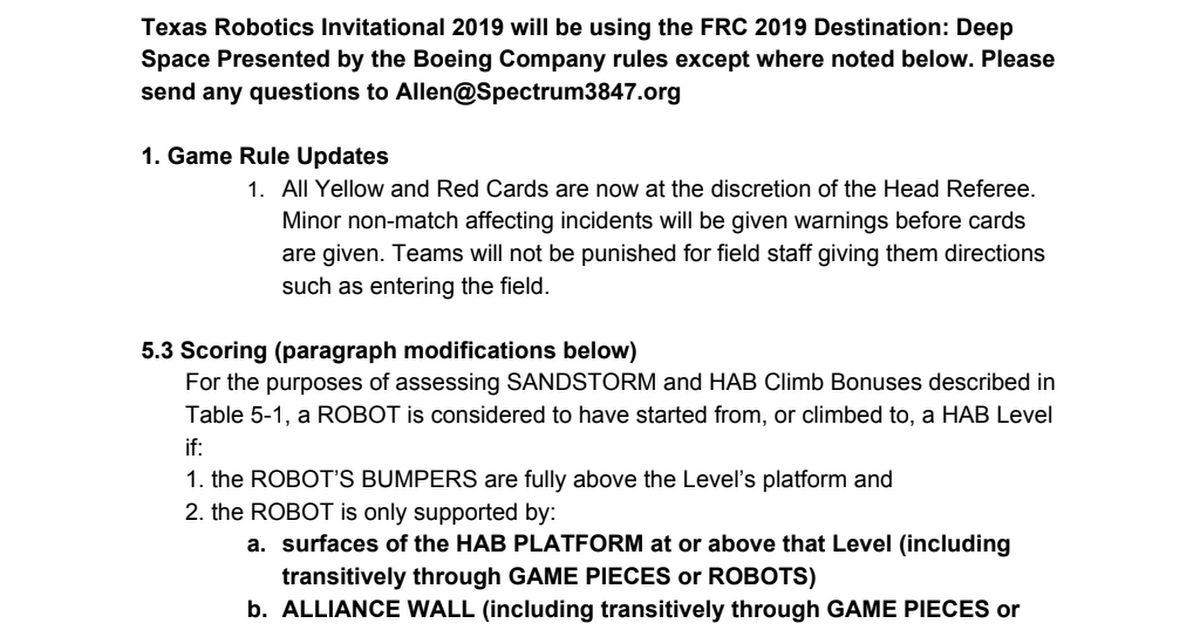 I have one that I’ll be suggesting to local offseasons. I don’t think it’ll make it into the regular season rules, though.*

Here’s a hint: I think there’s a better way to handle G4 and H10 interacting than the current blue box note in H10.

*Note: There’s still a chance that things can change. After all, there MAY still be official events. So use some caution, and aim some suggestions to the Team Advocate.

Why is there a weight limit? I want to have a solid steel dozer that weights 400lbs to play defense with.

Addendum: no killdozers please. I’d consider a walking weight bonus to be reasonable though.

I would’ve loved for 2015 to have no max height for robots or stacks.

There’s a minor rule that ended up costing my team a match last year, which states that robots in the first match have to be on the field during opening ceremonies. This isn’t as much of an issue past this year due to the end of bag day, but it kind of sucked to have a robot on the field that you knew had issues because you missed out on about an hour of testing and work because you got the first match. Yes, we could have avoided it by bagging a working robot. No, it wasn’t the biggest issue we had at that event. Still, it was just one more thing on an event that was a bit of a letdown for our team performance wise. I think changing it to require that match 1 is queued during opening ceremonies would be more fair and would have a minimal impact on time.

On the topic of opening ceremonies, I don’t think the pits should be asked to stop working during the national anthem if the pits are in a separate room from the field and we can’t actually hear it. It’s a bit weird to stand in a silent room and stare at the flag for a minute, to say the least.

Other than that, I can’t think of very many long standing rules I have huge issues with that aren’t administrative (like “no splitting states” for districts) or beaten to death by CD. (video review, playoff match timing)

After all, there MAY still be official events. So use some caution, and aim some suggestions to the Team Advocate.

We already know there’s at least one more team update coming from the generator switch blog post. I would assume that they’ll put it out eventually when fields start being rented, even if no official events are being played.

The BOM/CAW/Whatever they want to call it now is a complete waste of time, completely unenforceable, and when taken in totality, the complete set of rules that we are all expected to adhere to reads like a 3rd grader making up rules about a make believe game of Lego Star Wars while explaining shields and lasers to their friends.

The GDC opted to take a fairly liberal interpretation of the word ‘attach’ this year, to include things that no one in the real world would consider attaching. I’d change that, but I suppose I’m biased.

While not a game rule per se, I’d eliminate the safety award. I think it does a really bad job of encouraging safe behavior and instead incentives ridiculous and harmful levels of safety theater. Its just embarrassing at this point. And if we’re getting rid of the safety award, you might as well get rid of the UL safety inspectors/advisers/associates/whatever we’re calling them now while you’re at it. Most of them seem to have no practical understanding of industrial safety, anyway.

I have another one. The USB power pack rules currently prohibit the Raspberry Pi 4 (2.5A max output is too low, suggested is 3A). The funny part, you can work around this by ganging ports using COTS cables and I know that is not the intent of the rule. This also somewhat impacts the Jetson Nano and will most definitely impact future SBCs that might or might not be coming and I can’t talk about due to NDAs.

While I realize my dream of USB 3 PD is not likely to happen because “100 Watts is like 2 times the size of Hiroshima” or whatever nonsense is being peddled by some LRIs, it would be nice to see us adopt more sane rules around alternative sources of power when it comes to COTS computing devices.

Also - enabling coin cell batteries for purposes of RTCs would be nice.

2014 started off with G28 (foul for contacting your opponent inside their frame perimeter) not caring about who initiated contact. The rule was made so teams couldn’t ram an extension inside of their opponent’s FP, but the opposite effect occurred:

A scoring team typically had their intake extended while shooting due to the size of the game pieces. Taking advantage of this, defending teams could ram themselves against these teams, not only disrupting the shot but also gaining points due to G28. This, along with the completely open field, led to week 1 events looking more like battlebots.

The GDC quickly realized what was going on, and provided an updated that made G28 only apply if the extending team initiated the contact.

The pi 4 will run on the Anker 10k PD usb-c power pack, where it gets unhappy is if you hang to many power hungry devices off of it. So yes the number of power packs where it works well are small, but it does work.

The pi 4 will run on the Anker 10k PD usb-c power pack, where it gets unhappy is if you hang to many power hungry devices off of it.

If you stick that on a robot and it pulls more than 2.5A on a single port then what you have done is in violation of the FRC 2020 rules… however dumb they may be.

which states that robots in the first match have to be on the field during opening ceremonies.

What rule is this? It’s been requested, and often strongly recommended, but I’m struggling to find a rule that states this…

+1 on the CAWst sheet. That is an hours long exercise in futility.

When I make jokes on the sheet we get praised for how well we filled it out. When we spend hours doing it perfectly we get critiqued for minor details.

This isn’t a direct rule rant, but I’ve heard from around the community and from QnA questions that there have been things too the liking of a referee’s digest or something that FIRST uses to keep refs up to date with their interpretation and intention behind the rules. Bear in mind, I have no way to confirm this besides word of mouth, and if it is not true I stand corrected. However, I think this was to be shared with the community, it would be of great benefit with confusing rules. This would lead to less time in the question box, more clarity around the game, and everyone more informed. I believe this was seen with the G20 rule from 2019.

I don’t like how inconsistent pinning calls can be.

BIG PET PEEVE is at worlds the fields are still off a bit on dimensions. In 2017 teams going to Einstein would then miss the hopper in auto basically costing them the match. In 2017 I don’t know they didn’t just count off 50 fuel for every match to put in that main hopper.

I got one more. This one is about this subset, which is way far down in the blue box for R8:

High intensity light sources used on the ROBOT (e.g. super bright LED sources marketed as ‘military grade’ or ‘self-defense’) may only be illuminated for a brief time while targeting and may need to be shrouded to prevent any exposure to participants. Complaints about the use of such light sources will be followed by re-inspection and possible disablement of the device.

While this rule itself isn’t particularly bad, the lack of direction in regards to enforcement about what “brief” means, what “targeting” means, and what counts as high intensity are lackluster at best.

My personal suggestion for a resolution to this is to remove this rule entirely by removing retroreflective tape from the field. For those who don’t know, retroreflective tape is a type of tape that illuminates light back at the light source. So here we have a rule putting restrictions on light sources that could be avoided entirely by removing the tape that requires them to be useful.

It’s easy enough for teams to utilize colored targets or fiducial markers without the need for this tape and we’re already putting up thematic vinyl wrap so just get part of the vinyl changed and stick it up around the target.

I don’t like how inconsistent pinning calls can be.

I have come to the point where I view pinning like I do the strike zone when I play softball. The rules can say what they want but ultimately if the umpire says it is a strike it is strike. Same with FRC - if the referee says it is a pin it is a pin. The only thing you can do is scout the referees and adjust accordingly.

(edit to add - I did like the change made this year to the pinning rule.)

A first-year team with mentor support from two FIRST alumni is not a “Rookie Team”.

Is a dumb rule because it’s inconsistent with any interest in running a sustainable program.