Durning The Off Season

I am an alumni of a team back in 2012 2016… During the off steason i like taking our old old bots and even some of my own and restoreing them to their former glory to educate others about the world of robotics! Im not to worried about it right now and this year all the teams to be doing very very well with the competition! But during the off season this year im holding a class for some local students and am lookin to find any older robot parts. I like using older parts because it give a more in depth feel of how everything works together. Im not looking for anyone to tear things appart or anythinf like that, just anything to help out! Of youve got parts laying about, old motor controllers, wheels or anything they would be a great help! My plan is to build a bot with the class from ground up so they can understand the programing, machining, and electrical side of all parts! Good luck to all teams in the final events for this years competition! Its been really exciting being at some of the events and at some of the competitions! Thank you! Note: this is my first tims posting here… I got told that this forum may be the best place to reach out for help! Not sure if this is the correct topic to post this in but if anyone has any other suggestions as well they would be very happily appreciated!

Where are you located? My team has a bunch of old components that we haven’t used in years, but they’re heavy.

I live in lousiville sadly… I know there arent that many teams around this area… Theres on in Lexington but thats about it… Where are you located?

We’re in CO. You’re close to Indiana and there are several teams there, if I recall (district, right?). That may be your best bet to finding parts close to you.

I will tryand reach out to them! I know of 2 in indiana but they happen to be in the 3 to 4 hour range away… But it is still worth a shot for sure! Thank you!

I’m not entirely clear on why you want old parts if you’re trying to teach people to be competitive in modern FRC. If you want to replicate old motor controllers, Sparks are basically the same as most of the old PWM ones and are still commonly in use. But as far as the programming and electrical environment goes, teaching them to wire a can bus and use the built in features of the Talons and SparkMaxes will be a worthwhile use of time. Nostalgia can be fun, but the new parts are super cool and have opened a lot of new possibilities in FIRST.

There are teams around… At least one in Louisville (5492) and one nearby in La Grange (2783, one of my former teams). (If you’re with one of those teams, my apologies). On the IN side, the nearest existent team is 4926 in Columbus (I’m told Scottsburg, IN had a team for a year in 2020, but I didn’t hear until after they folded).

I’m near-ish to you in Madison, IN… but sadly I have no hardware (and there isn’t a team here).

My former team im an alaumni of is 2783! I love that team! I have their old bot Pascal ive been working on retoering and has been on several trips to show off and educate about the world of robotics and FRC! I know of 4962 and i havent heard anything back from them and its been a little over a year… Its sad what happened to the team… Wasnt awear of 5492… Ill reach out to them as well!! But im just looking for anything! I really love First and what it does for students and even parents so i do whatever i can to help educate and show anyone a new world or thing they probably never have seen!

Ground up my friend! History to new is the easiest way to show how things have progressed as well as hearing the phrase "oh yeah! Well that is more efficiant! I have 2 older bots as well that require controllers all the way back to Jags. The brown ones too! Ik the newer parts are a great way to teach about modern, but i have no Sponcers and no help with how im doing things, im a one man band but my passion has always been robotics… So whatever anyone can send old new doesnt matter! Ill do whatever i can with what ive got to still educate anyone who wants to know about it! Plus, yes there is nostalgia, but the struggle some teams had back when jags had shut offs and things, woulsnt ever been known unless you can show the evolution of what used to be and what is now! Education isnt just about this is whats now and only now, education is about from old to new, how has it progressed and whats to come later… At least thats how i see it

Yep. I was on the team for the 2011 season and briefly mentored right before the start of the 2012 season. You may have seen me for one of the summer/fall 2011 orientation meetings (I had to bow out of mentoring not long after).

Here’s a pic of me from that season to jog you memory (I was having too much joy with a pair of scissors!) 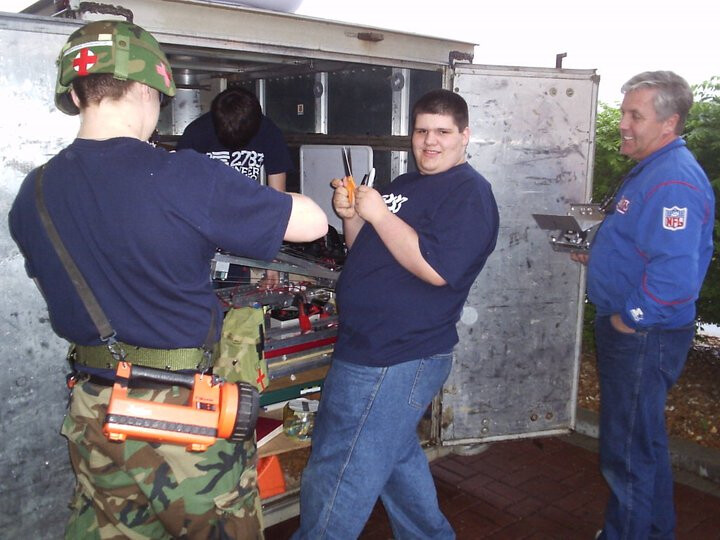 Does anyone know this person? I had a tote full of spare parts, at Rose Hulman and he didn’t show up like he said he would.
I wrote him but have not heard back.
I know his mother is sick, but he assured me that he would be there.

Hope Everyone Had A Good Season General Forum

To anyone whod messaged on my post about old parts sorry ive been away. We had a death in our familythe night of the tornado that went through louisville. Being said things are tough. Im still looking for older parts but im sorry if im not fast to reply. Between clean up and helping my dad through things theres a lot going on. Between the damage to my house and my car being destroyed by a tree… I can no longer drive places for the time being… If anyone has any older FRC parts or anyrhing theyd b…

I’m going to be traveling to Bryson City, NC this July.
I can drive back through Louisville on my way back and meet you somewhere nearby.
Please PM me soon.