Story as a document:

Do the Math - Save the World Alan N. Federman, PhD Forward 2018 On Sunday evening, April 8th, 2018 I was finishing my weekend on an emotional high, having finished the last regular season competition of my 20th year as a FIRST robotics...

That is Awesome!!!
I remember that team 25 Claw Robot well!
So cool to see stuff BBB (back before bumpers!)

Do you by any chance still have the tapes or digitized copies of these? https://robotics.nasa.gov/first/results.html

Still exists. in it are picture archives, but I am not sure if they are still all there in regional and national scrapbook files. It would take some work if someone wants to mirror the site.

I don’t think it ever got saved in the wayback machine.

Here is an alliance snapshot:

So impressive… All on Fischer Price Motors and plastic gearboxes!!!
I couldn’t even conceive of MK4i’s and Falcons in my wildest dreams back then!
Wish there was more stuff from the late 90’s and early 2k’s floating around.
The designs seemed more divergent. Probably due to the lack of instant communication.
Each team was designing and working more or less in their own little bubble and did not get to see what others were doing until the competition…

One of the sites I stumbled across at some point is https://www.frcarchive.com/ ; they seem to be mirroring and archiving lots of vintage FIRST photos and tagging them appropriately. Definitely worth a perusal if you’re curious

I’ve uploaded this clip which I couldn’t seem to find elsewhere on the internet: 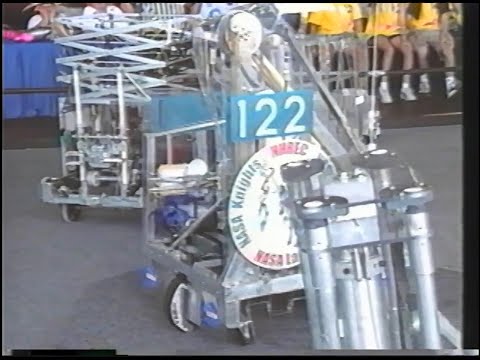 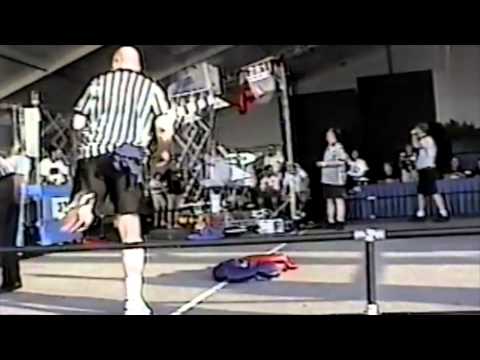 i had a much smaller version that i found uploaded here.

Well, there were a few window motors, van door motors and drill motors in there too.

Good point about each team working in the wilderness until their first competition. My students don’t appreciate that you didn’t have a place to look and see how others were solving the problem. You just did your thing and then got to Disney to see how it compared

Ahh yes, I remember the drill motors as well.
I believe that we tried to shift the planetary gear box with a servo, but had to rebuild the constantly from accidently shifting while moving!!
I don’t remember the first yr of the Cims/Chippewa motors. Maybe 03 or 04?

I think we went to Disney 2x. It was so cool to see the variety of solutions that showed up, like 71’s walker and many others!!!

Still some amazing (outside the box) things that show up such as last yrs Jumping robot (4907), but not as varied as before!

Are you still with Team 56?
We (358 at the time) played with/against you in the 05 Philadelphia Regional.
It was before bumpers and in the finals we inadvertently tipped you and got DQ’ed. Fun times! You all had a great robot that year!!! I think it was relatively low and quick with a long telescoping arm for the tetras.

I don’t remember the first yr of the Cims/Chippewa motors. Maybe 03 or 04?

02, IIRC. They were definitely used in 03 but I seem to recall uses a year or two before.

Anybody remember mixed-motor gearboxes, say with an FP and a CIM?

First year of the Chiaphua motor was 2002. The shaft had gear teeth cut into it with a very odd metric tooth profile. The KOP included a mating cluster gear made of a material similar to sintered bronze if I recall.

On 696, we did a mixed motor gearbox with drills and Chiaphuas in 2002, but it ended up not working out because of the very limited selection of gears available at Small Parts, and not being allowed to purchase from elsewhere.

2003 was the first year of the 8mm shaft with the 2mm keyway. The KOP gearbox was molded plastic plates and some rather high quality right angle helical gears. Almost no one used it. The KOP also included aluminum couplers that were a large hex (3/4 maybe) that had the 8mm bore with a 2mm keyway broached in it, and then another one with I think a 5/8" bore and 3/16" key. There were also molded black plastic pieces with a large internal hex for the aluminum hex couplers to fit into. The KOP included a couple of I think 4x2 aluminum rectangle tubes for the chassis, a couple Skyway 9x2 wheels, and maybe a couple casters too

My senior year of high school, we were mentoring an FLL team. I had used overhead markers to mark out all the lines on the team’s table - got marker all over my hands and arm. Had to go home to get ready for our Homecoming dance and panicked trying to get it all off since I had a strapless dress (I think my mom came through with some rubbing alcohol). That was in fall 2000.

I’m now my daughter’s FLL coach and president of a club that facilitates FLL teams. No one believes me when I tell them how it used to be before the pre-preprinted mats.

Very neat! Makes me wonder if I should upload the 2006 Champs wrap up DVD I found while cleaning out the other day. By 2006 things were looking quite similar to modern day comp.

Yeah, I remember that 2005 season well. That was a fun robot that year. We made the decision not to be able to pick up tetras from the ground and it simplified everything and made all the difference. That win in Philly punched our ticket to Atlanta - we had lost in the finals at NJ earlier that season and needed that win to to go Champs. We made it onto Einstein with that robot.

We tried a Drill / FP too. We hogged out a piece of aluminum so that it would fit around the outside of the drill motor and had a ring to clamp on the outside of the FP motor so that the motors were co-axial. We then got a coupler that attached the output shaft of the FP motor to the shaft of the drill motor (the drill motor had a little nub of a shaft sticking out the back side). It never made it onto a robot because it scared us too much, and it was Chip gearboxes from that point (I mean, until brushless motors…)