Our FTC team decided to use the entrapption star (Entrapption Star - AndyMark, Inc) for our robot design, but AndyMark is sold out at the minute with no ETA. Does anybody know of a similar product from another manufacturer, or the best way to create this ourselves?

While not the exact same thing, you can buy the 4" compliant wheels and cut chunks out of the outer diameter. Makes a makeshift star.

The new Spin Take are made with the same material and seem to be mostly in-stock.

Not exactly the same but if you are looking for some things to prototype we have found that compliant wheels with a bit of surgical tubing woven in worked surprisingly well. 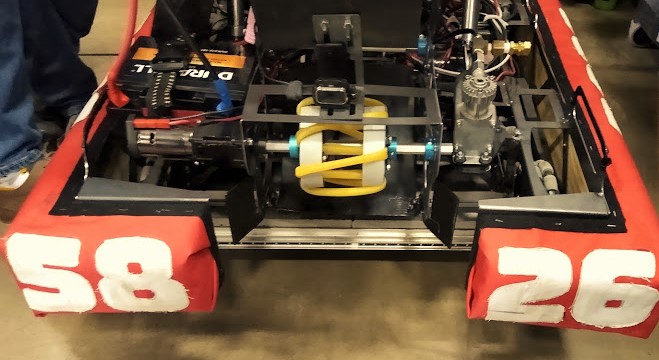 There is also the Armabot F1 intake. It has been supplied in the FRC KOP for a few years. And you can tune the diameter and stiffness with it. This hub system lets you make your own custom length flexible finger style intake. Attach rubber cords or sheets and spin on a 1/2" hex bore to collect or agitate game pieces. The kit version comes with the cord and necessary hardware to make an...

It’s a little stiffer, but I’ve had some great success 3D printing entraption stars (and variations there of) using TPU.

Below is an example of one version we made for a small, internal competition last year. Since we were printing it, we could include a small curve to the fingers, which helped with the game piece we were using (plastic Easter eggs). We could also manage the specific number and length of each finger to perfectly fit the game piece and the intake we were designing. Since we were using Vex kits, we had small, square shaft, and found it would eventually slip with just TPU. So the orange part is a PLA insert that was also printed - it gives better performance on the shaft, and interfaces with the TPU part to ensure no slippage! 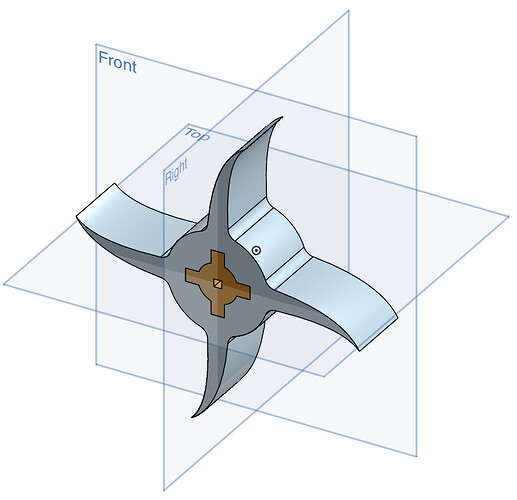 It was actually an interesting prototyping process to develop that curved finger. Originally printed straight, it wasn’t quite working like we wanted… a little time with a heat gun, and we could manually curve the fingers to different degrees to test how they would work, ultimately finding that “perfect” amount of curve!

One of the great advantages to AndyMark products is that they have significantly shorter lead times than other vendors that source all their components from China. This is great when FIRST comes out with a game that creates a huge demand for a niche product no one was expecting since AndyMark can get parts back in stock in a week instead of months. IIRC, these are water jet cut from a large sheet of rubber by a local company in Indiana so you’re likely not waiting on a boat. I would reach out to them directly to get an estimate on when these will be in stock. They’ve been very helpful every time I’ve called or emailed.

Their ETA was 3-4 weeks; a bit long, but our competition is in December. Thanks!

One nice thing about the Spin Take is that it can be mounted very close to the edge of the 18" perimeter of the robot and then can be oriented vertically for the starting configuration so that it fits within the sizing cube. This was a key feature of some of the surgical tubing intakes in prior years that used the yellow cubes (Res-Q, Rover Ruckus) as well as for other game pieces that tended to congregate near the field perimeter (Velocity Vortex). Collecting the game piece when it is up against the wall and especially when it is in the corner of the field is a lot easier if your intake can extend outside of the robot perimeter when it is spinning.

Edit: I posted this without actually reading the AM product description. It looks like they had already captured most of the reasons I gave for loving this product:

Our SpinTake has three bore options, making it a viable part for both FRC and FTC! This product is ideal as an intake “wheel” for picking up game pieces of varying shapes. Made from natural rubber, the SpinTake is flexible, yet firm. Its unique shape also allows it to be oriented to stay within the robot frame perimeter initially but can reach outside just by spinning. These work in a similar fashion to surgical tubing fingers on an axle, but are easier to implement and provide a cleaner look with more consistent results.

This is actually not a terrible idea, the wheels are also available in 3" and 2.25" versions too for more variety (the stars are about 4.75" in diameter, for reference). Not to mention the plastic hub is substantially easier to use than the press-fit ones on the all-silicone stars; plus, as an added bonus, the wheels are 2x the width of the stars, meaning you can use half as many of them (depending on the situation).

We’ve done this kind of thing with the old 2" silicone compliant wheels (the new ones are TPU) before, so I’m amazed doing it with the larger wheels never occurred to me.

If AM came out with a hub-version of the red wheels and entrapption star, that would be a really nice addition to their lineup. I’ve had them spin on shafts too many times from applications where there just wasn’t quite enough torque transfer from friction. Once they start spinning they never get better either. The plastic hubs, just like on their other items would be great, but I imagine this is more difficult as these are made on the jet rather than extruded or molded.

If AM came out with a hub-version of the red wheels and entrapption star, that would be a really nice addition to their lineup.

They have a hub version of both the red wheels and the entrapment star. They also have a nub version of the Spin Take.

For now, we’ve put a scary sounding re-stock date of January 2022 on products that use this 1/2" red material. We are actively working to improve this. They are produced locally - however the base material availability is the hangup. When we have updates to this date, I’ll be sure to put them in this thread.

IIRC, these are water jet cut from a large sheet of rubber by a local company in Indiana so you’re likely not waiting on a boat.

Unless the half inch thick red stock is on that boat. Now seems to be a bad time to be waiting on boats because they are all backed up trying to get into US ports. 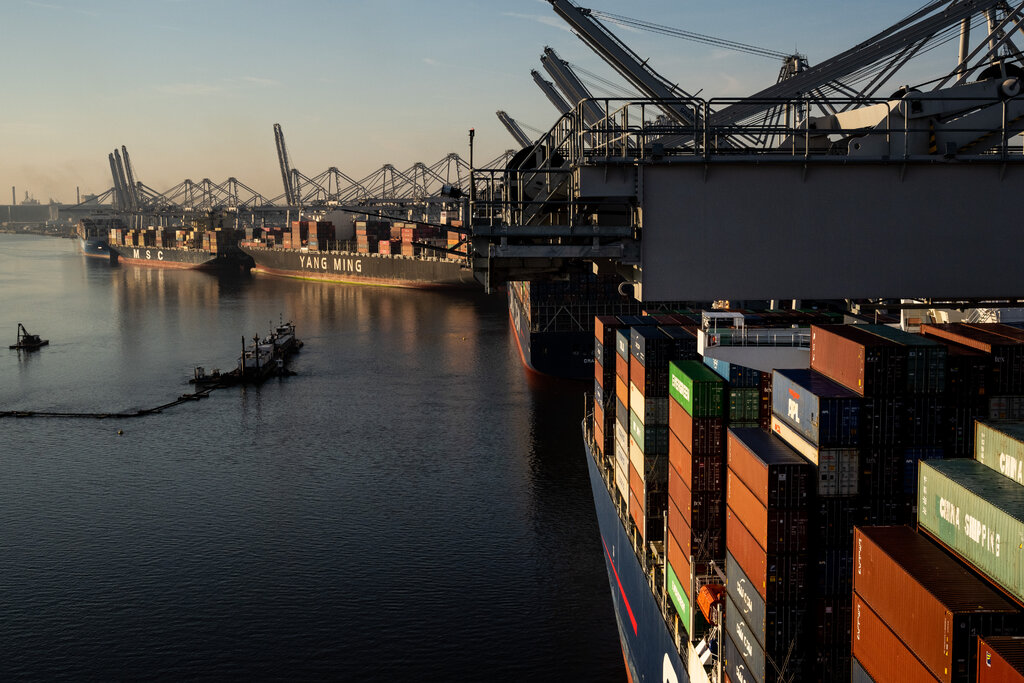 ‘It’s Not Sustainable’: What America’s Port Crisis Looks Like Up Close

An enduring traffic jam at the Port of Savannah reveals why the chaos in global shipping is likely to persist.

“Dunno. We’re looking for it, must be here somewhere.”

Can confirm that cutting the outer rim of a soft compliant wheel works well for intaking odd shapes. 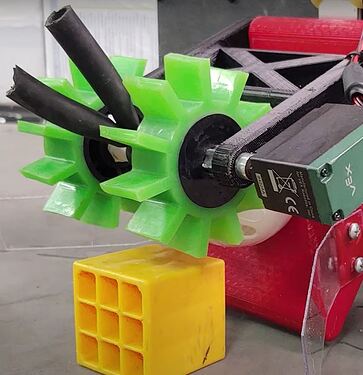 I think he means a version with a plastic hub like what the 3" and 4" compliant wheels have, rather than holes to mount a separate 8mm FTC hub. Also, the red wheels we were referring to were the 2" wheels which also do not have a plastic hub.

A traditional solution in this space is various flavors of surgical tubing which you can get at various hardware stores or online vendors.

In fact, nearly every Champs winner with these particular elements has ended up taking this particular approach…

Likely this is because the approach offers finely adjustable ranges of beater stiffness and length, making it simple for the team to iterate as many times as required to perfect the intake. Touch-it-own-it FTW.

I think he means a version with a plastic hub

But, the extra holes that are included for the “hub” and “nub” versions of these products will help to prevent the spinning on the shaft problem that @Cyberphil stated was the shortcoming of the currently available products. For FTC applications, that should be enough.

When one zip tie inserted through the surgical tube is not quite stiff enough, you can just insert a second, or a third… Ah good times!

Yes, the , “hub” version (with the holes on either side of the shaft hole) does help with this, and I am really glad that was added as an option.