Every team should seriously consider the low goal this year

I am dead serious, every team in FRC should consider it carefully before writing it off. In my opinion, it’s really well balanced compared to other similar objectives in past games and offers some pretty significant advantages compared to scoring in the high goal as far as being faster, easier, and a safer bet for locking in the cargo RP. It’s also going to be much easier under defense, which has very few restrictions this year. Not to mention that building a simpler robot allows finishing sooner and getting more time to refine the robot and practice driving.

I’m not saying every team should actually do it, but everyone should consider it, in my humble opinion

You’re telling me! This was one of my first thoughts after perusing the rules for all of about 5 minutes. Really hope teams consider this route.

We are seriously looking into this concept as well. I think the balls will be chaotically everywhere. The weight and potential speed of these balls in motion will be an issue if there are six teams all shooting at the high goal. 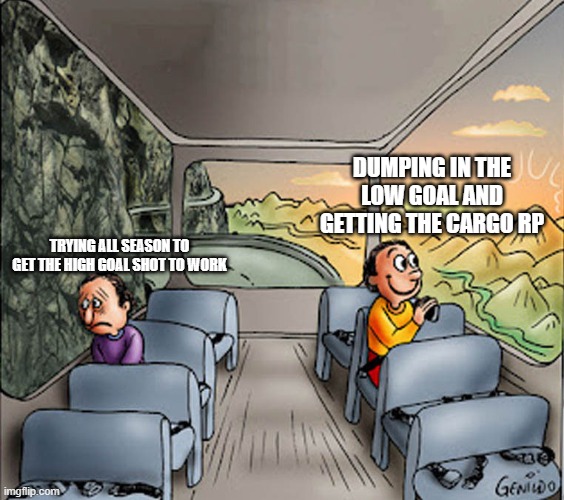 An additional consideration is that the agitators are designed to get the low goal CARGO back on the field in 5 seconds vs 7 seconds for the high goal. Between the RP being based on the number of CARGO scored (independent of high/low goal) and this, I totally concur. Get the low goal down solid before you spend any brain cells on the high goal.

Also, the cargo scored in the low goal are easier to get back in control for scoring thn the bouncing high goal scored cargo. Interesting design consideration, i think this game overal is very well balanced. Very exciting.

I have little doubt that this will be the favorite game since 2014 (Aerial Assist). Depending on how the meta develops, this game has GOAT potential.

After 3 suppliers announced climber arms, I was definitely hoping for a 2013-like climbing challenge, where the COTS arms would simplify the challenge, but not solve it. By implementing a maximum height that requires a rung-to-rung climb, the GDC has done exactly that.

If your team is considering low goal only (which seems pretty viable), take a page out of 2135’s 2020 playbook and build a double wide shooter and skip the complexity of indexing. 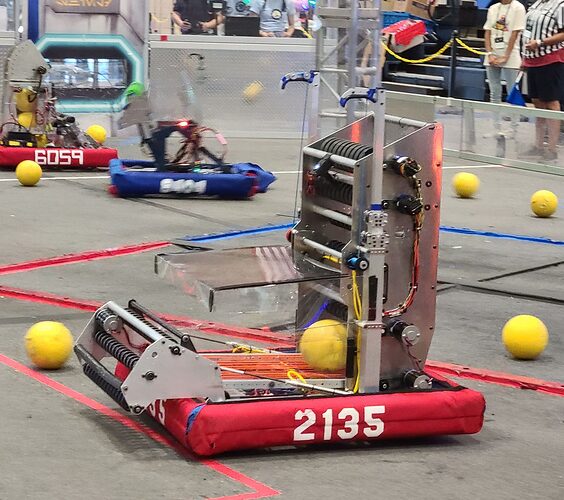 Definetly agree. Do not waste any time at all indexing there, you need to get in and out of there as fast as possible. That design is actually mostly good to go for a low goal bot this year, just make your hopper smaller and change your hood arc and you are mostly there.

And probably point the shooter in the opposite direction

Is there any reason teams considering the high goal shouldn’t do the same thing?

Not necessarily, one thing to consider is shooting 2 balls side by side in an arc may lead to some issues with mid air collisions.

This game looks like it’ll heavily reward simple, but consistent designs. I could see a team with only a low goal and level 1 climb mechanism making it pretty far at events.

And still leave room for the very accomplished teams to show of their skills. In effect, this can raise the floor for the 2nd (and 3rd) pick robots in playoffs, making the game much more fun to watch.

My prediction is that Everybot for this year is a low-goal and level 2 climber, possibly with floor pickup skills.

I agree, and I think that robot, with some minor improvements and driver practice will be better than >70% of robots fielded this year

See I also loved the idea of a low goal bot at first because I was confident that low goal cycles could be more than double a high shooter (hence making up the point difference). But I eventually ran into problems with it.

I’m interested as to why you think defense will be easier for a low to deal with because I had the exact opposite thought. I think it’s incredibly easy to stop any low scoring robot because the robots can be as high as the low goal is and cover half the opening (4’4" robot compared to the top of the low goal being 5’7"). If a defense bot just goes in circles around the HUB the low goal team could really easily score 0. We also did some “human-robot testing” with carts and found low bots easy to block as they had to get close to score (ofc this isn’t a completely representative test lol).

However, for high bots, you can shoot from anywhere (theoretically) AND have a protected zone to shoot from, meaning you get GUARANTEED points no matter the defense (even if its slower than normal, its still guaranteed shots). Also shooting into the low goal seems harder than the high as you can’t “high arch” the shot into the low goal. Hence why you cant shoot into the low goal over a 4’4" robot.

Based on this, the most guaranteed way to score was high goal. They were similar anyway if done correctly (low edging it out), but the fact that a low bot could be completely boxed out made me rule out low bots entirely. I’m curious if anyone has anything that would prove me wrong as I really like the idea and simplicity of a low bot, too.

However, for high bots… you get GUARANTEED points

The challenge is actually scoring those balls. Thats a ~17 foot shot you have to lob in without it bouncing back out, which will be a challenge.

I think most teams with some driver practice can outmaneuver the average defense bot with much less effort than trying to get that shot.