Over the weekend, our team attempted to open up the housing on multiple Falcon 500 motors and were able to get one of them open. We found that while the 3 housing screws (50mm long, Torx T10 head) had very strong thread locker on them, the 5 shaft retention screws did not. We also discovered that that 8mm ID washer/shim on the motor shaft was missing.
Getting the 3 housing screws out was the biggest problem. We tired two separate approaches: One was putting WD40 on the face plate end of the 3 housing screws, waiting several hours, and then attempting to remove the screws. That resulted in stripped screws that were not removed. The other approach we tried (on a different motor) was heating the 3 housing screws one at a time before attempting to remove them. Initially we tried a standard soldering iron, but that didn’t heat up the screws enough; next we tried using a hot air rework station set to 500 degrees C. After applying heat for a few minutes (on one screw at a time as the face plate end), we were able to carefully remove the screws using high-strength Torx T10 bit (we ruined several lower-quality T10s earlier). Using this method, the whole process of just taking the outer shell off took around 15 minutes for one motor.
Teams will need to get replacement shaft washer/shims from either VEX themselves or order them from McMaster-Carr (part number 94773A712, according to the earlier VEX post). 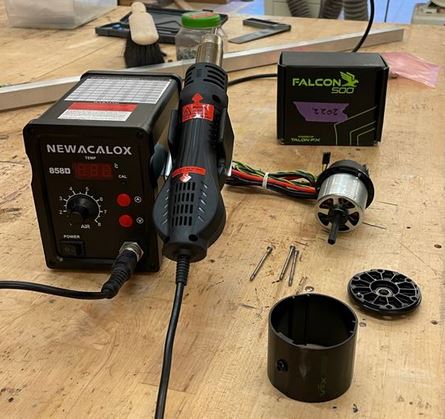 Should this get moved to the existing thread on this topic?

When do you expect to have the 217-7450 Falcon hardware kits back in stock / available to order?

Done. In the future please feel free to flag it.