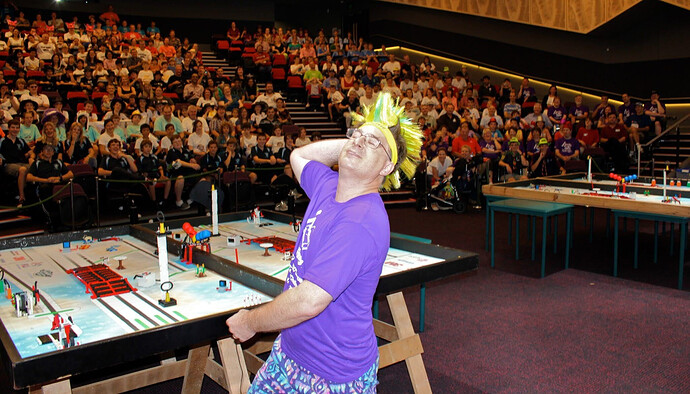 I have been asked to pass on the sad news that Mike Heimlich passed away yesterday morning. He had been ill for a few months, and is now at peace

Mike was nothing less than a FIRST icon: one of the founders of FIRST in Australia, a beloved mentor of 3132 and many others - as of 2021 he was a registered mentor on no less than 23 other Australian FRC teams! For the younger kids, he was the announcer with the crazy hair at FLL tournaments, notorious for going “off script” during closing ceremonies. He was accessible, enthusiastic, passionate and crazy – and he was loved.

Mike was passionate about seeing “everyone, everywhere” reach their full potential. He had travelled around the world inspiring students. So in lieu of flowers, the family are asking that donations be sent to the FIRST Australia Michael Heimlich Scholarship Fund: https://firstaustralia.org/BeLikeMike/

There will be a hybrid in-person/remote memorial on January 27th at 11am (Sydney time). To register, please fill out this form: https://forms.gle/cNFTnDiudLbYpdQe7

Finally, please give those that you love an extra hug today. #BeLikeMike

Sending my condolences to the Heimlich family and 3132. Mike was an extraordinary man and he will be missed dearly.

I had the pleasure of meeting Mike back in 2017 when 3132 and 166 had a pizza party at a park in New Hampshire the day before festival of champs. I remember I asked him if he wanted to trade team shirts that day and his eyes lit up and immediately went to go grab a shirt. From there on we just talked robots for the next few hours.

How unfortunate. Needless to say this is a massive loss to the FIRST community.

I wish his family and friends well and hope that they can find some comfort in knowing how many lives he had an impact on.

FRC Team 1501 sends the condolences to Mike’s family and FRC Team 3132 and all the others that his life has touched…
Rest in Peace.

He’s one of the best people this program has known. He and his family did so much spreading the program through the world and building up 3132, but I think what we will remember him for is how he made people feel. When you talked to him, his focus was on you and you knew it.

He brought out the best in people, we just have to try to emulate and follow his lead.

This video captures Mike’s passion for engineering and teaching students. Prayers to his family

I never met Mike, but that was a strong voice representing much of what we are trying to do in FIRST. Clearly that will be missed. Condolences to the family, but Mike was a member of broad community and be assured his impact is, in a way, now immortal.

Mike and his family has been so important to the success of FIRST outside of North America. 3132 has done so much to promote this program across Asia, and of course, they are the prime driver in Australia. Members of our team traveled to China to tutor in rural China, we celebrated their Chairman’s win in 2017, and we were overjoyed to have them on our 2019 Champs alliance. Mike’s impact on our team has been manifest. Our condolences go out to Luan and Sarah.

May his memory be a blessing.
To the Heimlich family; sending you peaceful energy as you move through this time.

It is always devastating when someone who created so much positive impact for the world, and for our community, leaves us too soon. My condolences to his loved ones, and to the FIRST community members who mourn his loss.

As we approach the season, let’s do so with Mike’s passion and enthusiasm in our hearts.

Mike’s contributions and impacts on the FIRST community are too numerous to document here. But when I think about Mike, it’s not about all those amazing accomplishments and the people he influenced, rather the first time I met him. It was at the airport in St. Louis in the security line and he was just so kind and thoughtful. Every year at Champs you interact with hundreds of people and for the most part those interactions usually aren’t memorable. But Mike’s overall character stood out so much that it stayed clear in mind, despite the two of us not interacting again and becoming friends until years later. #BeLikeMike by being so kind and thoughtful in all your interactions, such that folks will always remember you, even within a sea of hundreds. RIP.

Mike was an absolute icon in not only the Australian FIRST community, but across the globe. He will be greatly missed.