Share your favorite designs for elevators here (and CAD if you have it)!

As a team, we are looking into making a new elevator design in the offseason and could use some inspiration. 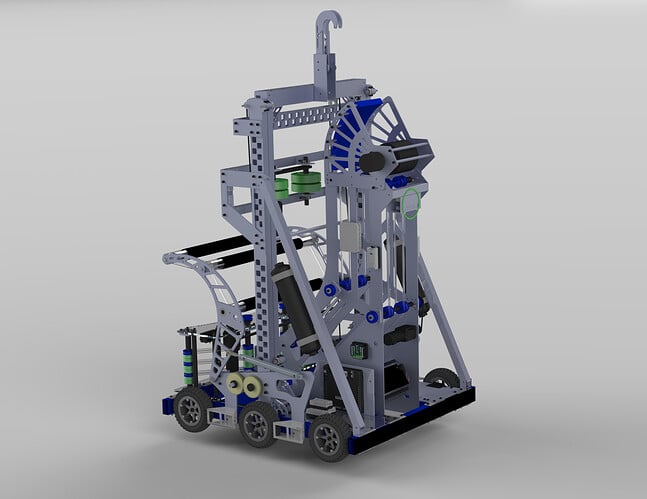 EDIT: If you have any questions, my DM’s are open

Did you have any issues with the pocketing on the side rails? Particularly with the center webs where it’s super thin.

We’ve been using that pocketing design for a few years now and we have had zero issues. No bending, fractures, racking etc. If you watch qual match 17 at NCT 2020, we got hit hard after climbing and everything was solid after.

Reason why we do it is for imagery. Checkered flags are our thing.

I have personally been ogling 1114 Simbotic’s 2019 elevator. It’s such a clean design, and I have a soft spot for cascade rigged elevators. That being said - it’s designed for a specific set of manufacturing resources, so it would not be easy for some teams to replicate.

I also really love 2910 Jack in the Bot’s 2018 Elevator. From personal experience trying to make a modified version of this in 2019 - the long belt is pricey and installing inside the tubes is a royal pain, but it runs like a dream. I will probably stick to external rigging in future elevator designs but this is still a great baseline design.

I also highly recommend reaching out to the original designers when copy/modifying someone else’s design. Just because it worked doesn’t mean they liked it or would do it the same way again! Both 2910 and 1114 have graciously answered my questions about their designs and what they would do differently if they did it again. It’s not my info to re-share so I won’t put it here, but I’m sure they would gladly share it with anyone else who asks.

I was just recently designing an elevator. CAD here, I have not built this design so no guarantee it works well. I looked the the 2019 elevators of teams 1114 and 2056 when looking for inspiration. This design also took a lot of inspiration from the Greyt elevator. I also really like 148’s 2019 elevator. Their bearing setup utilizes a lot of (what I think are) 3D printed parts that experience pretty high load, so strong prints would be important. 148 has 2019 CAD on their website. 254’s billet bearing blocks are very nice, though obviously much harder to manufacture.

I have fallen in love with the idea of elevators that use 1 way ratchets to allow for continual tightening of ropes to maintain tension over time. I believe 1323’s 2019 robot was the first I heard of such a design

Personally I feel a good elevator starts with a nice bearing setup. Some of the 1086 seniors have been working on a “for fun” robot during 2021 (and we will reveal it on CD soon), here is a bearing block we are running on that robot. 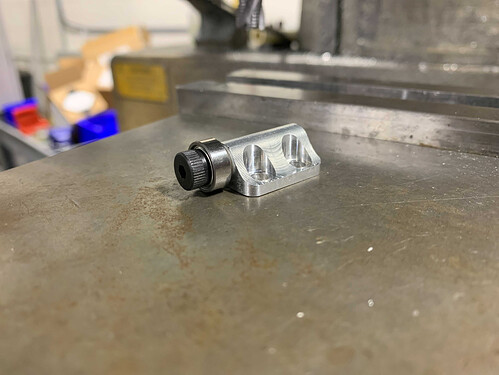 For a single stage elevator/climber we have really liked this design. It runs internal bearing blocks that we machined out of UHMW.

I’m sure @RSimpson can give more information about it.

Our team created lifts based on this specific 254 design as well. I recall a couple mentors saying this was an “easier” build season that year for them, the year they won their 1st Championship.

Sometimes, its better to be the “2nd best” robot in your division at Champs (based on alliance selections).

We ran UHMW bearing blocks on our 2 and 3 stage elevators in 2018 and 2019 to great success. In 2018, they were made by hand out of 3 pieces of UHMW, making an H shape. In 2019, we machined them out of a single block of UHMW instead. Took a bit to get the correct tolerances, but once they were on, we basically just greased the rails at the beginning of each competition and let it go. Stood up to a lot of wild loads and impacts in 2019.

Team 3838 Roc City Robotix 2019 Elevator uses 8020 with 3D Printed ABS Sliders. 8020 is a little heavy but it is stiff. Using the custom sliders allows us to keep the inside and outside of the 8020 for mounting stuff.

In the picture top sliders on the last stage (carriage) are missing. 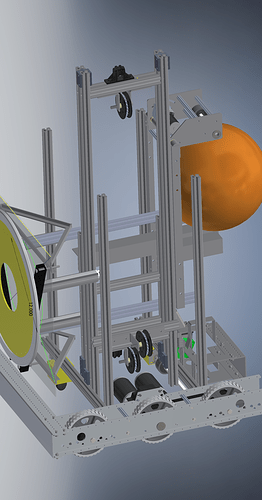 Sliders work as long as you do not have a twisting load. We mount one on the top of each side of the fixed first stage, and two along the bottom of sides for the second stage, giving us a larger distance to prohibit the sliders from locking up in the YZ Plane. We also have a slider that does not have the tab that sticks into the slot so you may use square tubing and save some weight on the last carriage. Sliders on the last stage would then be mounted to the carriage. 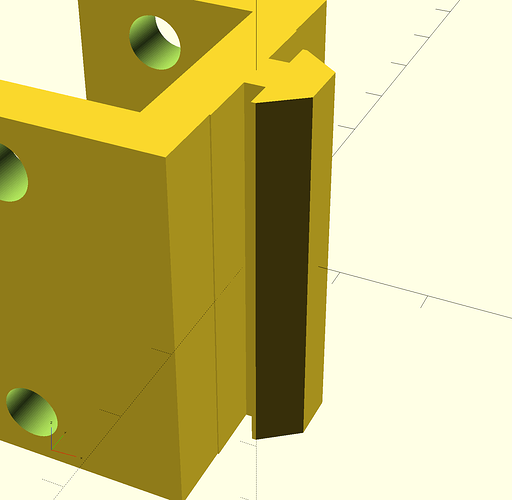 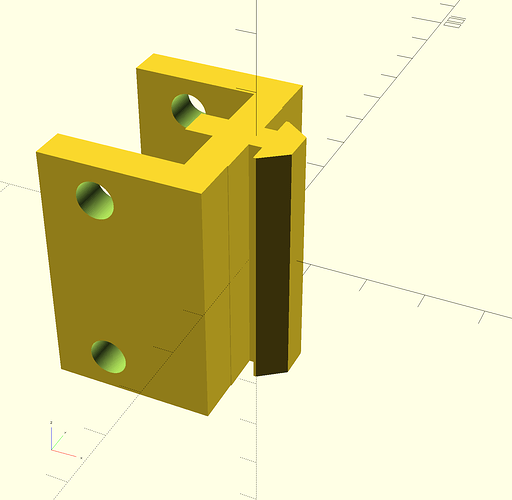 We wired the elevator using Cascade wiring with the first stage chain driven up and down using a CIM. The weight of the elevator causes the system to lower to the starting level and we use a small amount of current to hold the elevator in place after we raise it to position.

2nd and 3rd stages are wired in Cascade with an additional set of wires to drive the stages in the down direction too.

For position we used 3D printed flags and a dual optical slot sensor mount. Sensors are mounted back to back so that each flag trips the sensors generating a Quadrature [AB] output. We intended to use the AB signals to drive a Quadrature SW Encoder on the RoboRio. As we pass each flag it should increment or decrement by 4 counts. The flags mount in the 8020 slot so we may adjust the positions by moving them up and down. We call this a Linear Non-linear Quadrature Encoder. ie its a linear encoder with a nonlinear distance measurement. 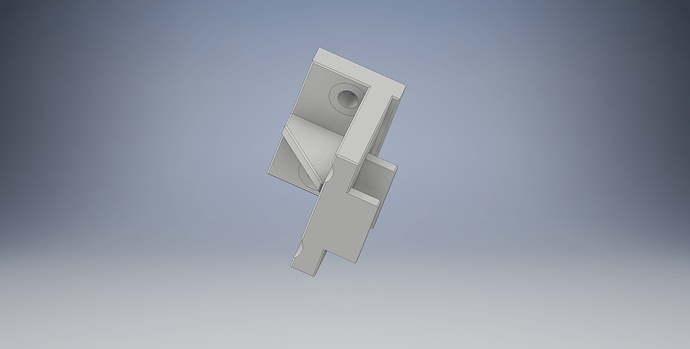 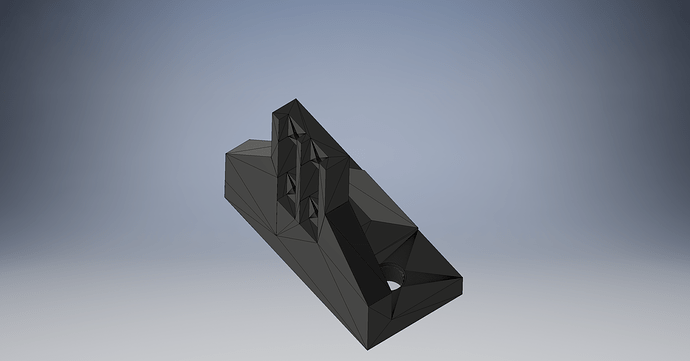 Note that we ended up with one flag with sensors inline with each other even though we had printed two offset flags. We tried a 3D printed T-Nut that we could slip into the track but they didn’t hold up. The flag has to be longer than the distance between the slots of the two detectors so that we can generate the Quadrature output sequence.
(~A~B, A~B, AB, ~AB, ~A~B, …)

Unfortunately our SW was written to detect edges and generate a SW position instead of using the Quadrature Encoder method. Then during debug we had started with the elevator in a raised position, SW reset the count to zero, and enabled us to drive up until we crashed the sensor mount. This gave our SW team the impression that optical sensors and flags were not as robust as a hard wired limit switch. Limit switches were then added to the design.

Also note that each Slider has two 1/4" holes that we use with bolts to bolt through the 8020. If you use T-Nuts and smaller bolts to hold each side then you risk cracking the 3D printed part. We print the parts using ABS in the up/down (Z) direction so that the tab that rides in the slot has the greatest strength in the XY plane. We trim the part with a knife after printing as the bottom layer prints a little heavy.

For 2019 we mounted two different mechanisms, one on each side of the elevator with the elevator rotated relative to the robot. This made it easier for our Team to work on each mechanism separately. A little bit of spray Silicon Grease on each slider was used too.

We also used 3D printed parts for mounting the sprockets, and guiding the wires.

Can’t believe nobody has said 148’s 2018 elevator yet! That thing was super fast and the sheet metal work on it was really complex and cool