Looking at the field layout for Detroit and Houston a question I want to bring up is the possible “Randomness” of said field. With field like Curie hosting 6 God teams ( 195, 987, 1114 , 1241 ,2056 , 2767 etc ) and Darwin with 5 God teams ( 16 , 125 , 217 ,225 , 1690 etc ) and then fields like Tesla hosting at best 1 with team 27. Is there a chance that there is an overall algorithm that decides how the fields are “balanced” and do you think this creates an unfair advantage or disadvantage for specific teams. For example while a team like 27 could easily win their field would that stand a chance against some of the more over powered combs like (1114, 2056) . Also what is your fav field for either Detroit and or Houston and why?

3 Likes
How do they choose which teams go to which divisions for the Detroit championships?
Shelby_Lamp April 20, 2019, 5:47am #2

I believe they tried to do a balancing algorithm before and that didn’t work because it was based on team numbers. Maybe one with ELO could work but I really don’t think it’s a good idea. Just stick to randomness.

Edit: You’re also ignoring how deep each field is. If you have 2 good scoring bots and a bad robot vs 2 good but slightly worse scoring robots and another good defense bot the second alliance has a good chance.

Field assignments are not “truly” random. See Section 12.10 of the manual. As to favorite division, gotta be Curie.

So this method sounds good however how does this explain teams like 346,341 who are on the same field?

I don’t understand your question. Veteran teams are assigned randomly to each division.

I like the idea of an elo based algorithm on trying to balance the fields. However I don’t think your second point answer the question like if the only way of sorting teams is by number then how deep each field is should be very similar if number had anything to do with team ability but as we all know there are many factors that go into how a team preforms and do you believe there could be an inherit bias with this system

Then you can see that its not random which means you could in theory know your field prior to worlds?

Well my point about team number is about something FIRST has done in the past which was not successful. My point about how deep each field is was for the fields that we currently have because the OP basically said that Tesla basically had no chance at winning.

Translation: Randomize a team list of all teams in either Rookie or Veteran class. Place first team on the resulting list into Division 1, second into division 2, 3rd… you get the idea. Repeat for the other class.

If you REALLY want to be extra tricky, mix up the rookie and veteran divisions when putting them together so Rookie Division 1 doesn’t match up with Veteran Division 1. (Actually, the number of teams might block this anyways.) Then slap the resulting Division 1 to, say, Turing instead of Carver.

Back when I was a student, the divisions were predictable–matter of fact, folks were able to predict 'em on a regular basis. That’s because FIRST didn’t randomize the list first. Later they randomized by order of registration, as I recall–no idea how they’re currently randomizing.

I think TESLA has few other teams that are very competitive 3357 - Comets, 3572 - Wavelength, 548 - Robostang, 610 - Crecent Coyotes that I know off. 27 is veteran HoF team and know how to perform on the center stage, but I would not discount others.

Stacked divisions like this are more likely in a pure random assignment than in an algorthmic assignment. But that path is a dark and twisted road; those more experienced than I will speak of the fabled ‘Algorithm of Death’ of the early 2000’s. Probably best to keep things random and accept some division stacking for overall fairness

how deep each field is.

Could you please explain what a “deep field” mean?

I’ve always wondered about a system that tries to balance teams based on how they qualified. Theoretically each division would have an equal number of chairman’s winning teams, ei, wildcard and so on.

Tesla hosting at best 1 with team 27

MI state champs has an algorithm that randomly balances teams based on district points earned, at least as of two years ago. It seems the problem with using any algorithm at worlds is what metric do you use to equalize divisions, since worlds doesn’t have the benefit of everyone playing for district points.

Not to mention Indiana rookie sensation 7457!

For the record, here are the World OPR rankings for each division: 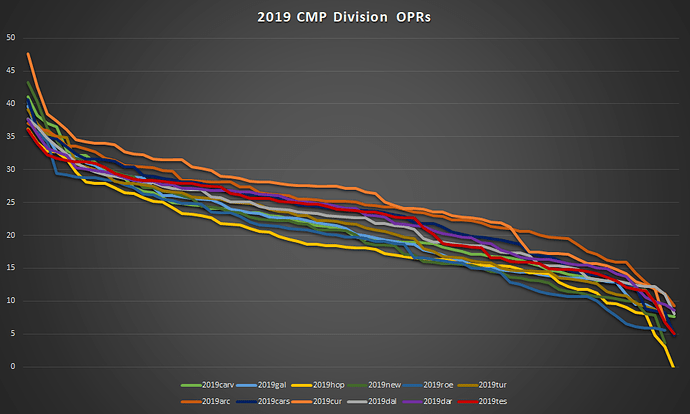 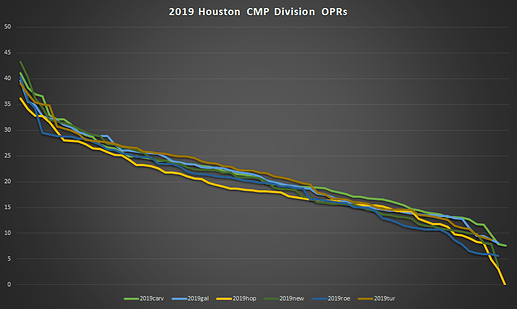 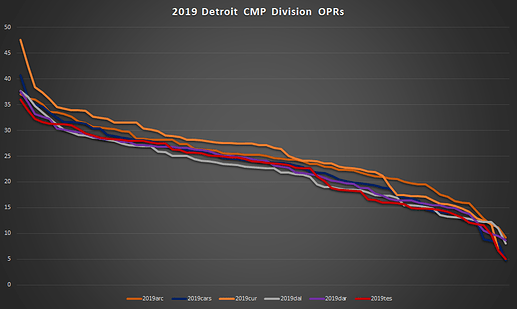 In an ideal scenario, all of the lines would be intertwined, as some divisions have stronger powerhouse teams (at the top ranks), where as other divisions are “deeper” (i.e. the slope of their graph is shallower). With random fields though, it’s clear to see that some divisions are substantially stronger than others, to the point where an OPR of 30 gets you 6th place on Hopper and 20th place on Curie.

I have been an advocate for a while now for using the district ranking system to place teams at worlds. There are relatively simple ways to get around the fact that not every teams plays the same number of competitions. While it may not be perfect, it’s certainly better than random divisions where you can get divisions like Curie this year and Newton 2016.

“Depth of field” generally refers to how quickly the talent level drops off as you go down the rankings. Talent level can be assessed with various metrics, like OPR or ELO. Basically, if you have a “Deep” field to pull from, it means you have lots of good robots. A shallow field means that your talent drops off much quicker with team rank.