Did anyone else catch this in the manual release? 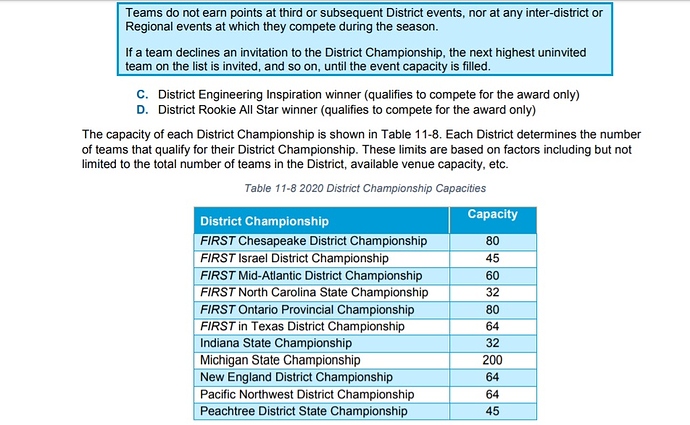 Or how would they do that on the MSC field?

I mean I guess that could be 50 teams per field. I believe that is 40 more teams. But yeah, idk where the 5th could fit, so I assume maybe just in increase per division.

But FiM round robin would be fun…

50 teams/field isn’t unreasonable. All y’all in districts are just spoiled.

50 teams/field isn’t unreasonable. All y’all in districts are just spoiled.

Yes, that’s why we continue to brag about discuss it.

12 matches is the way to go. Makes the whole event go so much better. This is something FiM has always made a requirement for all events in the past, I would be surprised if this was shortened.

Yes definitely need to keep the 12 matches, start earlier with matches on Thursday, and let everyone get their 12 matches. Hopefully the rankings will work out with 50 teams per division.

Cover the Football practice field. Five fields set lengthwise, bleachers on both sides. Pits in the arena where the fields used to be. .

I don’t think that would happen, still looking at 4 fields I think. Seating is going to get really tight.

Yes, there was some discussion about this earlier, in an existing thread. The topic is interesting in its own right, so could a mod please move those posts over here?

Is SVSU building a new facility?

Our spring break is during that week, so I’m fairly sure that they aren’t planning on all Juniors requiring testing that Thursday… Every school is given a range of dates for testing an is able to pick a day that best suits their schedule whether it be on National Testing Day or not. Just because the school you are associated with tests that day doesn’t mean everyone else in the state does.

Each district is also required to offer makeup dates for testing for students who are ill or unable to attend. We have used this date the one time that our testing landed on a competition day and we had a few students miss their tests (I think they only missed MSTEP or Workkeys though).

As someone who was involved with the initial organization when MSC first moved to SVSU, I can say this is unlikely to ever happen.

SVSU has made it very clear that they do not want robots (or machinery in general) on the turf in the fieldhouse, due to concerns about getting debris in the turf, and subsequently having people get it stuck in their feet (they have various groups that use the field without wearing shoes).

The seating situation will be especially interesting, considering the event was already up against the limits of what the fire marshals would allow, and there isn’t really any room to expand the bleacher sections.