254 Lockdown had a question on this here:

We want the majority of the weight to be on the traction wheels, so the drop acts as a bias. It also gives insurance against inevitable dips or rises in the floor.

I might just be being dumb, but even based on their explanation, I’m not sure why they had to go with omnis. The reasoning they provide is wanting the robot to ride on the traction wheels and not get beached.

These are drive bases from 254 in 2018 and 2019. The support bars and the bumper rail are flush to each other, and it seems to also have some space so the wheels don’t rub against the back of the bumpers. 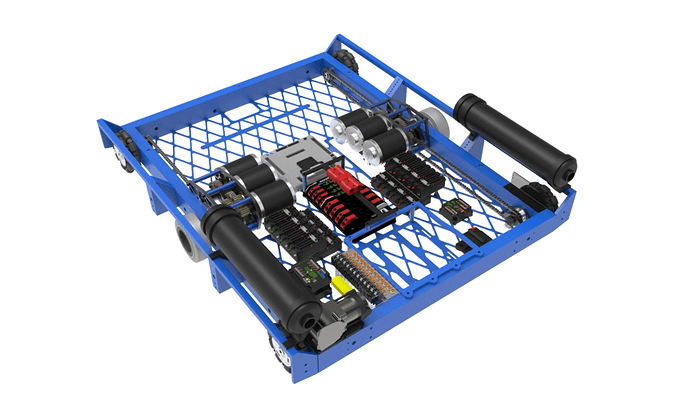 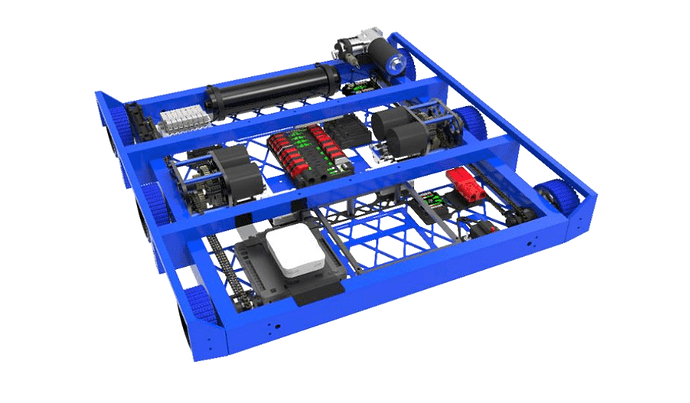 I put the mounts above the wheels because of the suggestion from GalactechGoat above.

This is what I was planning on doing, good to know that this mostly mitigates the issue. Thanks

This looks great, thank you

will turning be okay with 6 pneumatics?

Can’t say on pneumatics, but we used 6 Colsons with 1/8" drop. No problems turning.

The thread I was reading specifically mentioned it being an issue with pneumatic wheels because of their compliance. I’ll see if i can find the post

Our team is considering using pneumatic wheels on our drivetrain this year. Since this is something that we do not have a lot of experience with, we were wondering what other teams, who use pneumatic wheels, have used for a drop center. We are planing on using either 6 or 8, 6 in wheels available from west coast products https://www.wcproducts.com/pneumaticwheels. Our main design criteria is- -We want our robot to be able to cross the boundary on the shield at full speed without damaging our r…

You did 1/8"… but what type of wheels did you use? When you use harder wheels (KOP traction wheels, AM Performance wheels, Colsons, etc) you can get away with less drop, but when you use wheels with more give (like the pneumatic wheels that were so popular this year) you need a larger drop. You need to take into account wheel compression, otherwise your center wheel will compress, allowing the outer wheels to touch the ground!

When looking at how your robot will turn draw a picture of your wheelbase from the top. Then draw a circle from the center of your robot through all your wheels, this is the path your wheels take as the robot turns. If the wheelbase is longer than it is wide your outer wheels will literally be dragged sideways while you are turning. This makes for very slow and inefficent turning (if at all). Your problems: You are using pneumatic wheels. While they make it more difficult to be pushed they a…

Pneumatics and omnis is an interesting combination. If you don’t think drop center pneumatic will cut it, I would probably do plain (drop center) traction wheels instead.

Good point about the squishiness of pneumatic tires.

What are the factors that lead people to choose pneumatics? We’ve been using Colsons but perhaps we’re missing something? I must admit the nitrile wheels on SDS’s latest swerve offering look very interesting.

I’ll typically suggest Pneumatic tires when we want to play the pushing/defensive game.

So I’d set up a 4 wheel drive pneumatic tire drive with the robot as heavy as possible (120+heavy bumpers) driving wide (wheeltrack wider than wheel base) as this makes it easier to turn.

Normally people use pneumatic tires for traversing obstacles, the squish of the tire helps the robot carry speed over bumps and acts like suspension that reduces the impact on the rest of the robot. Blue nitrile treads are awesome and super grippy, we used them in 2020 on AndyMark performance wheels and the robot drove better than any of our past robots.

This year, we used six 6" pneumatic wheels. The total drop of the center wheel was 1/4" since the tires are more squishy than colsons, but we actually achieved this drop by raising the front & back wheels by 1/8" and dropping the center wheel (and the gearbox) by 1/8". We had a tall, heavy robot and had no trouble turning.

The reason we chose pneumatic wheels over colsons was to reduce the intensity of the impact with the 1" steel beams on the field. When we tested driving over the beams with 6" colsons, it was very jerky and we were worried it would cause other issues over time. Since the reason for using pneumatic wheels was for hitting the bumps more safely, I agree that it seems counterproductive to use omnis in the front.

We’ve had a strange love affair with pneumatic tires. Specifically red ones. They’re super snazzy, but I’m not all that convinced that were necessary in any year other than 2016.

Agreed, exaggerate the drop for pneumatic -quarter inch doesn’t sound unreasonable. You can also cheat by over-inflating the center wheel, and under-inflating the outside ones.

254 is using 6, 6" pneumatic wheels for the same reasons Brandon brought up. We have a short but heavy robot and are getting away with 3/16" of drop.

In 2018, we ended up with both center-drop and omnis largely by accident. We had originally planned on 6 Colsons, but our we found adding the omnis helped with turning, especially during the super-long 4-cube and 3-cube autons.

Also note that the render there show a Colson in the middle, when we ended up using blue-nitrile by the end of season because of increased reliability in encoder count tracking independent of the direction of the carpet weave.

254 is using 6, 6" pneumatic wheels for the same reasons Brandon brought up. We have a short but heavy robot and are getting away with 3/16" of drop.

Is this a C-C drop of the bearing bores, or measured off the full weight robot? Pneumatic tyres like to play tricks with this stuff.

3/16" vertical center-center distance as milled on the frame rail.